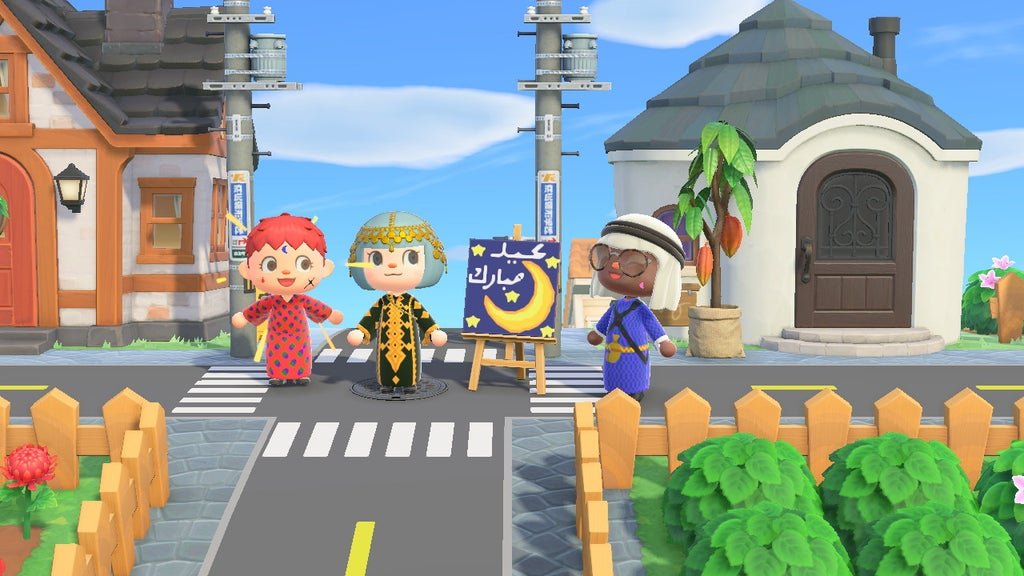 Today is Eid al-Fitr, the Muslim holiday that follows the holy month of Ramadan, where Muslims spend each day abstaining from food and water and spend extra time on reflection and spirituality. Normally, this is a day of huge gatherings, both at the mosques and at family and friends’ house, and plenty of food.

With the current pandemic, restrictions prevent just about everything that makes Eid special to the community. Yet, as we all know, life finds a way. Animal Crossing: New Horizons has been a popular destination for Muslim gatherings both during Ramadan and throughout today’s Eid celebrations.

I made myself a little Suhoor/Iftar spot in Animal Crossing for Ramadan this year. If anyone feels like dropping by, DM me around those times & come sit around a bit!

The month of Ramadan has just wrapped up, spent entirely in isolation. Again, this is normally a time of frequent gatherings at mosques and in households. During the daylight hours, from dawn until dusk, Muslims fast, which means not consuming any food or drink. There is a meal in the morning, called suhoor, and a meal at night, called iftar. Many will stay up the entire night between the two meals and work on their spirituality by praying and reading the Quran.

So what happens when Muslims can’t get together during Ramadan and Eid? They hang out on each other’s islands in Animal Crossing!

Rami Ismail, one of the game developers behind games like Super Crate Box, LUFTRAUSERS, and Nuclear Throne, set up a calendar so others could join him on his Animal Crossing island for suhoor and iftar on Mondays, Wednesdays, and Fridays. This was open to everyone (not just Muslims) and was wildly successful, with others doing the same thing.

It also gained a lot of traction, with plenty of interviews and articles being written about the gatherings. Instead of just regurgitating that information, I’ll link them here. Imran Khan discusses his experience with Rami’s gathering in the Washington Post, as well as some great insight into the experience from Rami himself. Buzzfeed reporter Ema O’Connor also wrote about the virtual gatherings and had a delightful conversation about Islam, Animal Crossing, and the coronavirus.

Finally, Vice News did a video interview with Rami, both inside and outside of Animal Crossing. It’s kind of adorable to see their avatars react based on what they’re saying to each other in real life. They bring up an interesting idea: could Ramadan be put into Animal Crossing as an actual event? Bunny Day is basically Easter, a Christian holiday, and there are plenty of Christmas related things in the game as well, like Jingle. While not explicitly Easter and Christmas, these two religious holidays do set a precedent with their presence within the Animal Crossing world.

But now that Ramadan is over and Eid al-Fitr has begun, the celebrations in Animal Crossing have not stopped! The header image of this post is from this reddit thread of someone quarantined in Saudi Arabia having an Eid celebration with their friends in the game. Searching through Twitter, this has become a common occurrence.

The game actually has a couple of common Muslim wardrobe items like kandooras and kurtas, and many people have gone on to make their own designs and share them with the world. Sharing photos of yourself in your Eid outfit (think of it as a “Sunday’s Best” but for Muslims) is common, and it’s great to see that the tradition has carried over to Animal Crossing.

In terms of prayers, many of Sahara’s small rugs are the perfect size for the prayer rugs that Muslims commonly use. Though they are often labeled as bath mats, they’re identical in size to prayer rugs. Many have even found clever ways of integrating the use of a hijab, like Sara Alfageeh’s turnip-head solution. It makes me wonder if Animal Crossing would ever add things like head coverings officially into the game, though that may be a big ask for a game series that just let people of color create an avatar that looks like them.

This year’s celebrations across the world, whether they be birthdays, marriages, or religious events, have been dramatically changed. Thankfully, people have proven to be super creative with the technology at our disposal, and in particular, the tools available in the latest Animal Crossing. Nintendo has created an escape from real life that has been a boon to people in a time of social distancing and isolation. Perhaps none are more appreciative during this past month than the nerdy Muslims of the world, as they share Dodo Codes and celebrate their spirituality together.

Eid Mubarak to all those who celebrate, whether it’s on a virtual island, online video chat, or together with family. Or maybe I should say quarant-Eid Mubarak? Eh, eh? Has anyone made that joke yet? At least it’s better than Quran-tine…