They won’t affect your actual game, but they’re fun additions

Wizards of the Coast has been busy with Dungeons & Dragons since fifth edition came out a couple years ago. With five full adventures out (including the recent Storm’s King Thunder, which I haven’t had the chance to play through yet), Volo‘s Guide to Monsters releasing in a week or so, and all sorts of other projects, no one can say the team is slouching. Third-party books are starting to drift in to fill the gaps between releases, and I received two of them for review. Candlewick Press’s Dungeonology and Monsters and Heroes of the Realms: Coloring Book aren’t designed to supplement your game, but they’re fun to flip through for fans of the multiverse, and both look great on a coffee table. 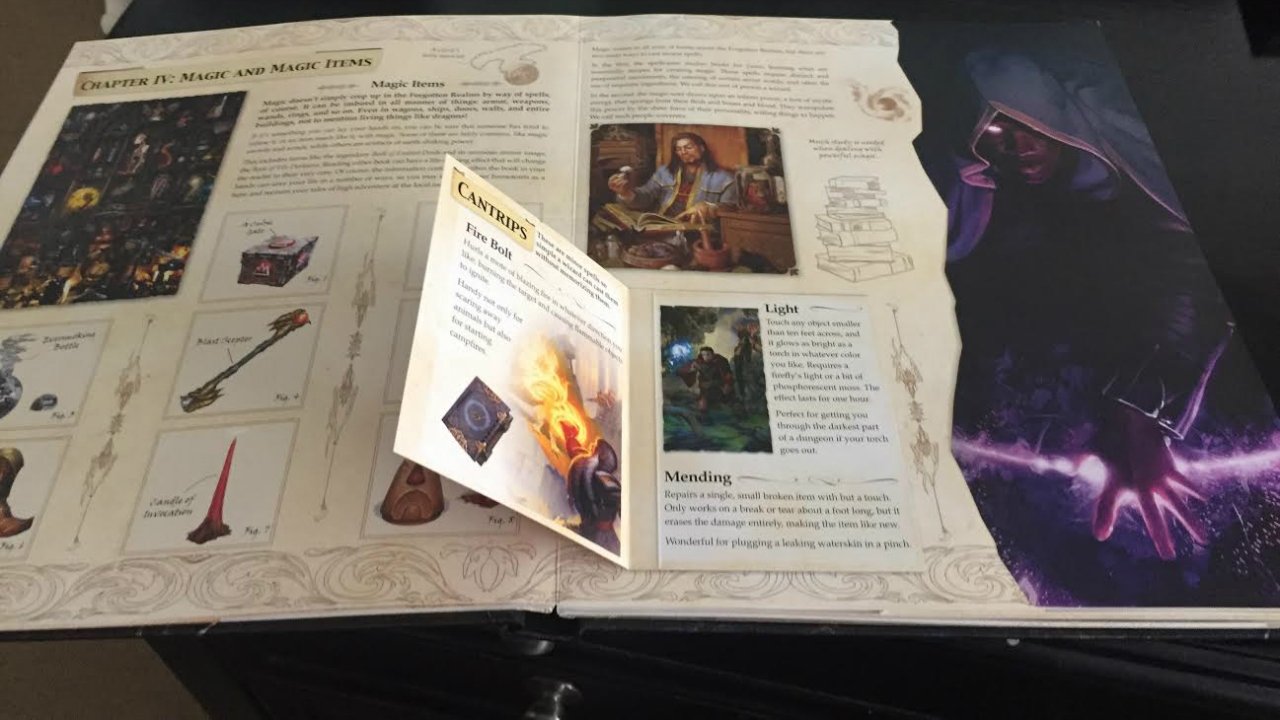 It’s best to think of Dungeonology as a hybrid between a light source book for the Forgotten Realms campaign and an overview of D&D in general. It’s all told through the perspective of Volothamp Geddarm as he describes what the Realms are like, and how parties form up, gear up, and the monsters they might face. Chapters include topics like equipment, magic items, factions, treasure, and notable heroes.

What’s cool is that just about every page has an interactive element to it. The magic section has a small spellbook attached that you can flip through, there’s a gigantic foldout map, and there’s even a small cornucopian bag of holding that you can reveal. For this reason, the book will skew towards a younger audience, but I’m a huge dork and got a kick out stuff like opening small sealed letters to read what the Elminster of Shadowdale had to say.

For the most part, the text isn’t dense like you might expect from the Player’s Handbook or the Monster Manual. This is very much a surface-level examination of D&D, so don’t go into this looking for ways to improve your play as either a dungeon master or adventurer. Dungeonology is certainly an eye-catcher, and whenever my friends spot it, they’re immediately compelled to flip through, even if it’s only for the great art (mostly from previous books) and interactivity. I read through a few Amazon reviews that were upset that this doesn’t provide info for playing the game, but that’s not what it’s intended to be. If you know what it is going in, $20 is a great price for this. 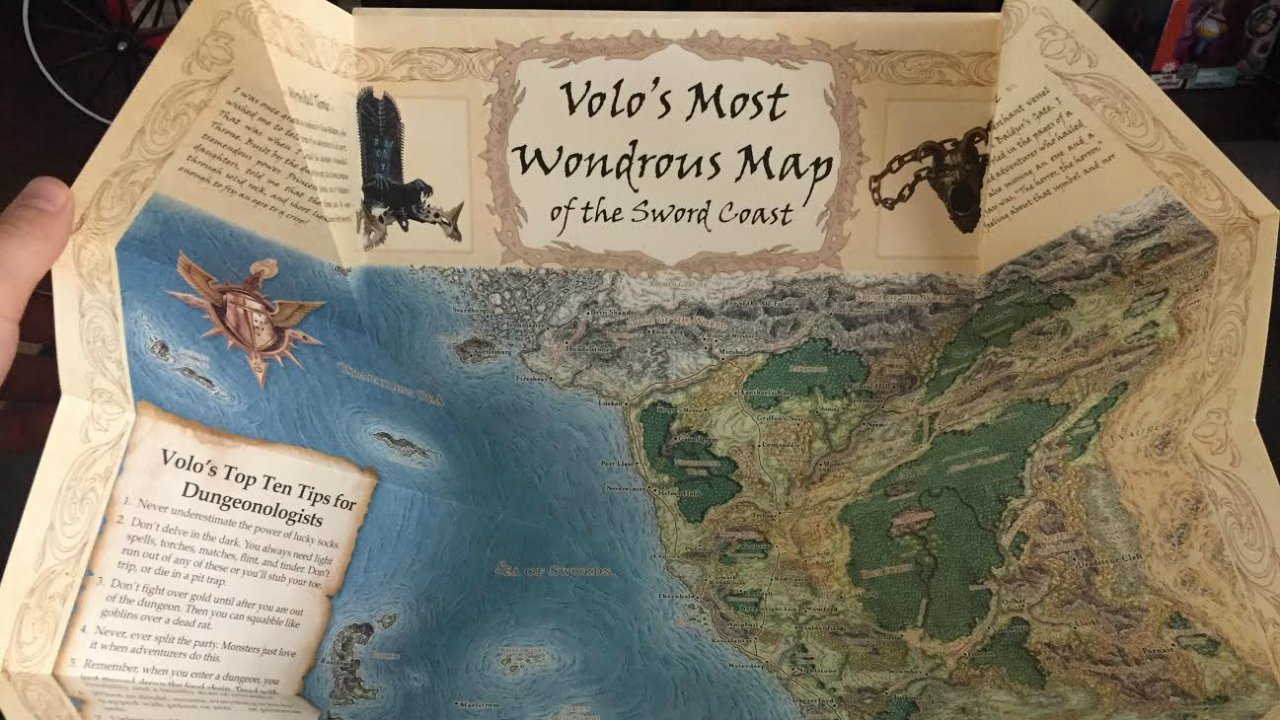 Before we talk about Monsters and Heroes of the Realms: Coloring Book, there’s something you should know about me. I’m an awful artist in all ways: drawing, painting, some of you are thinking writing, and even coloring within the lines are all skills that completely escape me. As such, I’ll probably never actually try to use the coloring book for its intended purpose.

The idea of a D&D coloring book is charmingly nerdy, and because this type of activity is inherently childish, I imagined simple drawings of cartoonish Beholders and Goblins. I was surprised to open it up and find that it’s mostly elaborate art from previous sourcebooks, decolored for your pleasure. This means two things: it’s great to flip through and be reminded of how cool some of these images are, and also holy shit even someone good at coloring would have a hard time with this. Because of my admitted lack of skill, I found this daunting. However, my artistically-gifted girlfriend is looking forward to slowly filling it out. 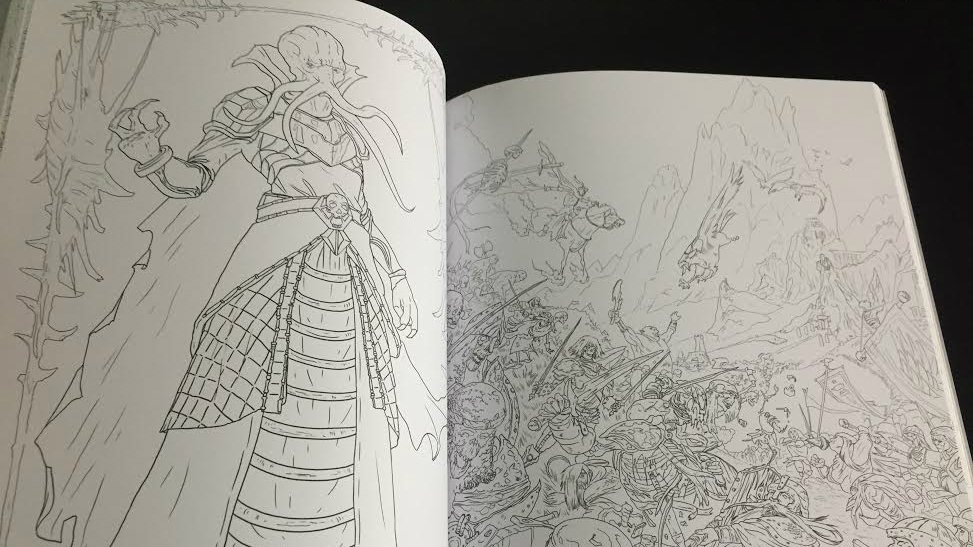 Because of the relative complexity of the art in Monsters and Heroes of the Realms, this isn’t quite as well-suited to children as Dungeonology is, unless your child is supremely gifted. Again, great coffee table book though, if you’re okay with letting your nerd flag hang out in your house. It’s under $15, so it’s not too hard to justify.

If you’re looking for more books to improve your D&D games, Dungeonology and Monsters and Heroes of the Realms: Coloring Book aren’t what you need. You’ll want to wait for Volo’s Guide to Monsters, coming out next week. However, if you want to supplement your knowledge of the Forgotten Realms, or entice someone new into the world of roleplaying, Candlewick’s latest offerings might do the trick.

Filed under... #Dungeons and Dragons#Tabletop#Wizards of the Coast