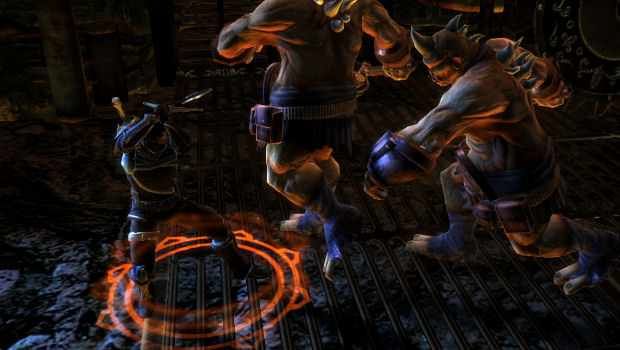 It’s very rare these days for a game to be PC exclusive, with titles that previously dominated the medium making their way to consoles. Dungeon Siege III is no exception, heading to PS3 and Xbox 360 as well as PC. According to Obsidian associate producer Nathan Davis, however, the game should satisfy any gamer, no matter their preference.

“In a lot of ways, making Dungeon Siege III has been a fairly typical multiplatform production with all of the advantages and challenges that come along with it,” he explained. “All of our developers test their work on the consoles so they get a lot of attention.”

We asked if cross-platform co-op was a possibility, too. Turns out it was possible during tests, but not anymore: “Our initial prototypes actually could play with different systems, but that was strictly for internal testing. The current online infrastructure does not support this kind of gameplay feature so it’s out of our hands.”

Davis also addressed the typical PC gamer concern that controls would be universally “dumbed down” for the console gamers to cope.

“I think PC gamers have completely valid concerns,” he stressed. “Control-wise, we developed a pretty slick system to make one of the most important pieces of the PC gamer’s arsenal, hotkeys, accessible and fun on the PS3 or Xbox 360 controller. By using the bumpers and triggers to change stances and empower abilities, our Lead Designer, Nathaniel Chapman, created the versatility of hotkeys on console controllers.

“This control scheme gives the game the best of both worlds. It’s easy to pick up but complex enough for a hotkey master. As far as our graphics, high end PCs can always take advantage of a little extra fidelity, but I think you’ll find that our engine, Onyx, performs well on each system.”

So there you go. Whatever your poison, Dungeon Siege III ought to work out just fine. I’m sure that won’t stop some dedicated PC gamers from moaning about something, though. They love doing that more than playing games.