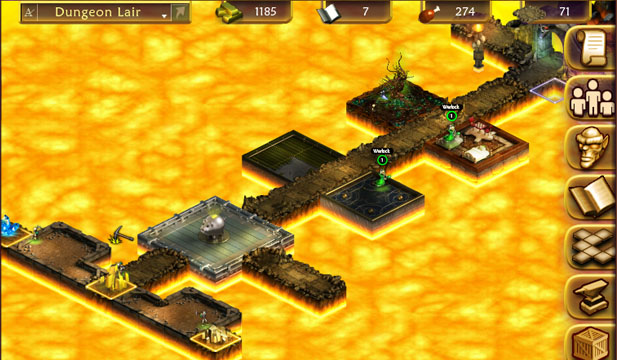 Sony Online Entertainment released a new social game by Night Owl Games on Facebook called Dungeon Overlord. It’s basically Dungeon Keeper for Facebook. You build a dungeon by building rooms and hallways on tiles and by upgrading them. Build a Tavern to attract Thieves for instance, or build a Library to spawn a Warlock who needs a bed to sleep in. You can even rename your creatures for a more personal touch.

Income comes from gold, crystal, iron and food. Goblins will scurry around to mine and build your rooms, which gives the game a bit more of an active feel than CityVille and the like. The usual social game timers come into play with resources generated and consumed every hour, or spawn times for new creatures when you unlock their prerequisites.

The game offers a lot of information to manage, which makes me feel like it’s more directed at a “hardcore social games” crowd than your average soccer mom. There is also an overworld which tells me I can invade towns and castles with Orcs, while Warlocks provide research points you invest in technology. It hints at a long-term social game with more than depth than you would expect. What madness!

It’s still in beta and some things are a bit obtuse, like resources being dropped on the ground that you can click on. Are they bonus resources? Do I need to click them? Is this thing on the ground an item or just artwork of a room? And why is there no Crystal or Iron counter? It’s certainly a different breed than your typical Zynga design though, so if you are into social games and Dungeon Keeper it might be worth checking out during an hour of boredom.