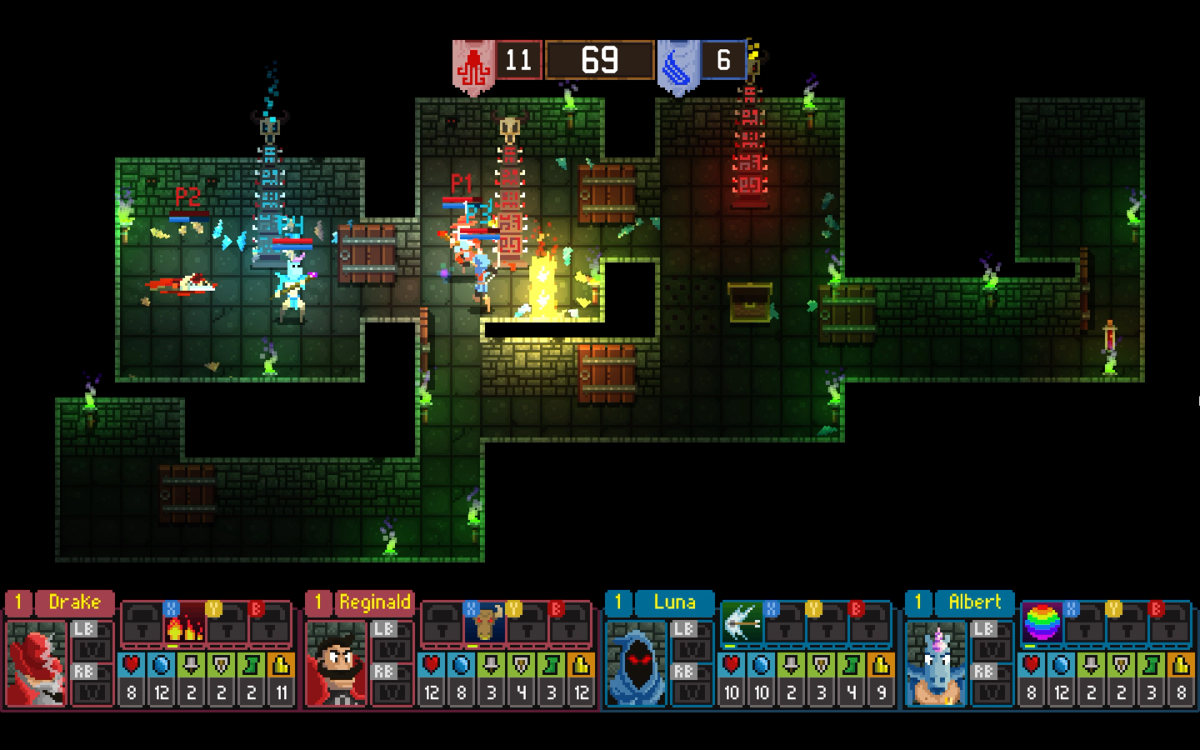 What happens when you turn hardcore RPG gameplay, with hints of roguelike elements, into a sport? Imagine having to grind and acquire loot in order to score points and one-up your competition. Sounds pretty wild for an action-RPG, right?

That’s what developer Christopher Yabsley has been making in his spare time. Dungeon League has turned the traditional fantasy role-playing game setup into a sporting event for the amusement of an evil dungeon master, and there are many adventurers lining up to compete.

Just released on Steam Early Access, Dungeon League is unusual but incredibly fun. It’s a an odd mix that surprisingly works well, and it’s one of the cleverest takes on the genre I’ve seen in a while.

After a dungeon master expresses disappointment with seeing that heroes have lost interest in his labyrinths full of traps and other dangers, he decides to turn his creations into a competitive sport in order to attract adventurers seeking gold and glory. With the creation of the Dungeon League, travelers from all over flock to his randomly conjured deathtraps in order to acquire gold, defeat the opposition, and come out on top.

Designed with local multiplayer in mind, Dungeon League re-contextualizes the dungeon-crawl setting and shapes it into an old-school RPG battle arena. From the standard deathmatch variants, territory capture, to the more unusual race gametype, which tasks players with dashing through checkpoints around the dungeon while taking swipes at the opposition, the game does a lot of cool things to the roguelike gameplay system. As you acquire gold and experience, you can level up between matches, upgrade skills, and buy new items from the league vendors. In traditional roguelike and MOBA fashion, character growth is all from the ground up in every game, so you’ll have to prioritize which areas you want to focus on.

In case it wasn’t clear, Dungeon League is very self-aware with its approach to the dungeon crawler. There are several different classes to choose from — such as the traditional archetypes like Warrior, Rogue, and Archer — to more bizarre classes such as the rainbow-spewing Unicorn. It’s a rush to fight through dungeons filled with nasty traps while cutting down hoards of monsters that get stronger with each stage. It’ll take a lot to stay a step ahead of the opposing side and become the champion of the Dungeon League, so choose your class wisely.

It’s not often we get a unique take on the dungeon crawler, especially one that doesn’t take itself too seriously. I liked how lighthearted things are in Dungeon League despite all the over-the-top action and bloodshed, and had a blast battling it out with friends. While there are some single-player options where you can battle waves of monsters, the real draw here is multiplayer, and Dungeon League is quite clever in its design. If you’re looking for something a bit different that channels the old-school RPG aesthetic, then this is one you’ll want to keep an eye on.