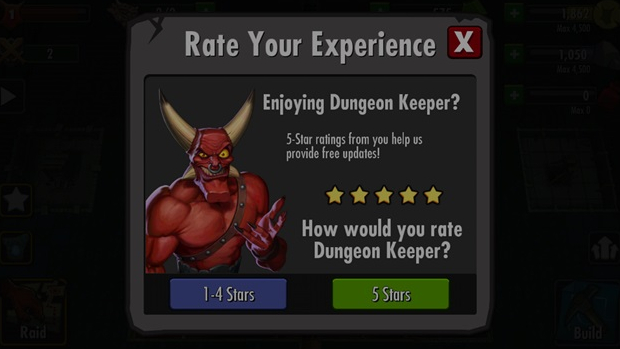 Dungeon Keeper is not good. It’s a sleazy release that has been mostly skewered. It has a high rating in the Apple (4/5) and Android (4.5/5) app stores, however.

On the Android side, trying to rate Dungeon Keeper any less than a 5 stops you from doing so and sends you to a feedback form, which plenty users undoubtedly don’t want to bother with and end up not rating it at all. EA explained this design decision to Gamasutra.

“We’re always looking at new ways to gather player feedback so that we can continue to improve our games. The ‘rate this app’ feature in the Google Play version of Dungeon Keeper was designed to help us collect valuable feedback from players who don’t feel the game is worth a top rating. We wanted to make it easier for more players to send us feedback directly from the game if they weren’t having the best experience. Players can always continue to leave any rating they want on the Google Play store.”

Sneaky sneaky. EA had a great answer that sounds good, yet the system still undoubtedly inflates the user ratings.