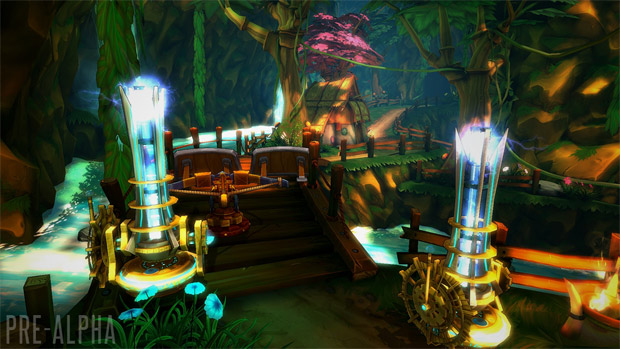 Ahead of PAX East, Trendy Entertainment has announced Dungeon Defenders II for Windows, Mac, iOS, Android, and web browsers. After a bunch of ports and even more DLC, it was only a matter of time before a follow-up happened. While the core tower-defense premise remains the same, there’s now a multiplayer online battle arena mode as well.

There’s a lengthy FAQ about Dungeon Defenders II, but I wanted to point out that heroes, gear, etc. in cooperative play will carry over to this new multiplayer mode. “Our take on the MOBA genre is more RPG-esque, with more hero customization, persistent hero leveling, loot and a town square where players can socialize, manage their heroes, shop, trade, and queue for matches,” reads the FAQ. “We’ve drastically simplified the item system, to reduce the learning curve for new players and are aiming for shorter total match times.”

This time around, the studio is going the free-to-play route with the intent to “provide the same amount of content at around the same price as the original game.” Expect free heroes to be on a rotation system and, ideally, a much larger player base as a result of the pricing model. While DD never quite clicked with me like Orcs Must Die!, this sounds really intriguing.