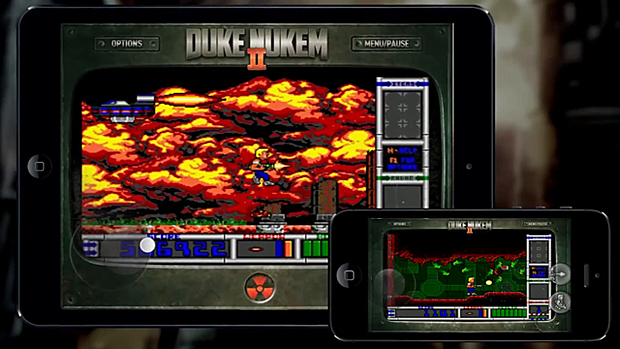 3D Realms is back, and that can only mean one thing — Duke Nukem. To celebrate the 20th anniversary of Duke Nukem II, 3D Realms and Interceptor Entertainment have announced a upgraded re-release of the ’90s game for iOS devices.

“Before Duke Nukem 3D, before the sunglasses, before the one-liners, and before the strippers – many gamers never knew there was another incredible alien ass-kicking Duke game, a cutting-edge game for its time that still holds up 20 years later,” Scott Miller, CEO and co-founder of 3D Realms states.

Check out the tounge-in-cheek trailer telling us about some of the game’s key features, such as “smooth side-scrolling action,” “insane VGA graphics,” and “256 eye-popping colors.” Throw in 32 levels into the mix and you can this strong dose of testosterone-pumping nostaglia for a cool $1.99. It looks like it could be fun, but will a retro 2D, non-line dropping Duke be enough to erase the memory of, you know, that other game, and get fans playing Duke Nukem again?