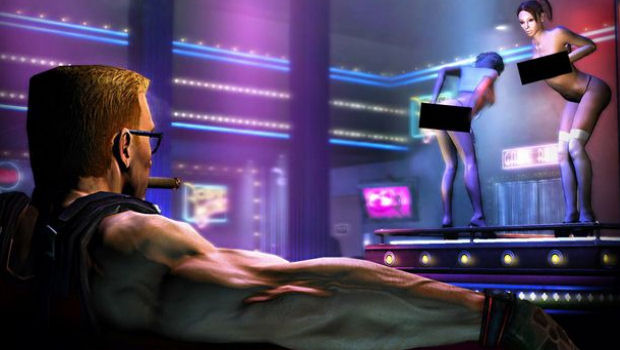 [Update: I’ve been informed you actually carry the babe over her shoulder, and have to spank her little muffins in order to stop her covering your eyes with her hands. Less violent, probably not less sexist.]

Details of Duke Nukem Forever‘s multiplayer component have appeared online (via the Duke4 forums), and while they seem like fairly standard gametypes, one mode in particular may cause more than its fair share of controversy.

“Capture the Babe” involves players grabbing a woman who occasionally “freaks out” and requires slapping in the face to calm her nerves. I’m sure you can all see where that’s going to lead us. In any case, here are the full details:

It sounds like the whole multiplayer mode will be fairly basic stuff, with the exception of that face-clapping match. You’re either going to find that hilariously offensive or just plain offensive. What side of that fence are you on?