Rebooting the Army of Two series with producer Greg Rizzer

“We really pimped out the whole gun customization this time around.”

That’s what Greg Rizzer, producer of Army of Two: The Devil’s Cartel first told me as I sat down to get hands-on time with Visceral Games’ latest entry in the series.

Yes, Army of Two: The Devil’s Cartel continues the series’ tradition and includes a legion of gun attachments and customization options. Everything from your weapon’s stock, barrel, scope, magazine size and color are customizable, with more options included than ever before for the series. And yes, even the shield attachment returns, though such an attachment will have varying effects on your character’s movement and turning speed.

The series’ main characters, however, Elliott Salem and Tyson Rios, are not returning to The Devil’s Cartel — in playable form, anyway — and are instead replaced by Alpha and Bravo. That’s because the latest installment is a reboot of the series, and given the nature of the game’s plot, this omission was for the better. 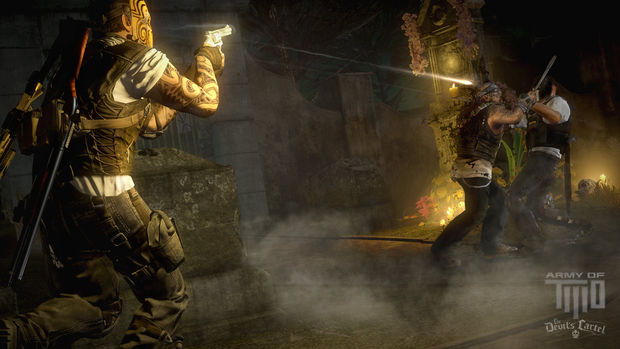 Set in Mexico, The Devil’s Cartel takes place in midst of cartel wars and assaults, and Rizzer said the team at Visceral Games didn’t feel they could accurately portray the seriousness of the situation with Salem and Rios as the game’s main characters, even with the game’s gore being over-the-top.

“As much as the graphic violence is over-the-top and very ‘Hollywood,’ as I call it, the story itself is dealing with something that is actually in the headlines and realistic, so we didn’t want to have the guys ass-slapping and playing air guitar in a Mexican cartel backdrop,” Rizzer said. “Again, they will have their banter back and forth, but that whole dude-bro mood [from the first games] didn’t fit in the kind of story we wanted to tell.”

Sure, Rizzer knows there are people who enjoyed the more playful and silly nature found in the previous Army of Two games, but added he also knew Visceral had an opportunity to reach more people if they toned that element down a few notches.

“We wanted to keep it in the style of Lethal Weapon or Bad Boys — that vein of comedy. Not over-the-top, super silly, but still good cop-buddy kind of comedy,” Rizzer said.

A different kind of co-op for the series

“We took what we thought worked [from the first two games] and took out what we thought didn’t — for instance, the Aggro system is still there, but now it’s under the hood.”

As mentioned in our hands-on preview, the Aggro meter — which displays on which character the enemies are focused — is replaced with the Overkill meter, which, when filled, turns your character into a damage-dealing tank. Even though this sounds potentially game-breaking, the meter does take some time to fill, and Rizzer assured me the team worked through its kinks to make sure the balancing was just right.

One of the gameplay mechanics most prominently advertised during the release of the first Army of Two title was the ability to go back-to-back, a mini-game of sorts which had both players putting their backs to one another and laying waste to their surrounding enemies. It was a feature that I thought worked quite well, but to my surprise, it’s one of the many co-operative gameplay elements not returning in The Devil’s Cartel. Parachuting is also not returning, though fortunately, the riot shield ability is.

The Devil’s Cartel is in many ways breaking away from the norm of co-operative shooters, even going as far as having an emphasis on breaking up the team more often as opposed to keeping them together.

“We actually found that one of the coolest things is splitting the players apart to do separate things, and when they come back together it actually makes the co-op experience feel that much stronger,” Rizzer said.

Set-pieces and “one-off” moments will still be found in The Devil’s Cartel. 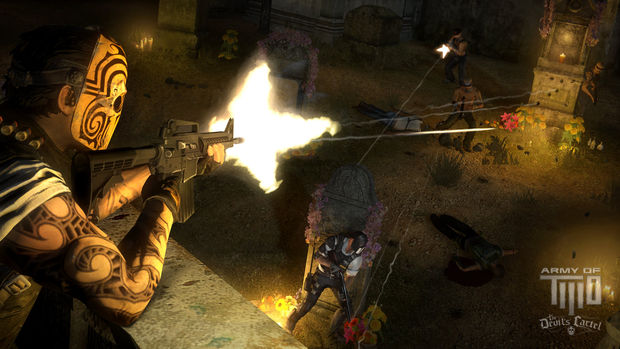 Unlike past games, Army of Two: The Devil’s Cartel won’t feature any sort of competitive multiplayer component, as the team at Visceral focused solely on the co-operative experience this time around, Rizzer told me. The only sense of competition will come in the form of “co-opetition,” as Rizzer calls it, as at the end of each checkpoint both players will have their stats accrued –including kills, revives, etc. — and the player who has the most points will have bragging rights for that section.

Rizzer explained that if you really want to play a competitive multiplayer game, there are plenty of good offerings out there.

“I don’t want it to be just a bullet-point on the back of the box where we can say, ‘look, we have competitive multiplayer,'” Rizzer explained.

On the whole, the Army of Two franchise has been the victim of receiving a lot of flak from critics and gamers alike, what with its gameplay and overall style taking the more over-the-top, arcade-shooter route as opposed to the realistic approach many games take nowadays. This notion is extremely apparent in the shooter genre. Rizzer told me there’s a place for both in today’s market, and while realism is great, playing something that’s fun is what’s important.

“People can say what they want about the Army of Two franchise,” he said, “but bottom line is, when you play this game, I feel it’s fun. And with videogames today everyone’s like, ‘we’re the most realistic shooter’ and stuff like that, but how about you just make something that’s really fun?”