Let’s go on a hugventure

One of the highlights of my time at PAX East was sitting down and chatting with Dropsy’s creator, Jay Tholen. Jay’s a quiet, thoughtful man with what seems to be unlimited creative energy at his disposal. His sometimes offbeat, but unquestionably engaging creative force shines through in his surreal point-and-click “hugventure” Dropsy. At first glance, the Devolver-published game may seem as though it could be reduced to a psychedelic walking simulator built to shock or surprise the player, offering no real substance beyond that.

For some players that will surely suffice, and they’ll be very happy playing that game. That’s part of the sly brilliance Tholen’s weaving into Dropsy, in that it can be enjoyed, or perhaps more accurately said, interpreted, on many different levels.

In some ways it functions like a mirror – the observer, or in this case, the player, unconsciously injects something of themselves into the experience, ultimately shaping their perception of what the game is really about. Which is quite refreshing in that the game doesn’t lead you by the nose, telling you what to think; it offers plenty of room for your own interpretations.

Dropsy features a defined story, though it will require a little effort on the player’s part to put the pieces together to form the whole. Like most good stories, it has a beginning, middle and an end. And as such, the game can be played as a straight point-and-click adventure all the way through; but I think those doing so would be missing out on a great deal of what it has to offer.

If you take the time to venture off the preset narrative path, I think you’ll be pleased to discover that the alternate objectives that may seem unrelated to the main storyline are perhaps just as much a reason to play as the objectives that move the game’s plot forward. Dropsy doesn’t waste your time if you choose to do so, though. Unlike typical side quests in games, these have a unique and satisfying quality that are not only fun to complete but offer further insight into this intriguing character in a meaningful way.

The ones featured in the PAX demo that I played were what Jay calls “hug puzzles.” As you explore Dropsy’s world you’ll encounter people from all walks of life, as well as animals from time to time. Each seem to be in some form of distress and it’s up to you to discover the nature of their problems and set about to make things right. 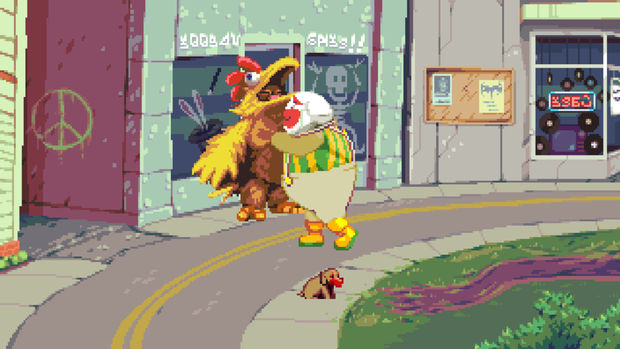 If can you deduce what’s making them unhappy, you’ll be rewarded with a satisfying hug or fist bump from the NPC, and collect their picture to hang above your bed. This gallery functions as a sort of tally board for all of the good deeds you’ve done and the positive changes you’ve made in the world. It’s quite addictive, and one of the most fulfilling side quests that I’ve seen in a game.

The mechanics in Tholen’s point-and-click are what you’ve become accustomed to in the genre – certain objects in environment are interactive, serving to either shed light on the broader backstory of the game, or move the narrative forward. Items that can be collected are stored in Dropsy’s pants. A drop-down menu at the top of the screen allows you to access these as needed.

One of the first puzzles you’ll encounter is a large yellow bird that is blocking the exit from Dropsy’s tent. When you attempt to communicate with it, the bird screams at Dropsy, startling him, and a series of pictures appears above its head cluing you in to the nature of its distress. 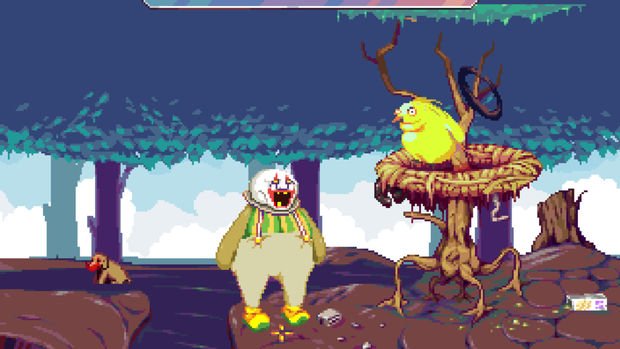 In this instance, the bird is hungry, and it just so happens that Dropsy has recently acquired the snack cakes the bird’s icons indicate. Bring down the menu, select the item required and offer it to the NPC. Now that the bird’s no longer hungry it flies away and the path is clear.

By displaying kindness and an unselfish, caring demeanor in the face of a fearful and prejudiced world, Dropsy overcomes the obstacles that are placed in his path, proving that if given the chance, perhaps love truly can conquer all. This seems to be the central theme in Jay’s game and it’s a beautiful one.

I won’t go further into detail on the particular puzzle elements or the many weird and wonderful characters you’ll encounter in the strangely enchanting world of Dropsy at the risk of possibly spoiling the game for you. I’ll just leave off saying that for those who are planning on picking up this exceptional title, you’re in for something truly special.