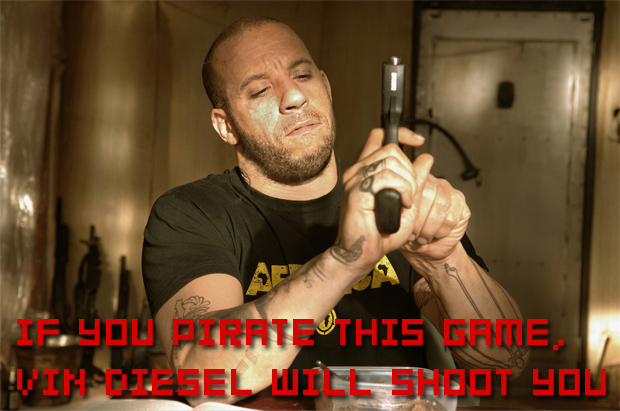 So, Atari has come forward and announced that Riddick: Assault on Dark Athena for the PC is going to come with some DRM. DRM in the form of an activation system. An activation system that lets you install the game as many times as you want on 3 machines, and then it stops working. As you might predict, a lot of people are upset about this.

Atari tried to assure people that it really wasn’t that bad, that no one would REALLY need to install it on more than 3 machines anyway, and that anyone who hit the install limit and had a legitimate reason to put it on a 4th computer could call them and get it all sorted out. However, it’s doubtful that explanation will appease anyone. PC gamers are notoriously resistant to any form of DRM, especially when replacing a component in your computer can mean using up another game install because the DRM thinks that the hardware change means you’re on a new computer.

Atari claims this is to prevent “early piracy”, but sadly for them it will probably just result in an increase. A lot of game comapnies have finally realized how much the inclusion of DRM hurts them, it makes me wonder why certain publishers just can’t seem to figure it out.