Not only does Dead Rising 2 come with an entirely new protagonist, but also a new set of skills. Compared to Dead Rising’s journalist Frank “I’ve Covered Wars, You Know” West, the sequel’s Chuck Greene is quite a different beast with his own skillsets.

While West was handy with a camera, using photography to document the outbreak (and earn experience points to upgrade his abilities in the process), Greene relies on another craft to survive — dude’s a bit of a McGuyver with some duct tape.

The original Dead Rising was littered with items — from guns to lawnmowers — you could use to kill zombies in all manner of creative ways. Dead Rising 2 is no different. In the demo developer Blue Castle Games brought to Capcom’s Captivate press event, you could rarely take a few steps without stumbling across a new item. But Dead Rising 2 ups the ante, allowing you to combine items to create some of the craziest, most satisfying (and sometimes comical) weapons seen in any game to date.

Hit the jump for details on how this works, and to see a quick gallery of some of the game’s potential combinations. 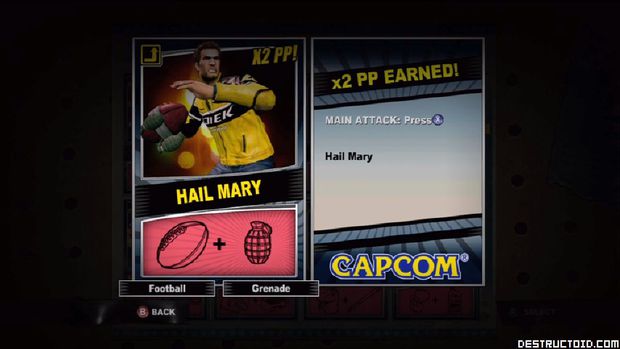 In Dead Rising 2 players will find “combo rooms” spread throughout the game world. It is here where they’ll be able to combine two items on a workbench, and see a small cut-scene of a determined Greene creating an item to rocking metal guitar. While you won’t be able to combine all items, experimentation could lead to some surprising results.

In the demo area I played, the first combination I was shown was simple — a box of nails plus a baseball bat to create the “spiked bat,” a common thug weapon perfect for bashing in zombie skulls. Alternately, you could combine a box of nails with MMA fighting gloves to create the “Tenderizers”; use your imagination to picture what that could do to the face of the undead. 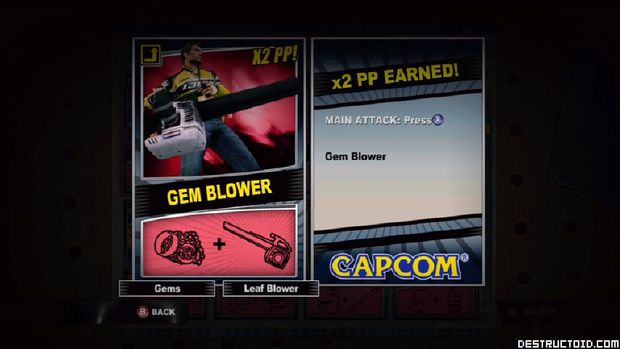 While randomly mixing and matching items could be a bit of fun, all of that experimentation could be a bit time consuming. In order to guide the player, “Combo Cards” can be found throughout the game world, offering up examples of potential zombie-slaughter tools of the trade. While it won’t be necessary to get a combo card to create an item (you could find a list of potential combinations online, for instance), having the card in your inventory comes with a bonus — the player will get twice the Prestige Points (or PP) when using that particular item.

The demo I played came pre-loaded with 17 “Combo Cards,” but the number of items I was able to create within the confines of the small demo area far exceeded that number. For instance, what did I make a with a flashlight and some gems I stole from a jewelery store? A lightsabre, of course.

Blue Castle won’t commit to a the number of in-game combinations, only saying that it would be “a lot.” Examples of some of the weapons, taken from the demos available “Combo Cards” can be seen in the gallery. For a look at some of these items in action, check out our direct feed footage of the game in action (lightsabre and all).