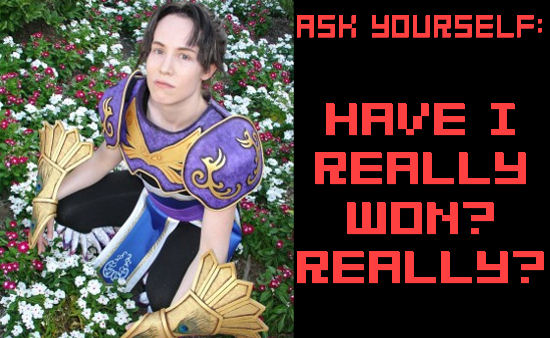 The London Movie Comic Media Expo is a haven for anime geeks and furries who flock by the hundreds in their Sailor Moon underpants. It’s also said to be a little bit rubbish, but this year I have a special reason for wanting to attend. That’s right, Koei will be there and it will be providing playable demos of Dynasty Warriors 6, Bladestorm: The 100 Years War and more.

For the less sane among you, however, Koei is also offering the chance to win a set of 77 Koei-themed pins. The catch? You have to go dressed up like a prancing fairy (as pictured). The first 30 people who arrive at the Koei booth dressed up like a character from any of the company’s franchises wins … in a manner of speaking. We’re all losers when we go out in public dressed like Diao Chan.

I myself will be braving the storm of Manga nerds and sci-fi fanatics to bring you a preview of as many Koei games as I can get my hands on. Special attention will be paid to Bladestorm, which just got a great review on Eurogamer. I am naturally very excited to give Dynasty Warriors 6 a whirl, too.

Oh, and before you ask — no I am not going to go in cosplay. It’s bad enough I will have to share room space with these people, let alone dress up like one of them.