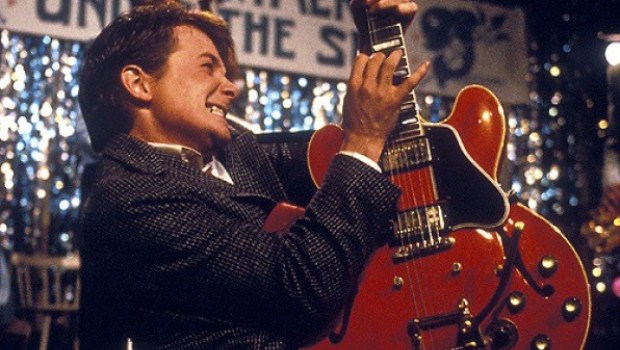 [For his Bloggers Wanted essay response, SephirothX dreams of a world in which the past rules the present and future. Want to see your own words appear on the front page? Get writing! –Mr Andy Dixon]

Pardon the misleading title; I’m not actually going to discuss anything Back to the Future related. I used the name referencing the last great trilogy that’s not been perverted by the 21st century because it seemed fitting for what I want to talk about: the past, and how it can be relevant to the present and future.

Nostalgia is an extremely powerful thing in the video game world. Mario games pump all the nostalgia they can into titles, Ocarina of Time carried the 3DS through its first rough months, Mega Man 9 revitalized the original blue bomber, and HD remakes (such as the recent Devil May Cry HD Collection) from generations past are popping up all the time.

Arguably the biggest selling point of Mega Man 9 was the fact that it was a nostalgia sandwich. It was billed as a true successor to the classic NES Mega Man titles (more specifically, Mega Man 2) and even went so far as to take the game back to its 8-bit NES sprites and sound, complete with sprite flicker. It was a risky move given the high-definition blockbuster age of gaming we lived in, and it paid off.

If there was anything from Mega Man 9 (and, subsequently, Mega Man 10) that I wish would have caught on more with the rest of the gaming world it was the “throwback look”. I’ve always felt that when gaming moved away from sprites a certain bit of charm was lost from video games that has never really be recaptured. (This is also why I’ve always warmly embraced sprite-based games such as BlazBlue). Maybe I’m just a sucker for returning to my childhood but I’ve always felt that, in certain ways, when you impose more limitations on developers in terms of what they can do artistically or musically, the more you tend to see who the truly creative people are out of the bunch. When you hear the amazing musical tunes of an early Final Fantasy title and realize the technical limitations that were in place, your jaw simply drops. Heck, technical limitations are what turned Metal Gear into a stealth game instead of an action title. Beyond the magic of finding out what developers can do after telling them what they can’t do, there’s just a certain charm to the old-fashioned sprite based-games that almost can’t be described.

My main dream is that I wish more games like Mega Man 9 existed. I know a lot of retro titles still come around, especially in the indie game world, but I would just love to see more throwbacks from other major developers.

One thing I’ve always had my hopes on, especially after Mega Man 9, was a revival of the Mega Man X series in a similar fashion. I’d gladly pay Capcom money to see Mega Man X return and continue his quest to stop the Mavericks once again in classic 16-bit SNES glory. I’ve always felt that the X series, at least the original four titles, were superior games to the classic series and would love to see a continuation of that.

Branching away from Capcom specifically, you know the one thing that disappointed me the most about New Super Mario Bros. Wii? (Well, besides its pitiful difficulty.) NSMBW was in every way a game that paid homage to the classic NES-era Mario titles; the end-of-level flagpoles were back, the Koopa Kids were wreaking havoc again, we had mid-world fortresses (that were only missing the ever non-threatening Boom Booms), we even had a freaking airship level here and there! The problem was that all of these nice throwbacks were covered in an almost too clean and friendly-looking modern day polish. I say “too clean” because everything about NSMBW’s look felt like Nintendo kept things extremely safe. Colors didn’t pop out at all and the music was extremely bland. Despite how genuinely great New Super Mario Bros. Wii was there was absolutely nothing that was memorable about the game at all (except maybe the 4-player co-op). I’d even argue that the Super Mario Bros. 3 cartoon show had more memorable moments than this game had.

What would have made NSMBW stand out, you ask? How about stripping away everything from the game on a cosmetic level and replacing it with an 8-bit makeover (or 16-bit, if you’re one of those kids who preferred All-Stars)? Yes, if they would have gone this route you’d most certainly have people complaining that the game used nothing but nostalgia to sell itself, but when you think about it, didn’t the game do that already? There’s a saying called “go big or go home”; I figure if Nintendo is going to go for a Mario game that harkens back to their 80s Mario games (which, for the record, was their prime) then why not go for the gold and make it a game that belongs alongside those 80s classics? Plus, in this specific case with Mario and the Wii, you’d also (in a roundabout fashion) circumvent the issue of Wii games looking bad on HDTVs by intentionally dating the look on your game.

Like I said earlier, maybe I’m just a sucker for my childhood, but I think a surge of true retro games would have a welcome place on modern consoles. Who wouldn’t want to see a true successor to Super Mario Bros. 3 or Super Mario World? Or better yet, what would happen if modern day Hideo Kojima decided to make another Metal Gear game like the original MSX2 version?

Think about this as well: how many developers lately have left their big studios to found smaller groups and work on smaller projects like mobile phone games, which share more qualities with classic games than they do modern games? If you ask me I’d say a lot of developers would welcome a chance to work on a fun retro title, if not for the old-school thrill, then to be free of some of the burden that comes with producing AAA blockbuster titles.

And you know what? I changed my mind about not mentioning Back to the Future at all; I’m going to link you to the Johnny B. Goode scene. Why? Why not! It’s fun!