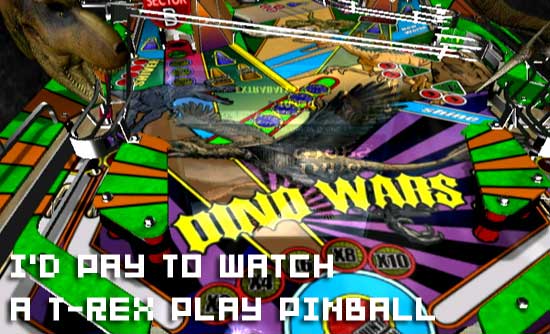 SouthPeak Games has announced that it will be publishing the Topware developed Dream Pinball 3D for the PC, Wii, and Nintendo DS.

Shockingly, Dream Pinball 3D is a pinball simulator, one that will “capitalize on the unique qualities of each platform.” That translates to using a mouse on the PC, using the touch screen on the Nintendo DS, and waving your arms around when playing the game on the Wii. The game will feature six table themes, each with its own ball options, visuals, and power-ups. I’m particularly fond of the “Monsters” table, which invites you to “explore the world of horror.”

Despite the fact that SouthPeak’s CEO Melanie Mroz says that “everyone loves pinball” (which I’d say is a valid statement), it’s hard to get too excited. I’m not going to jump to conclusions, but just so we’re clear, you should know that developer Topware made the unforgiveable sin, Chicken Shoot.

We’ll just leave it at that.

“Everyone loves pinball. It is an unusual kind of entertainment in that it bridges hardcore and casual gamers, while translating very well to videogames,” said Melanie Mroz, CEO of SouthPeak Games. “We are going to give the medium the respect it deserves.”

Dream Pinball 3D boasts six table themes, several different ball options, multi-ball power-ups and the most intense visuals and ball physics a pinball game has ever seen. The Wii™ version utilizes the Wii Remote™ and motion sensor capability to enhance gameplay. The Nintendo DS™ version includes intuitive touch screen control options and clear 3D graphics. The PC version offers pristine visuals and precise flipper controls with the mouse. With this many options to choose from, Dream Pinball 3D will bring out the pinball wizard in everyone!