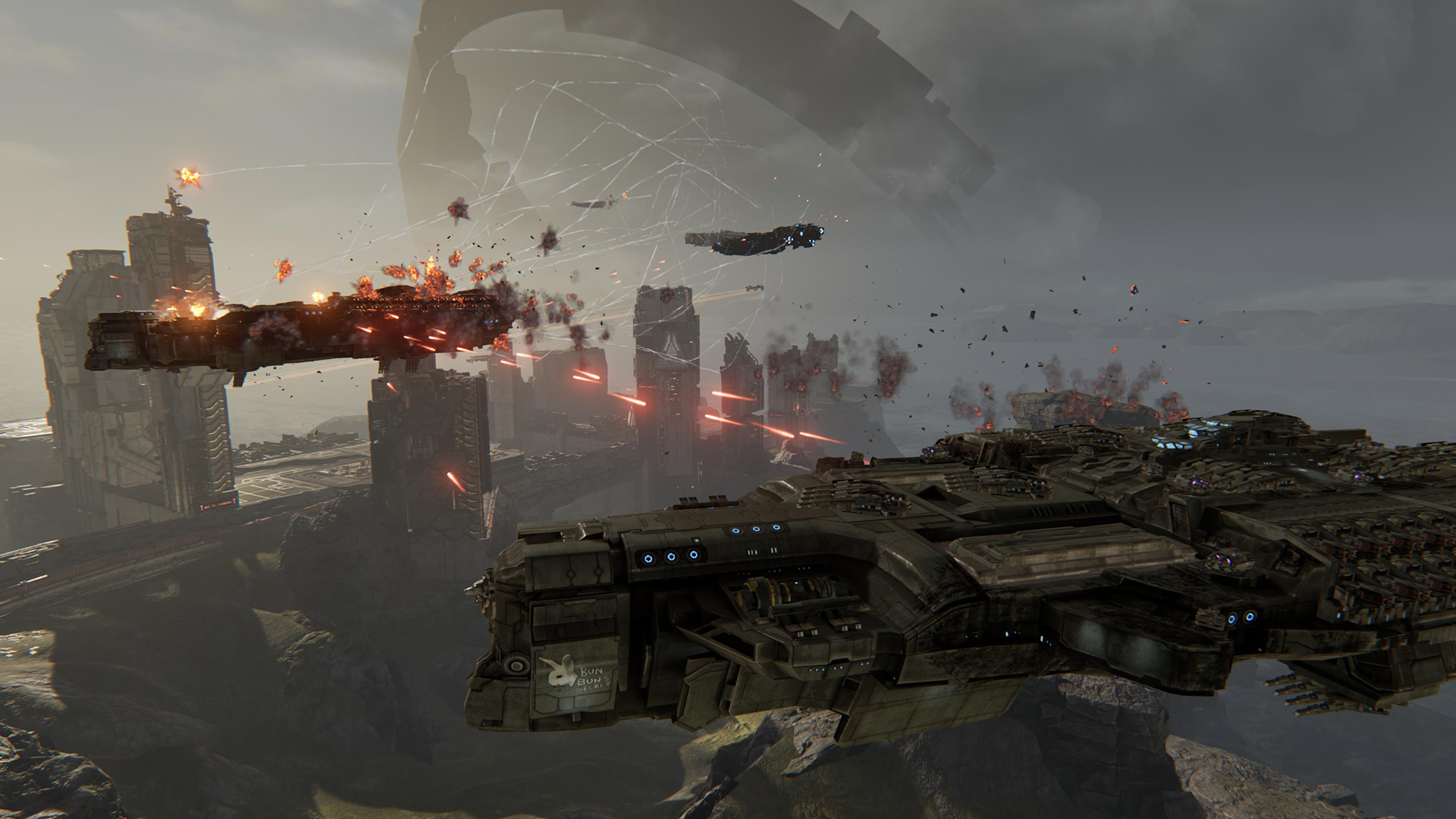 The last argument of space kings

It’s been a good couple of years for spaceship combat games. After a long dormancy, games like Elite Dangerous, Star Citizen, EVE: Valkyrie and the upcoming No Man’s Sky have put players back in the cockpit of all manner of dangerous, zippy star-fighters.

Dreadnought is also getting in on the space combat action, but from a decidedly different angle. Instead of sitting in the cockpit of a one-seat fighter, players take command of the massive capital ships usually reserved for villains and admirals. At the helm of a massive, slow, and fully-loaded ship reminiscent of the Battlestar Galactica, players slowly maneuver themselves around each other to try and best bring their armament to bear while diverting power to engines, shields, and all kinds of other sci-fi ship clichés. It’s a much slower, removed, and calculating kind of combat.

The weird thing is, I kind of love it. 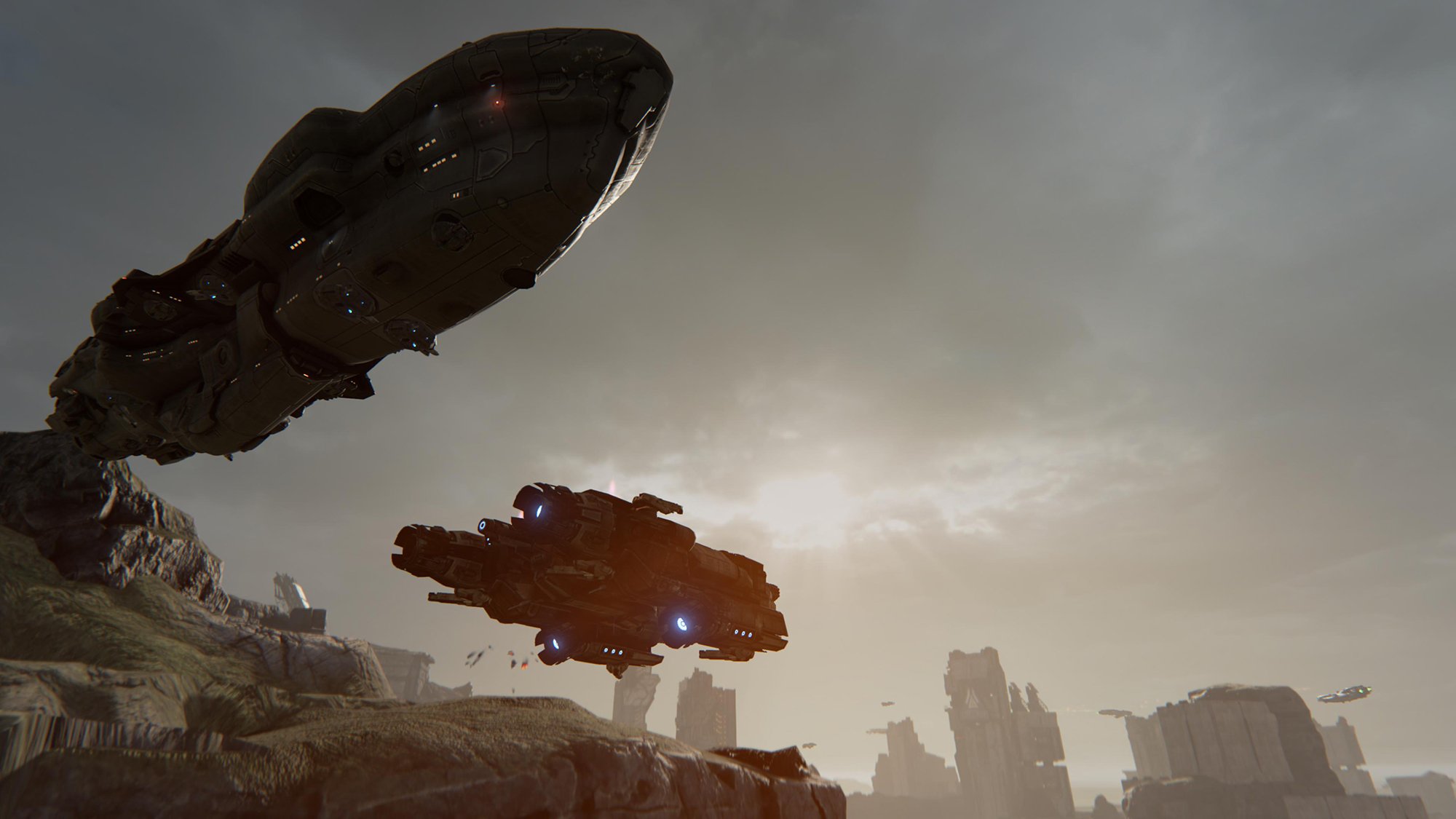 The ships of Dreadnought are all massive bruisers that take ages to move and steer and are designed to take a beating. With that in mind, positioning and resource management takes precedent over split-second reactions and #BigPlays. You need to keep an eye on your energy reserves, know when to drop your shields, and understand the range and purpose of every weapon in your arsenal. Each ship has two primary weapons, and a slew of secondary cannons, missiles, and support items to juggle. Everything from nukes to cloaking devices.

It gives the combat a cerebral, strategic element that is surprisingly engaging. You want to bring your biggest broadside guns to the party, but also minimize your exposure and incoming damage, while your opponents are trying for the exact same thing. So you dance around the (admittedly fairly dull) maps, ducking out from behind structures and diving into canyons to try and get the upper-hand before committing to an assault.

There are various weight classes and roles similar to other class-based shooters. The mighty dreadnoughts, slathered in weapons and armor, bring the biggest punch to a match, but are slow and often short-ranged. Artillery specialists strike from a distance with ridiculously oversized cannons that leave little room for armor, while destroyers fill a niche somewhere between the two ideas.

No matter what you pick though, you’ll always be at the command of a powerful-feeling vessel. Even the comparatively “nimble” class of corvette ships, billed as the assassin strikers of the game, feel weighty and substantial; more like B-52s hauling through the sky than attack jets. Don’t expect to pull any loops in a fighter (in fact, I was kind of tickled by the idea that a squad of fighters is actually a deployable munition option for some of the larger ships, just as disposable as a round of torpedoes). 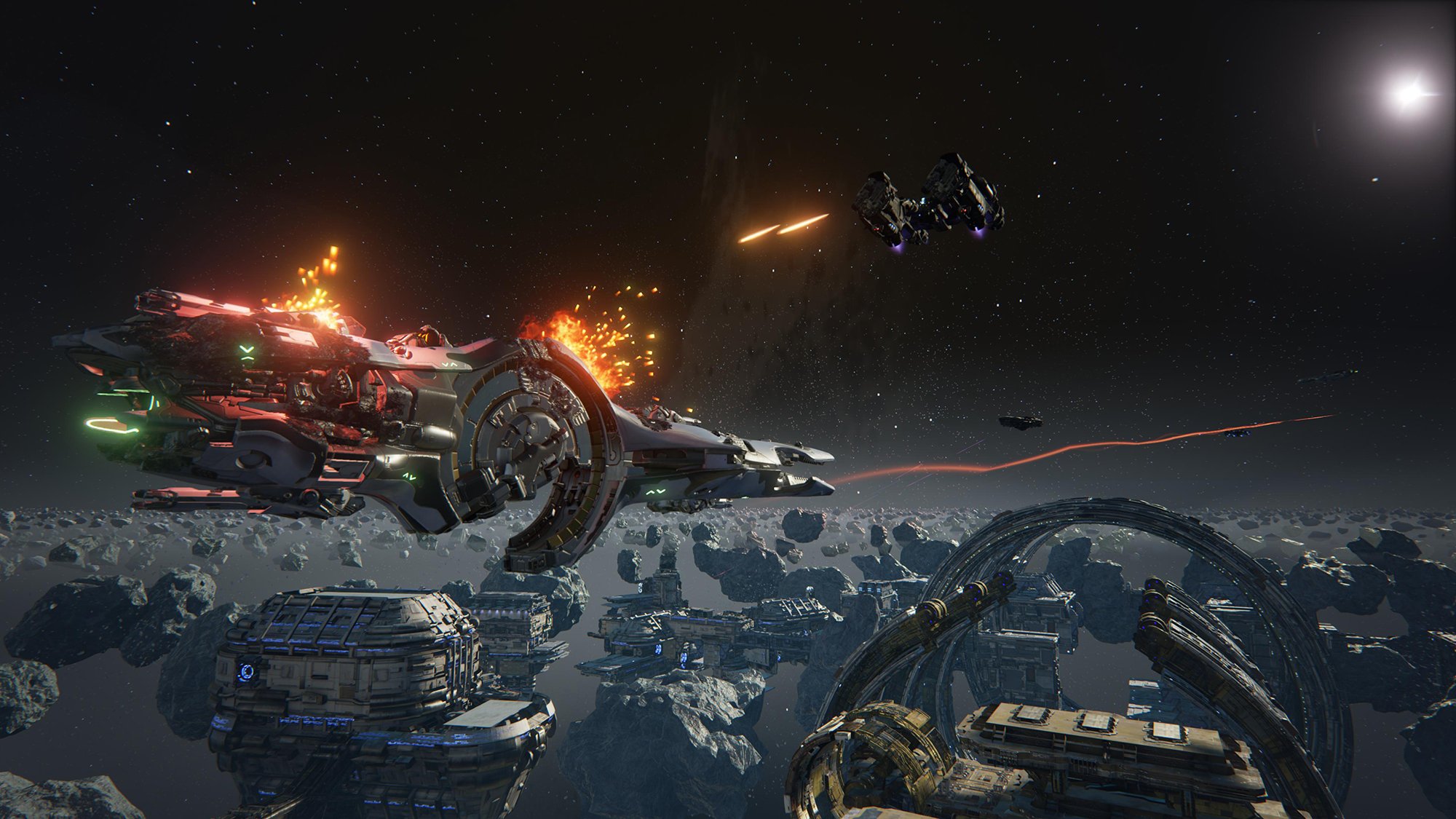 There are only two games modes right now. The standard team deathmatch pits two teams of five ships against each other in a race to reach the score limit first. Players can respawn and switch ships at will to adapt to the whatever the enemy team is doing. There is also the seemingly more competitively-oriented team elimination mode, where each pilot only has one life and one ship each, encouraging a much more cautious method of play. While I was a big fan of warping my heavy dreadnought into the middle of a pack of ships and letting loose in a Kamikaze blaze of glory in regular old deathmatch, that kind of stunt won’t fly in elimination.

Honestly, I spent most of my time in the kiddie pool of team deathmatch, but I’m extremely interested to see if players respond to elimination. With the right kind of group, a high-stakes game of wits played with giant laser-spewing battleships could be an amazing experience and I’d love to see what kind of strategies develop.

For everything I like about Dreadnought‘s gameplay, there are a few things holding it back. As a free-to-play game, it is subject to all the usual quasi-dubious design choices and hooks of the genre. There are two different kinds of in-game currency, one of which is earned (slowly) through match performance (you can of course buy a booster to speed things up), while the other can only be attained by pumping real dollars into the game. 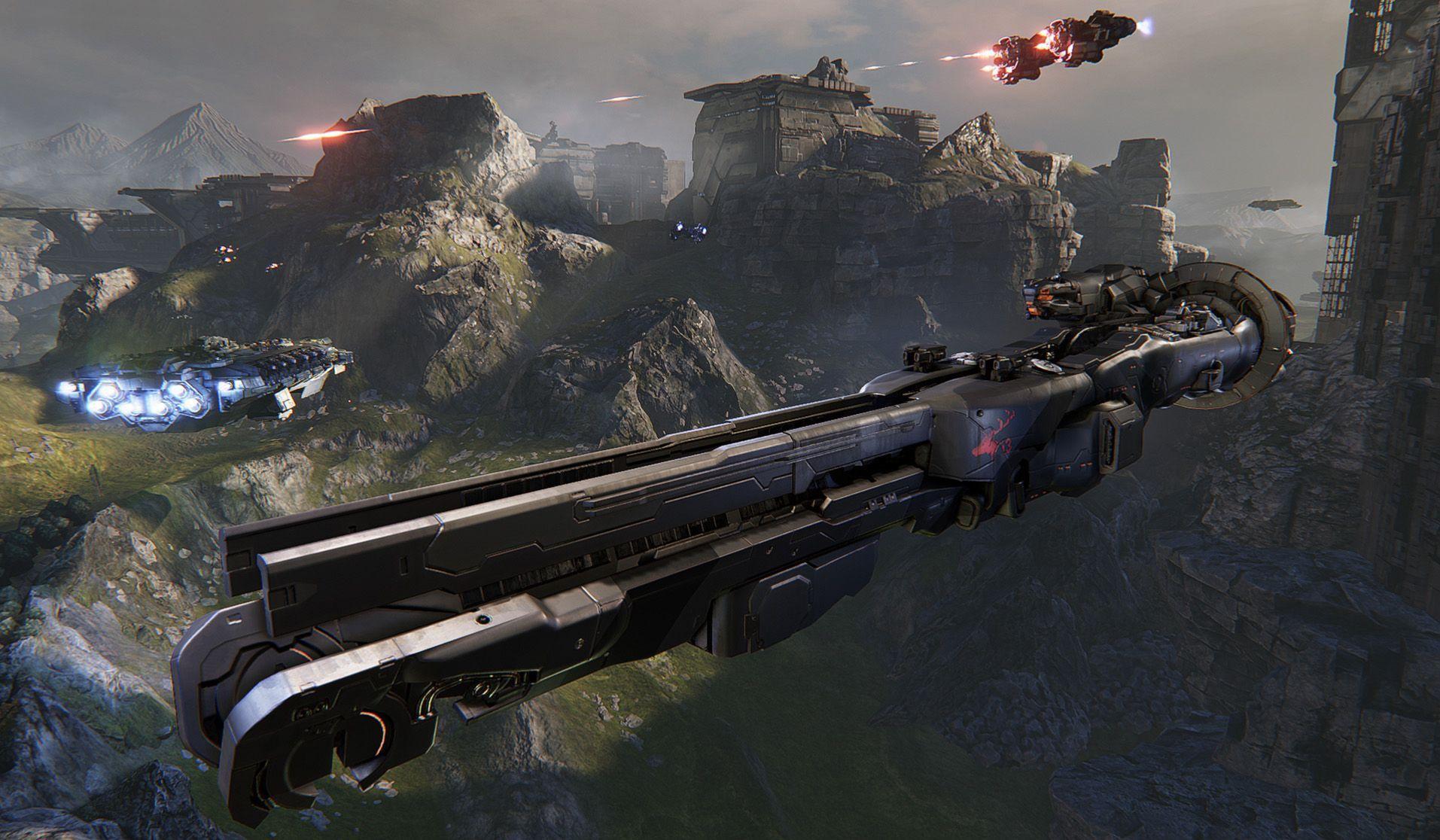 There is a progression system similar to what you’d find in similar free-to-play games like World of Warships, with higher ranks unlocking the privilege of buying new upgrades and weapons (two separate time sinks!). These new toys are supposedly roughly balanced with the earlier game gear so long-term players won’t dunk on newbies, but it’s tough to say if that will pan out when the game reaches wide release. I’m always a little leery of upgrade tier systems like this since they frequently stratify the playerbase between the haves and have nots, making it harder and harder for new players to join in over time.

If you want to play with some of the more advance gear early, you can always buy a Hero ship, a named and uniquely customized vessel that comes with a set loadout that can’t be changed — including a lot of higher-end options and gear. Again, this isn’t necessarily “paying for power” but Hero units will always feel slightly grimy to me no matter how ubiquitous they get in the free-to-play space. (On the plus side, the figurehead for the Morning Star Hero dreadnought is damn cool looking.)

A variety of customization options are available for both your pilot avatar and fleet. Ships can be decked out with new paint jobs, decals, and amazing figureheads to attach to the prow of your ship to impress your friends and intimidate your enemies. Some of these options are locked behind rank progression and can be bought with the currency earned from playing. But, you’ll have to plunk down actual dollars if you want a premium piece like a bitching metal shark head lined with razor-sharp teeth at the front of your ship (a decision I can only endorse with every fiber of my being).

Conversely, the options for pilots seem thin in the beta, with only a few different hats and drab color schemes to choose from. Call me back when there is an option to put a bitching shark face helmet on my captain. 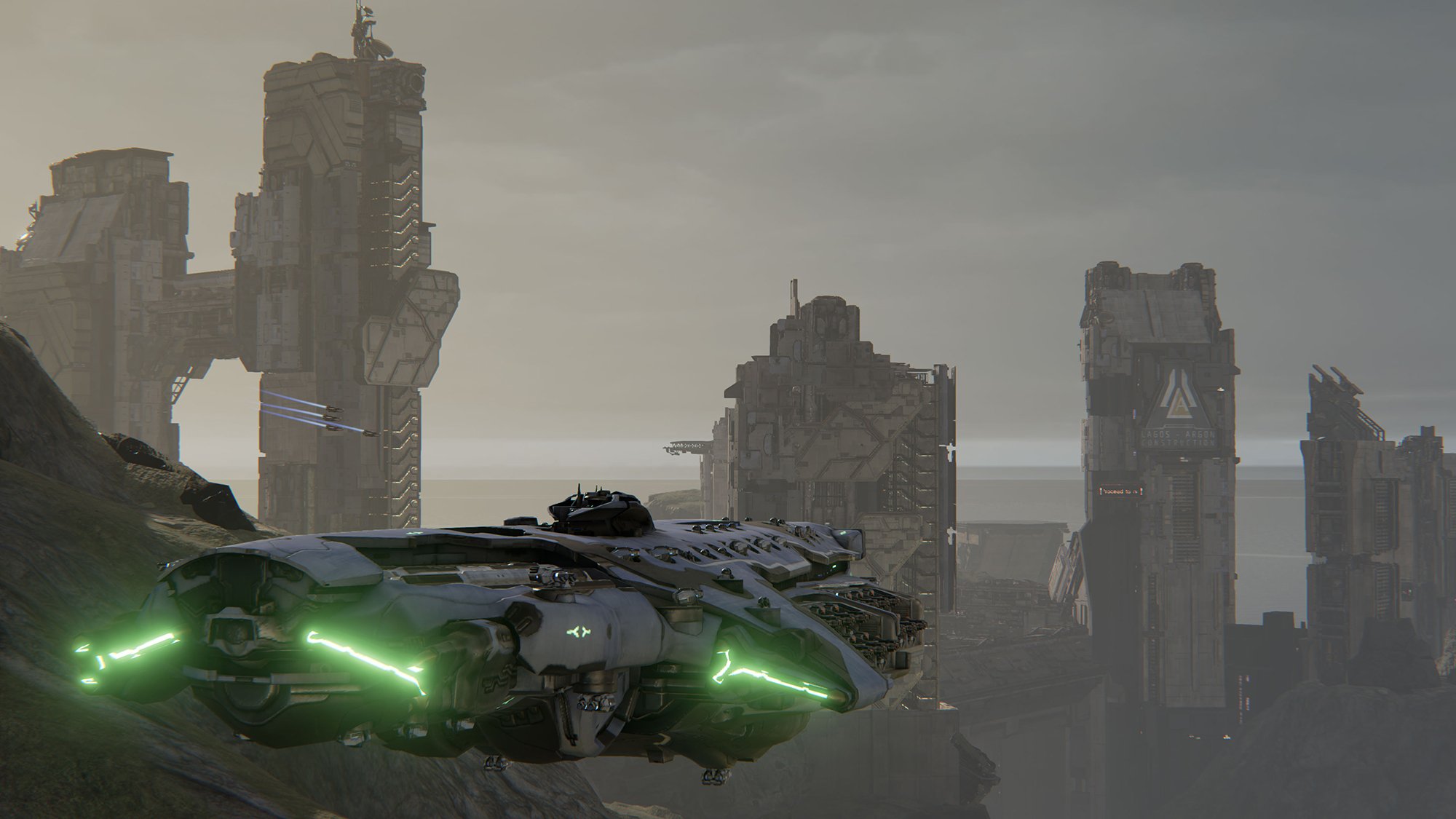 I was skeptical about Dreadnought’s appeal. I’m wary of free-to-play games at the best of times and I wasn’t exactly sold on the idea that steering around a bunch of gigantic lumbering ships would be fun. But, I found my time with the game surprisingly exhilarating. There is so much to do and keep track of with every ship that I never felt bored despite the snail’s pace of the movement.

I’ve already been Starbuck, the hot-shot pilot with all the fancy moves. Odd as it may be, it’s a nice change of pace to be admiral Adama instead; beleaguered, over-stressed, and all.