For as vibrant and beautiful, familiar and inviting as a classic Mario game is, failure abounds inside Nintendo’s crafted worlds, permeating our play. Its taints every bad jump, rushed attempt to snatch an item, or near miss of the white flag at the end of a level. Frustration sets in because there’s no way avoid failure other than to do better “the next time.”

But what if we could pause the game while plummeting, and then draw a bridge across the gap? Mario would be safe. Our game would continue.

That’s the exact option WiiWare-bound Max & the Magic Marker is giving us. 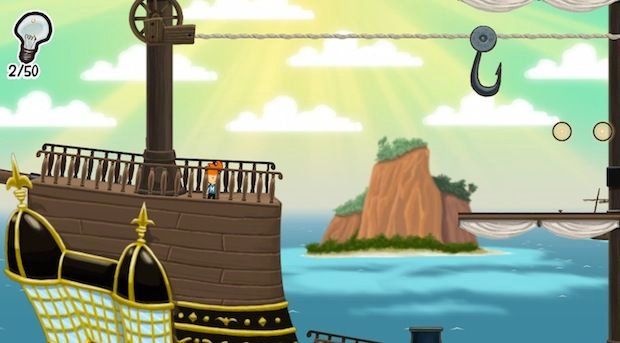 Developed by indie studio Press Play, the game is a colorful 2D platformer and easy to compare to a classic Mario thanks to its solid fundamentals. But what defines the game — its fat, big, and orange twist — separates it from the rest of the imitators.

Its star is Max. He’s a creative boy with explosive hair and a bright blue shirt. He’s more than an avatar: his bustling imagination is the catalyst for the game’s world.

“Max is a small boy, but also a symbol of the inner child inside us all,” game director Mikkel Thorsted told me via e-mail. “Max is the incarnation of the childish and unspoiled imagination.”

It’s easy to see why. The narrative ignites when Max presses a bulbous orange market to a blank sheet of paper. His fabrications are realized. Drawn into a world of this boy’s creation, I have traversed landscapes built by a child’s mind: exotic and bursting with color, yet grounded by the mundane artifacts of real life — red fire hydrants, brown shipping boxes and trees.

“The idea of (Max) was conceived along with the game concept. We were keen on creating a character that could fit our main vision for the game: to celebrate imagination and creativity,” Thorsted said. 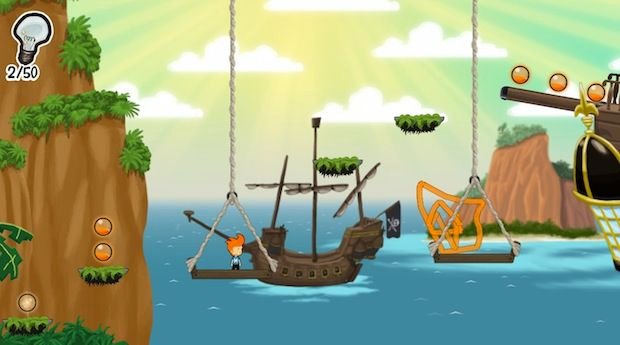 The art is special. It is as colorful and complex as it is vague and simple, not unlike a child’s sketches. The yellow house with the red door is flanked a blue dragon, in most of my ancient creations. Turns out Press Play did some work with children, having them draw in order to nail the game’s style.

“On a few occasions we had a class of second graders come to the office and sit around and make drawings for us based on very basic topics like ‘robots’ and “pirates,’ Thorsted said. “These sessions were fantastic for getting into the mind of the untamed imagination of children, and also served to help define the style. “

The first ten levels I’ve seen of the game are cleanly organized. Each one has several hazards to avoid — standard fare like the traditional gap or dangerous ledge. What grabs me in particular is the pacing of these levels and the fluidity with which Max can maneuver in the environments. 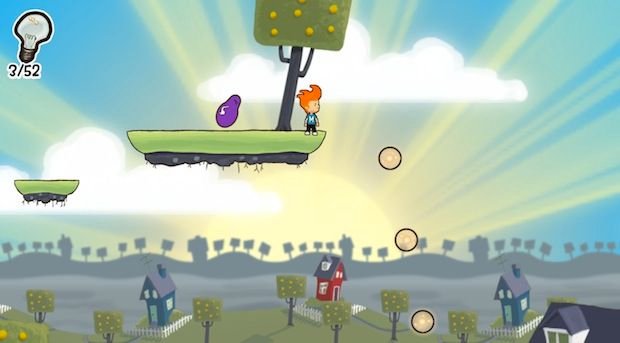 Max is fast, capable of zooming through levels in two-to-four minutes. He can also jump high and grip ledges with nimble fingers. He’s no Indiana Jones or Nathan Drake, but he operates well on his own. It’s a point of satisfaction, and, at the time I spoke with Thorsted, a pleasant surprise.

“Max is controlling his own super ego — it would be strange if he was incapable of hanging and jumping. (But) more than anything we wanted to avoid making a game that was too static.”

Competent as Max is, he isn’t able to conquer his imagination without aid from the thing that pulled him into the surreal: the magic marker — the game’s unique concept, as well as its defining element — that big, fat, and orange twist. 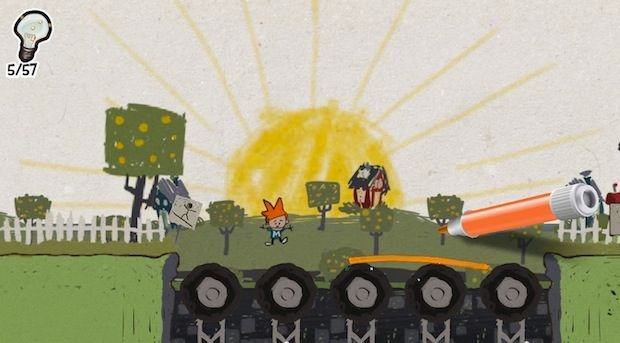 With the device Max can plug gaps with makeshift bridges, create staircases that span to unreachable heights, kill monsters, and solve puzzles.

“The magic marker is the one thing that makes Max & the Magic Marker a unique game,” Thorsted told me. “On one hand the marker gives the player a very good idea about the creative nature of the game. On the other hand, I suspect some people may think that the game is only about drawing, which is really not true at all.

“The game is still very much a platform game. Gameplay-wise the magic marker has turned out to be our tool to break the otherwise ‘deterministic’ nature of platformers and allow for open-ended gameplay. “

Using the marker is simple. It’s always on the screen, looming like a large cursor and ready to be used in two ways: (a) in real time or (b) while the game is paused.

The former is handy when you’re just looking to bridge a gap on the fly. The latter is more prolific, creative, as well as more useful. If you make a bad jump, you can just pause and scribble a platform to land on. 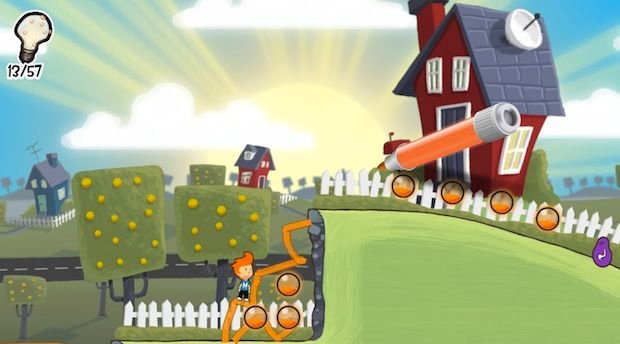 An interesting thing happens when the game is paused. Much like switching the visuals in Secret of Monkey Island: Special Edition, Max & the Magic Marker’s style changes dramatically: from art to a child’s scribbles. It’s a neat effect, but outside of being given more time to draw something useful, the change serves little purpose other than to remind us we’re in a little boy’s head.

“Inside (and) outside imagination is very important for the game universe as it is meant to replicate what you actually do when you draw; i.e when a child draws a robot and then looks at it is not a drawing of a stale robot anymore, it is alive and shooting out lasers and what have you”

You can draw anything you want with the marker, provided you have the ink to do so. But don’t think you can make a helicopter. The thick orange lines are made of lead that crash to the ground if not supported. The marker is more of a tool than a creative device. You can still make that helicopter or phallus-shaped cloud if you really want to, but it’s not going to get you anywhere.

“It has also been important for us that the game is not about drawing pretty things, but about creative puzzle-solving and fun platforming — it is not necessary at any point to draw something that looks like a house, a castle or a huge monster, but is both fun and possible.” 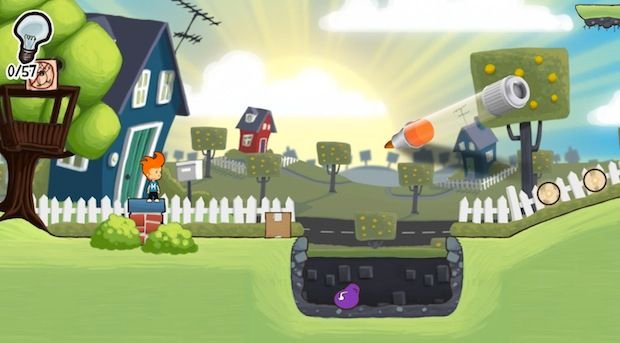 The physics add spice to the game’s puzzles, which aren’t varied but are spaced well enough to avoid fatigue.

Some puzzles require counter balancing, classic weight-oriented stuff. Others had me drawing makeshift skateboards to brave sections with moving gears, which react to shapes in intuitive ways. And there are a few more that test velocity, as well as torques.

There’s a lot to Max & the Magic Marker — my list of observations is lengthy:

I liked the checkpoint system. Most deaths set me back mere seconds instead of minutes, and the lack of a traditional life count keeps play pleasant. I also dug the collection system. Each level is packed with spheres to collect. The ink spheres are critical to the game — without ink there is no drawing — but the light bulbs and hidden question mark spheres appear to exist just for exploration outside of the basic end-goal objective.

I’m not sold on the controls yet, but there’s a good reason: I have been playing a PC press-only build of the game. This isn’t the ideal way to experience this, and my only idea was to ask Thorsted how the controls work on the console.

“Max is controlled with the Nunchuck while drawing is done with the Wii remote.” He added that, “A lot of time has been spent fine tuning the drawing feature.” 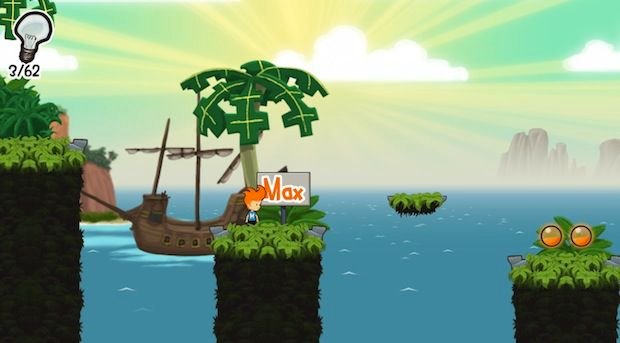 After solving, tweaking and fiddling in the game for over three hours, I’m left impressed by its warmth and solid mechanics. Thorsted, of course, wants people to like his game. He also wants them to explore.

“We want the players to experiment, have fun and of course to be creative!”

Max & the Magic Marker is slated to hit Wiiware within the next few months. There’s also a chance it will hit other unspecified platforms.