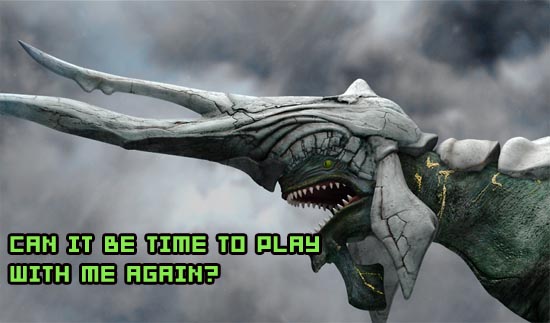 I’ve never seen Lair demoed anywhere. My parole officer doesn’t like me going out much, especially near childrens’ schools. I know that people scrutinize any new developments on the Lair front, though, to see if its somewhat dubious first showing has strengthened. –Hey, that gives me an idea. They should release Trauma Center: Dragon Edition for the Wii, and you can scrutinize dragons closely to look for weird bumps and skin rashes to see if they have horrible wasting scale diseases that require intense, motion-controlled dragon surgery. That’d be a good idea.

Anyway, these screenshots are sorta small, so you’ll need plenty of squinting and scrutinizing. What do you think?

The title image of this post is not a Lair screenshot. Fooled you, right?! It’s Panzer Dragoon, which is what Lair reminds me of. I played it back on Sega Saturn, until my dog chewed through the power cable, rendering the Saturn irreparable and useless.

At least, I always blamed my dog. Maybe it was angry dragons. Angry dragons who need surgery, stat!