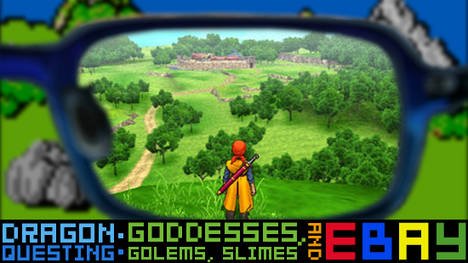 Back in September of 2008, I had the pleasure of playing my first proper Dragon Quest game with Chapters of the Chosen for the DS. I couldn’t help wonder why I had never played a game in this series before. I’m always complaining about the gimmicks thrown into many modern games and how I’d want nothing more than to just play a modern RPG that stripped away all the nonsense and took things back to basics.

Well, Dragon Quest has been sitting right under my nose since before I was born. Not content to stop at the fourth game in the series, I’ve set out to acquire and play through every localized Dragon Quest title right up until I replay the fourth entry … on the NES. I’ve spent months lurking around eBay, and I’ve amassed a complete collection that now only needs me to experience it.

If you’ve played any of the games I’ll be talking about, I’d appreciate your comments as I don’t know anyone locally who I can talk to about this wonderful series.

Last time I wrote, I had finally beaten the green dragon and returned the princess to Castle Tantegel. I knew that wasn’t the end, though, mainly because the spoiler buffer wore out on this game when I was still in diapers. My task now was, ultimately, to face the Dragonlord and retrieve the ball of light. I just had a few, tiny obstacles blocking my progress, but bookending each obstacle was about two or three hours of leveling up.

I think the grinding is my only real problem with this game. I’ve been spoiled by modern RPGs’ tendency to incorporate leveling up into the main quest, as well as most side quests. So because the dungeons in this title are frustratingly (although understandably) short, and that there are no real bosses, the majority of all experience points are earned on the field. Worse yet, not a single enemy on the world map will give you more than 45 points per kill, so, with 3,000+ points between each level, I’m sure you could imagine the monotony within this part of an otherwise fantastic game. The process boiled down to simply lining up enemies, defeating them, and collecting the points little-by-little. 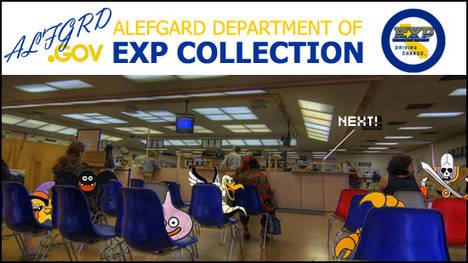 Basically, I was supposed to raise myself to level 17 before traveling to Hauksness in order to obtain Erdrick’s Armor. The mystical breastplate, aside from boosting my defense by 12, would also give me the ability to walk across swamps and other toxic areas without taking damage. The problem was that this treasure was being protected by an apparently very difficult Axe Knight, so I’d have to increase defenses before facing him. The first step towards this was collecting enough money while heading towards the southern-most part of the map to a town called Cantlin. Once there, I could obtain the most powerful equipment in the game (that one could purchase).

Making my way through the stone walls of Cantlin, I purchased the Flame Sword ($7,800) and the Silver Shield ($13,400) while still at level 15. Having had bought the most expensive, powerful, purchasable equipment in the entire game, I had rendered money completely useless. So, now I was grinding only to grind; it was now only a matter of increasing experience points. And although I didn’t die during any of my grinding sessions, I wouldn’t have cared if I had, seeing as money served no purpose anymore (nor would it at any point for the rest of the game).

I spent about four hours spread over just as many days getting my character to level 17. It was … kinda boring, although the final few hundred points leading up had me really anxious. In fact, I was so antsy that I just couldn’t wait anymore for the armor. I technically needed this armor to get Erdrick’s Token — the item I needed so that that stingy old man from the south would give me my goddamn rainbow drop — because it was hidden somewhere in a poisonous swamp. But, as bored as I was just walking around in circles, I decided to break sequence and just get the token early.

And that’s exactly what I did; I put on my man face, trudged through the swamp, picked up the token, healed, and hightailed it outta there. Bam. I had it. And, better yet, a few battles before and after the fact pushed me over the edge to level 17. Finally. Now, I could at last go to Hauksness and get that damn armor.

Setting foot in Hauksness made for a sad sight. The story here is that the town had been ravaged by the evil Dragonlord’s minions. Perhaps it was in an effort to find Erdrick’s Armor? Well, no matter, they didn’t get it. But, I had the Explorer’s Handbook, so I knew right where it was. As expected, going to the spot where the armor was buried initiated a battle with the dreaded Axe Armor … wait, what’s this? This guy’s not so tough! I killed him in three hits! I have to wonder if I could’ve just defeated him at level 15. Anyway, after I dispatched the miniboss, I equipped my prize and walked out of Hauksness.

Ok, so then all I had to do was get the Rainbow Drop, go to Castle Charlock, and defeat the Dragonlord! Easy enough, right? Well, apparently not, because after I used the Rainbow Drop to make the bridge appear (which initiated a pretty neat little cut scene), I was told that I had to get to level 20. TWENTY?! That’s three more levels! And that means more grinding!! 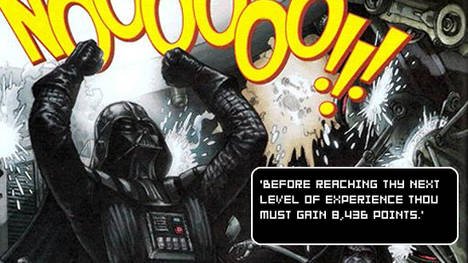 I couldn’t believe it. I had only one final mission left in the entire game and all that separated me from victory was my experience points. I was seriously in denial here. Refusing to accept my fate, I decided I had to make a run for it. I had to at least sneak in there and get Erdrick’s Sword (comes with a massive attack boost) so I could one-hit-kill some enemies. 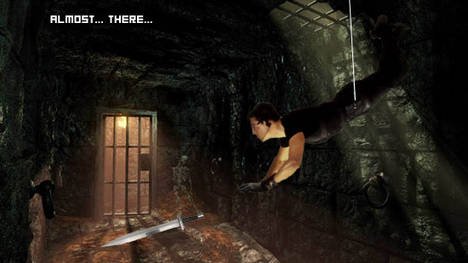 And that’s exactly what I did. I ran from every fight, consulted the handbook for all the right directions, and fast-passed my way to Erdrick’s Sword; the most powerful weapon in the game! Somewhat low on health at that point, I used an exit spell to get myself out of the castle dungeon, and flew back home to rest and save.

I knew then what I had to do. I couldn’t even make it to the last boss without getting badly damaged. I accepted that I, indeed, did have to level up to 20.

So… I’ll spare you most of the details here, but, long story short, I really did level up to 20. It was long, it was boring, and it was exhausting, but after walking around in circles for about three hours (I watched Collateral with Jamie Foxx and Tom Cruise to pass the time. It was a fantastic movie), I finally had the strength to go and face the Dragonlord. I know that if anyone out there plays WoW, they probably think I’m kind of a wuss for complaining about three hours, but hey, I was proud. It was like I graduated from grinding school or something. 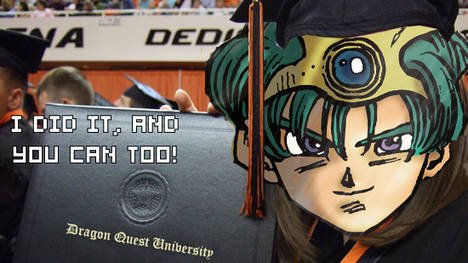 Alright, back on track. I was finally ready to face the Dragonlord. I left Castle Tantegel, made my way to Charlock, and walked right in. I ran from every battle I could, and once again consulted the handbook at every turn (It’s not cheating; it came with the game!) to make sure I didn’t take any unnecessary steps. Deeper and deeper I went, until I finally made it to his throne room. For those of you who’ve never played this game, the dungeon theme drops in pitch by an octave every time you go down another floor and farther into the keep; so by the time I made it to the Dragonlord, the theme was practically being played on the E string of a bass guitar. Finally, standing right in front of him, he spoke.

He said that if I joined him, I’d share in his spoils and we’d rule the world together. The game then prompted a choice: Yes or no. Did I pick “yes?” Ha, not bloody likely! I picked “no,” I fought him, and I kicked his ass, Rambo style! Seriously, he went down in, like, three hits. But to my surprise, he didn’t stay down. The room went dark, the music transitioned into a different, moodier song, and he turned into a huge dragon. I’d been punked! 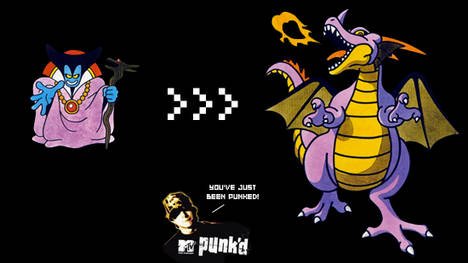 He was much harder now. He’d hit me for 30-50 damage each turn, and I’d only hit him for 7-15. I had to use HEALMORE every third turn! I thought for a moment that I wasn’t going to make it, as my MP was almost gone and I wouldn’t be able to heal any more, but he did fall eventually. And I won! I received the ball of light, was transported outside, and was told to return to Tantegel. Basking in the moment, I opted to walk all the way back instead of teleporting home. All the monsters were gone now, so I didn’t have any battles. I just took my time and walked back to the castle. When I got there, the guards were standing in two straight lines, leading me up the walkway where the king stood.

When I spoke to him, he was ready to hand me his crown and step down as king. Then for the first time ever, my character actually spoke and said “I cannot. If ever I am to rule a country, it must be a land that I myself find.” And with that, Princess Gwaelin walked down the stairs and asked if she could join me. Of course, I said yes, and I once again took her into my arms and walked away as the screen faded out to display the following: 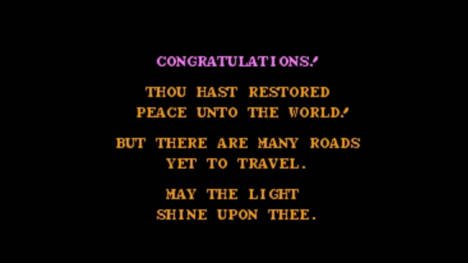 Whew, done! I was really put off by the games difficulty at first, and the grinding was certainly a chore all the way through, but I’m really glad I stuck with it because it was altogether fantastic.

So now the question is “What next?” Well, my original plan was to play Dragon Quest VII, but I’ve been told that that game could easily stretch out to over 100 hours in length. And with V coming out on February 17th, I just don’t know if I could finish it in time to pick up the new title (I don’t think I could keep myself from tearing into the new game when it comes out). Instead, I’m going to break away from the numbered games and play a spin-off! I’m stuck between two options right now: Dragon Quest Monsters: Joker; and Dragon Quest Swords. Which one do you think should I play?

As always, thanks for reading!

For the past Dragon Questing blogs, click the links below:

Getting a Grip on a Classic: Dragon Questing, Part Six

The conclusion of an Epic: Dragon Questing, Part Four

How to Give a Boy a Heart: Dragon Questing, Part Two