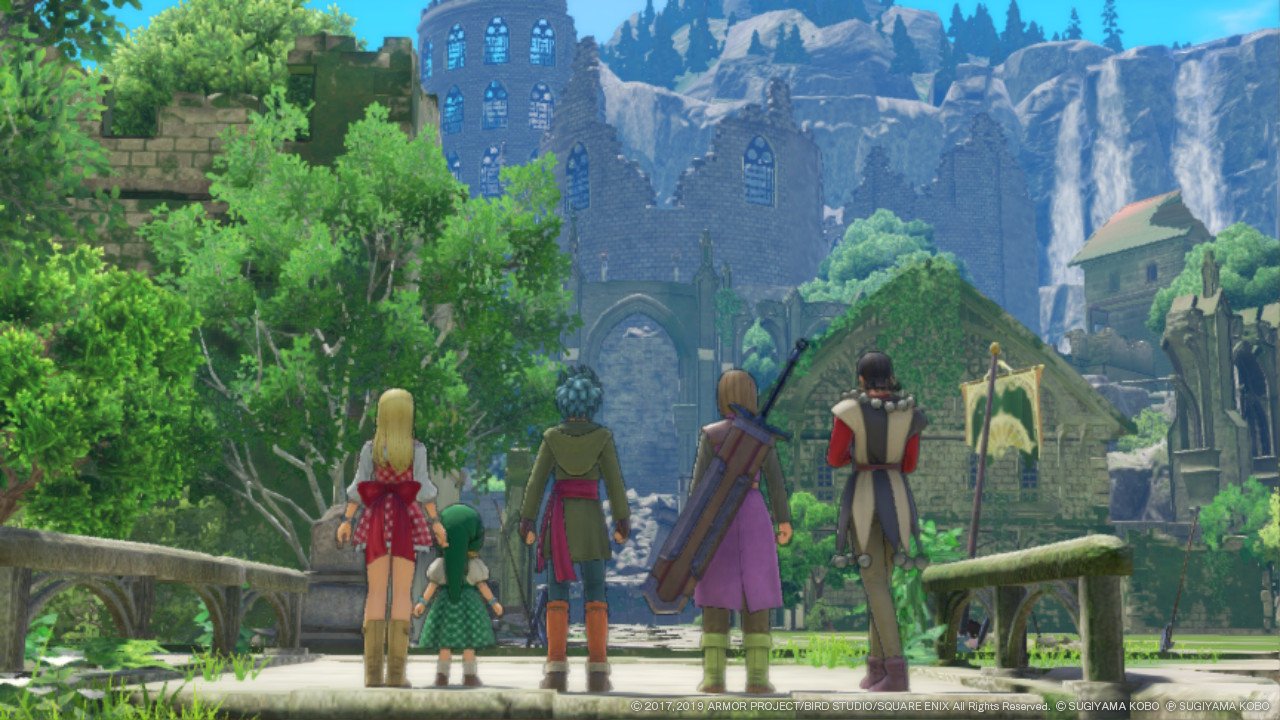 Dragon Quest XI: Echoes of an Elusive Age (DQXI) was one of my favorite titles from last year, a gorgeous throwback to earlier games in the long-running RPG franchise. That said, the version we got here in the West was somewhat compromised compared to what Japanese players enjoyed. The Definitive Edition aims to change all that, bringing over almost all of the content which was cut prior to the international release.

If you want to know about the base game, I’m happy to report it’s unchanged and the only changes made were additive. You can read the official Destructoid review here, and you can also read what I thought about the PS4 version here. To be brief, it’s an absolutely beautiful game that starts slowly and relies on tradition and nostalgia for the bulk of its appeal.

So what does the Definitive Edition offer, apart from the flexibility that comes from releasing on the Switch? 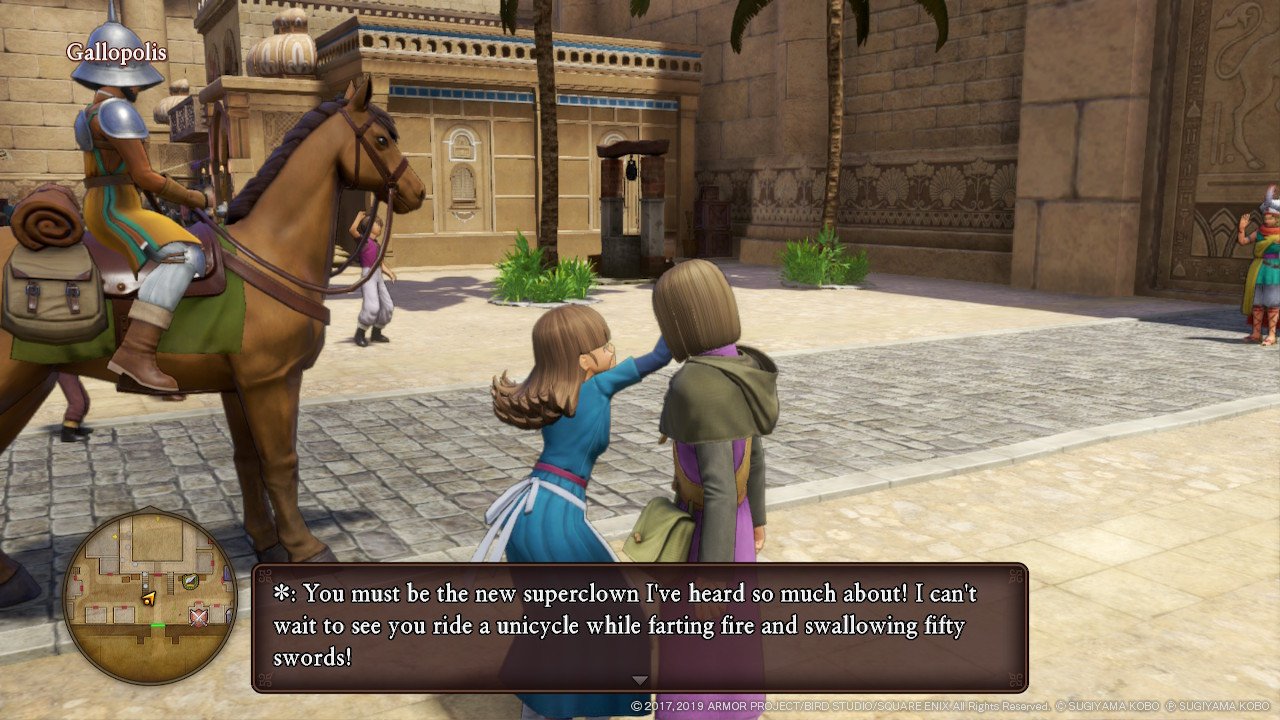 For starters, let’s not dismiss that flexibility so quickly. Most Dragon Quest games have been associated with portable hardware for over a decade now, and it’s lovely being able to take the most recent version on the go. I’ve always thought RPGs work best when you can pick them up and play without focusing your full attention on them, and DQXI works wonderfully as a handheld game.

Of course, that’s no surprise to anyone who knows the history behind DQXI. In its home country, two separate versions of Dragon Quest XI were released, for the PS4 and the 3DS. The new-to-us 2D mode included in the Definitive Edition is what 3DS players in Japan would see on their bottom screen, while a low-poly version of the PS4 game played out on the top screen. Japanese players who purchased both versions could use passwords to carry their progress over from one version to the other, though this wasn’t a perfect one-to-one transfer.

The Definitive Edition eschews the low-poly mode included in the 3DS version. Instead, players are allowed to choose between the fully-rendered 3D game or the 2D version, inspired by late SNES titles such as Final Fantasy VI and Chrono Trigger. If you’re expecting to switch between the two versions on the fly, you may be disappointed. It’s not like Wonder Boy: The Dragon’s Trap or the Monkey Island special edition where you can swap between the two graphical styles with the press of a button. You can choose to switch art styles at any save point, but swapping between them will force you to return to the last major plot point you’ve completed.

This is a little awkward, but not as bad as it was for players who switched between versions during the initial Japanese release. For those swapping between the PS4 and 3DS in Japan, passwords generated by one version only ported over your story progress, and gave an approximate value for your gold earned and equipment found. The new Switch version does away with this approximation, so anything you find in the 3D version will carry over perfectly when you swap to 2D, and vice versa.

The Switch port does a nice job of approaching the high-end 3D graphics of the PS4 and PC versions, and it looks good whether you’re playing in docked mode or portably. It doesn’t look quite as nice as the HD versions (though it’s close), but I noticed there were fewer, briefer loading screens on the Switch. It did crash on me a couple of times after a long play session, but these issues went away after fully powering down the Switch, and the autosave meant I didn’t lose too much progress. For those concerned about performance, you can try out the 10-hour demo to see if you can live with the minor compromises. Unfortunately, the demo only allows play in 3D, so it’s hard to get a sense of the game’s 2D mode except through videos.

There are a few quirks I noticed whenever I swapped between graphical styles. Tutorials reset every time you swap visuals, and so do treasure chests. This made it much easier to collect the usually-rare Mini Medals, and also made it possible to find multiple copies of some gear which was supposed to be much harder to come by. I also found that recipes were sometimes easier to spot in one mode than the other.

If you choose to return to an earlier chapter of the story when swapping between visual modes, you’ll lose all the story progress you’d made past that point. I recommend creating two save files, one for 3D and one for 2D, and only swapping between them after major plot points to avoid losing progress. 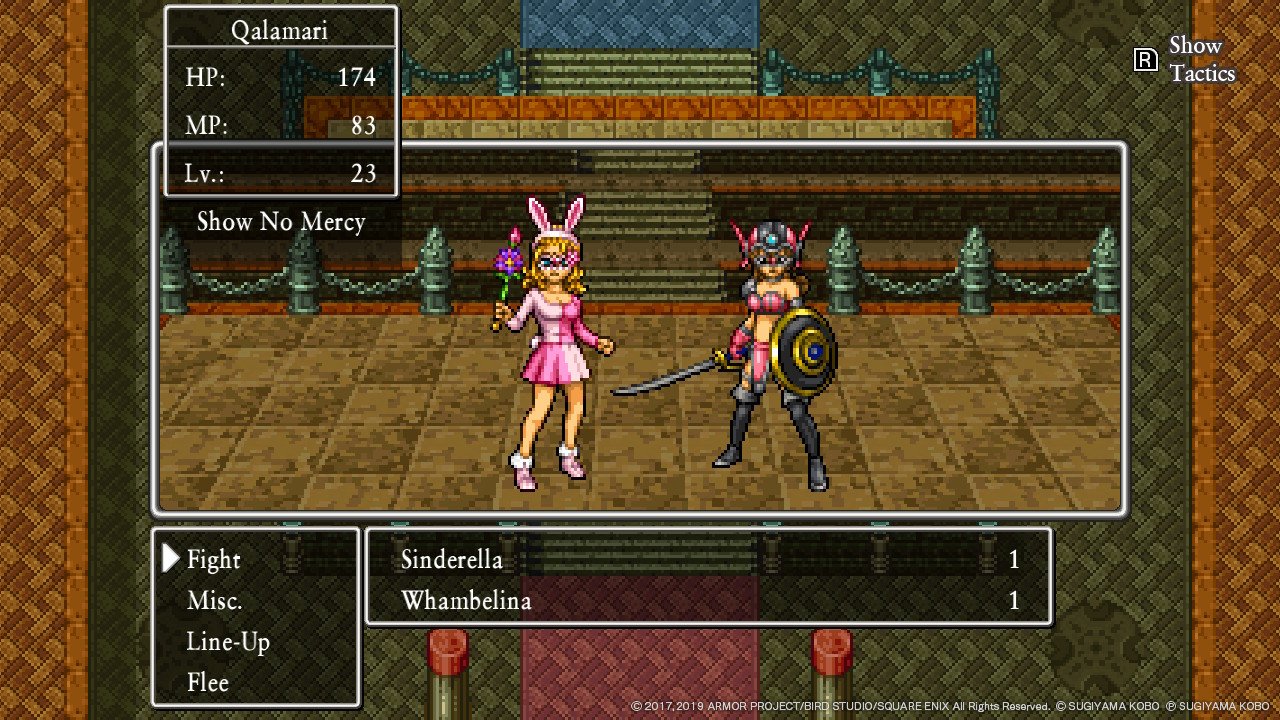 The biggest difference between the two versions has to do with the combat mechanics. The 3D version has an enormous open world, and monsters can be seen on the world map and avoided if desired. By contrast, battles play out much more quickly in 2D, but combat can’t be avoided in this mode since it’s all comprised of random encounters.

It helps to think of the two graphical styles as two separate games, though they do share the same plot, characters, and similar mechanics. Each version has some quirks which may make it easier or harder to perform certain actions. As an example, I found that I prefer the 3D version when playing the crafting minigame, but the 2D version is better for grinding cash and XP. Some content is only available in one version, and the game will automatically switch its visuals if it isn’t programmed in the style you’re currently playing (e.g. horse racing is only available in 3D). 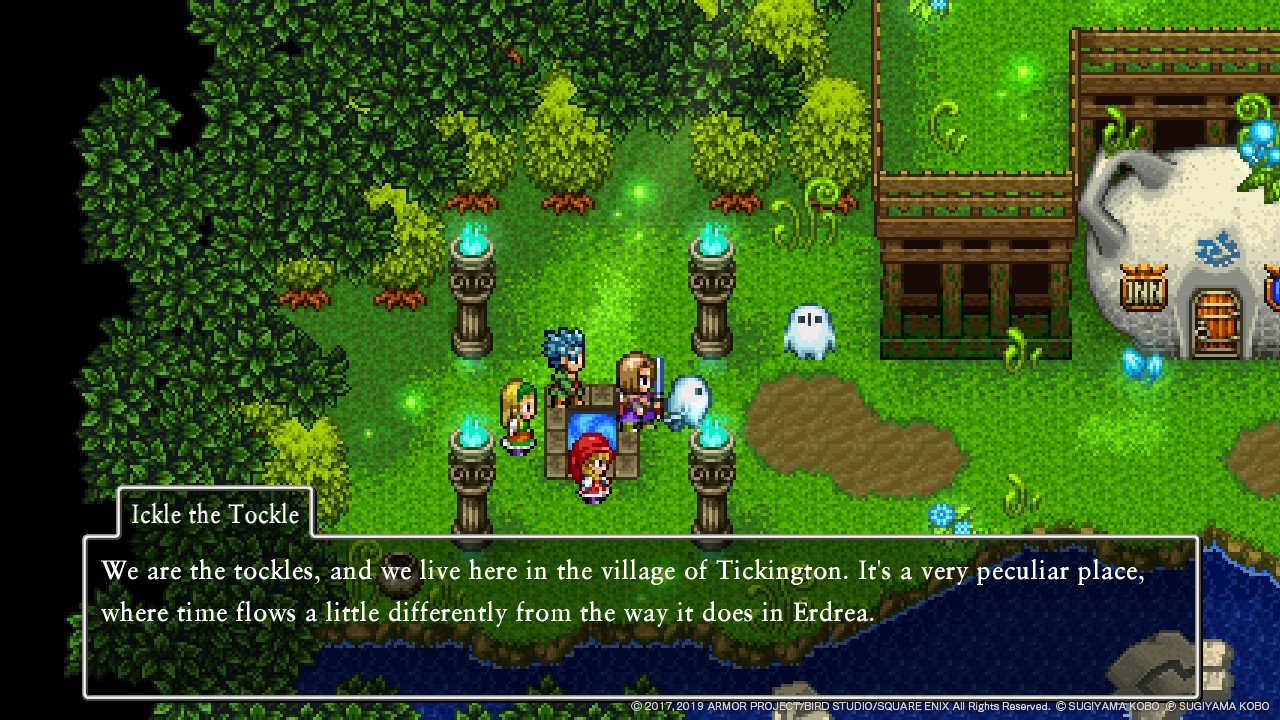 Apart from the retro graphics, the 3DS version’s bonus content was also carried over for the Definitive Version. This is essentially a series of vignettes inspired by the previous 10 games in the Dragon Quest series, allowing the hero to briefly visit his ancestors and try to solve some of their problems. Before doing this you have to hunt down special “yocchi”, the noodle-armed ghosts who provide access to the past. Completing these optional side stories can earn special items, such as a golden pickaxe which lets you collect one extra item every time you harvest a mining outcrop. None of this is necessary to advance the plot, but it’s fun for completionists, or those who want to take a break from the main storyline for a few minutes. I especially appreciated the opportunity to experience these sections because there was never any guarantee they’d be made available outside of Japan.

The other major changes to the Definitive Edition have to do with the audio. Although I’d still like to invite the game’s composer to perform an anatomically impossible act, this edition does have the full orchestrated soundtrack originally left out of the international version. It’s much better than the synthesized soundtrack, though you can switch back to the synth – if for some reason you’re missing part of your brain. It’s also possible to listen to Dragon Quest VIII‘s symphonic soundtrack outside of battle, something which wasn’t even included in the recent 3DS rerelease. What’s more, the Japanese voice tracks were included for the 3D mode, and you can mix and match all these audio options to your heart’s content.

Many quality-of-life features were added to the new version. If you don’t have some of the items you need for crafting, you can simply buy them for gold without having to track them down in a shop or on the world map. A new photo mode was added, making it much easier to take the perfect Slime selfie. You can change your characters’ appearance without having to wear substandard gear thanks to the new Outfit option. There are a few more features included in the Definitive Edition, but going into detail would involve some spoilers. Without getting too specific, there are some additional story beats in the post-game, as well as a brand new recruitable character and extra explanation of some characters’ backstories. 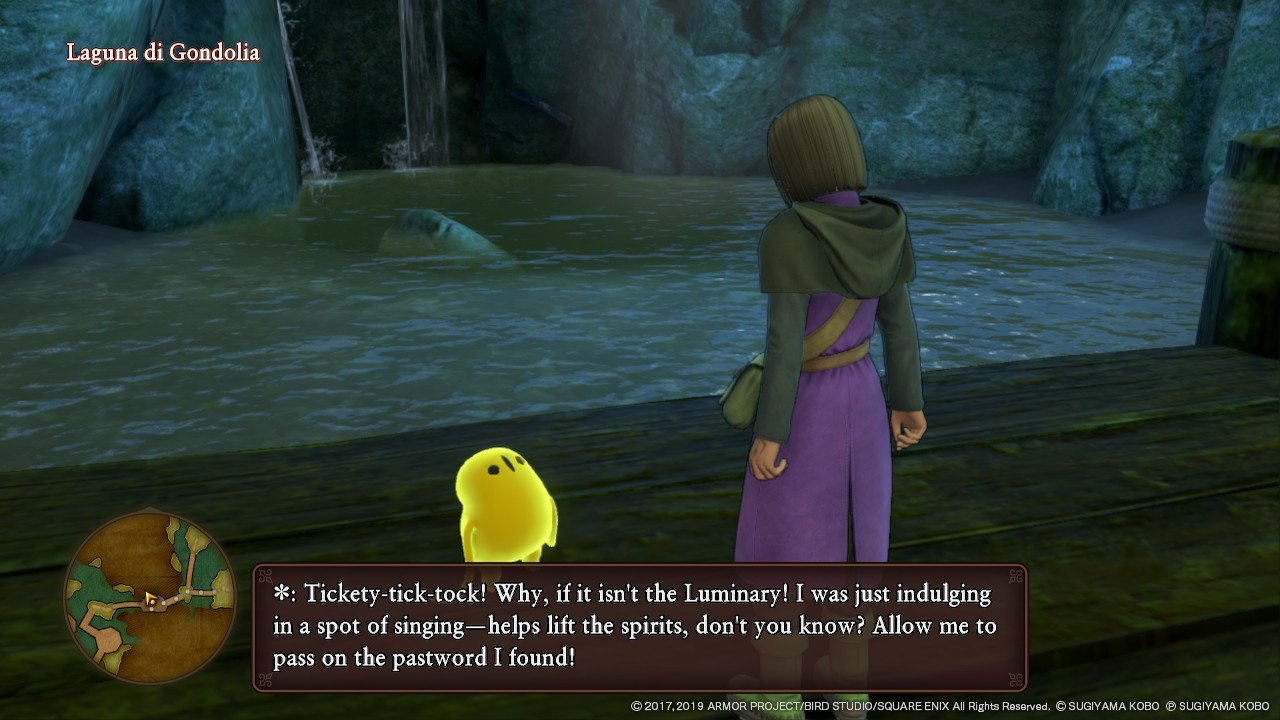 Is it worth double dipping if you’ve already played through Dragon Quest XI? Well, that’s going to depend on how much the new features are worth to you. For me, the orchestrated soundtrack and 2D mode made it feel like I was playing a brand new game, but your mileage may vary. If you haven’t yet played one of the other versions of DQXI, the Switch update is superior in almost every way.

Dragon Quest XI was an excellent game last year, and the new Definitive Edition makes it even better. In my opinion, its developers succeeded admirably in their goal to make a game that can stand aside classics like Dragon Quest VIII. If you’re looking for a beautiful, traditional JRPG (or even if you just want to learn more about this Hero character from Smash Bros.) Dragon Quest XI S: Echoes of an Elusive Age – Definitive Edition is well worth your time.