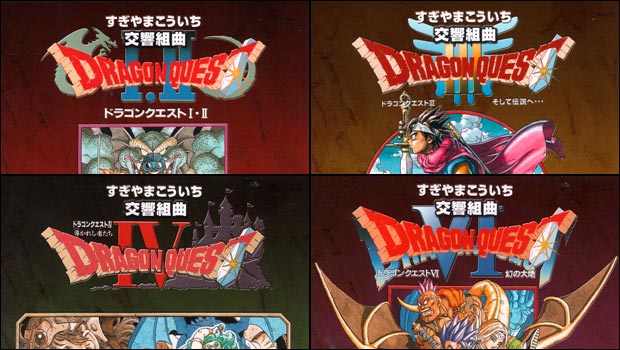 Dragon Quest series composer Koichi Sugiyama has always been somewhat of an anomaly in the videogame industry.  A famed composer in Japan even before his scoring the original Dragon Quest back in 1986, Sugiyama is known not only for the heavy classical influences throughout his work (every Dragon Quest game to date has received a separate live orchestral CD release), but also for leaking details about upcoming Dragon Quest titles, including the release windows for recent installments of the series.

Another interesting note is that Sugiyama owns the rights to all of his music, and as such, he releases Dragon Quest music whenever he pleases, resulting in some rather unnecessary products like this one.  King Records announced today the 10-CD Symphonic Suite Dragon Quest Scene-Separated I-IX CD-BOX to celebrate the series’s 25th anniversary.  A confusing title, yes, but what it essentially does is compile all the music from the series by song type, with a CD for castle themes, a CD for battle themes, and a CD for overworld themes, etc.  As much as I like the idea of separating out music by theme, what makes it unnecessary is the fact that Dragon Quest X will supposedly be out next year, making this 15,750 Yen ($204) box obsolete.

Do you think this box set will appeal to even obsessive Dragon Quest fans in Japan and abroad, and are you with me in thinking that the huge number of soundtrack box sets we’ve been seeing recently are kind of a gimmick?