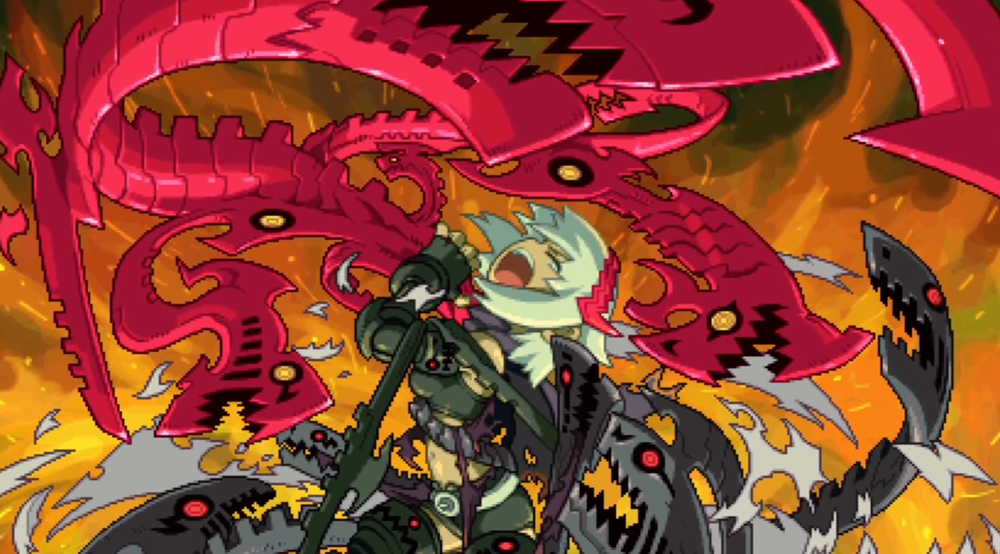 I call dibs on the Empress

Inti Creates is one of the more reliable supporters of Nintendo hardware. Its games are a shining beacon of quality on the 3DS and its Switch output is quickly matching that same level of excellence. The developer jumped on board quite quickly with Blaster Master Zero and has kept pace with the meteoric rise of the platform, churning out a handful of niche titles over the past year and a half. Inti Creates’ games have been quite good, but its best title yet may just be a few months away.

Dragon Marked for Death is sort of a dream project for somebody like me who’s been a fan of the developer since its early days. The title reunites members of the Mega Man Zero team, and based on the PAX West demo, they’re creating a title easily on par with everything the developer has created to this point. The game will feature up to four player co-op, both locally and online, and each of the four included characters will control, attack, and progress in their own unique way.

For the PAX demo, there are just two characters available: Empress and Warrior. My first attempt at the game is solo as the Empress. She’s a perfect starting character for those unfamiliar to side-scrolling action RPGs as she’s the most balanced of the group. Her sword takes down foes close up while her Dragon Shot can blast them from a distance. Each character in Death is imbued with the power of a dragon, giving them special abilities. In addition to the Dragon Shot, the Empress can attack with a Dragon Sword downward slash or absolutely tear opponents to pieces with the risky but powerful Charge Shot. Each dragon attack carries with it a certain level of pixel pizazz and seeing her Charge Shot come together is cause for celebration of the wonderfully intricate art direction.

The mission I accept with her is a simple “kill the boss” quest with a surprisingly difficult final encounter. At least it’s difficult for a trade show demo. Most of the games I play are turned firmly to easy. The level I traverse with her is colorful, but a bit basic throughout. It doesn’t really do much to make the art direction memorable, at least not as much as design of the characters does. The levels do offer multiple paths though based on which character I’m playing as. The Princess has Dragon Hook she can use to swing in certain places, something the Warrior does not.

The morning I’m meant to write this preview I awake with a horrible headache, leaving my brain too scrambled to write anything significant. I return on the final day of PAX, hours before my flight out of Seattle, to give it another go. This time, I’m playing co-op as the Warrior. Most of the knowledge I have from my previous session has to go right out the door, as his attacks are quite different from those of the Empress.

The Warrior is more defense-focused, so all of his dragon powers funnel into group protection. He has a basic Dragon Shield to block attacks and a charged Berserk move that powers up his defense and offense. The Warrior’s battle ax can also be charged up for massive damage and he can tackle enemies. What he can’t do is swing, and in this mission where my partner and I must locate a missing boy, I have to find my own way to the target. With co-op on separate Switch consoles, we don’t have to worry about wandering too far off from our partner. In fact, it’s encouraged. The levels I play aren’t exactly labyrinthine, but the available paths do provide enough separation that I prefer having all my action on my own screen rather than the whole picture cutting in half once we split up.

A section of the level right before we find the boy is a great showcase of how progression can differ between the characters. A chasm of fire separates us from our goal with spiked pillars lining the ceiling above us. The Empress can easily swing from these spikes to the other side, but I have to take each one at a time, knocking them down and using them as platforms. Other levels will feature walls that can only be broken by characters and other similar designs meant to encourage exploration with different characters.

Dragon Marked for Death is set to hit Switch on December 13. That should give you loads of time to beat Smash Bros. Ultimate before it launches. This PAX demo only solidifies for me the excellent work Inti Creates is capable of, but I’ll hold my judgment of the final game until after I see how everything holds up when three other players and myself are tackling the promised screen-filling boss battles online.