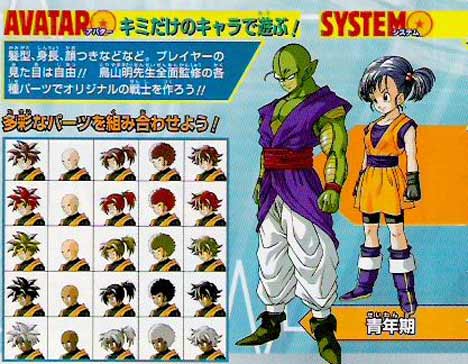 DMV. DBZ. MMO. Capeesh? Ok, I’ll slow things down a little. Over on Japanator, DMV found out that there’s an MMO DBZ game in development for a 2008 release in Japan, and a beta testing session in Korea this summer:

The game is set 200 years from the end of the manga, so all the main characters are dead, or so it seems. The world has been divided by some evil organization, and with the help of “Time Patrol Trunks,” you’ll help to reunite the world.

In Dragon Ball Online you get to play as Saiyans, Humans, Nameks, and possibly other DBZ races, but the cool Molyneux twist is that you start playing as a young fighter, and grow to be an adult anime character. That’s a lot of damn hero haircuts, Krillin clones might be a cheapest characters to play. Akira Toriyama has stopped playing Blue Dragon and now plans to help design the new characters, buildings, and backgrounds for this game.

I’m sure there’s already an “over 9,000” population party being planned. Here’s some scans from a magazine showing what we can expect so far. If I ever get a chance to play this I’ll make a Hercule look alike and try to live up to Japan’s generous name for the American character from the show: Mr. Satan.