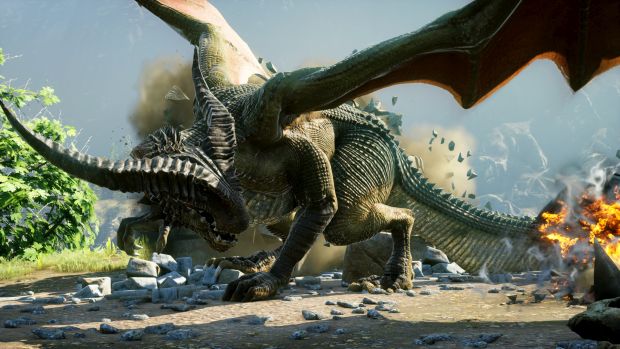 The Blight is over, the Qunari have been driven from Kirkwall, and the mages have gone to all out war with their Templar oppressors. We’ve seen a lot of crisis across Thedas, but all that doesn’t seem to compare when demons and spirits are invading your home. Hide your kids, hide your wife, and hide your husbands ’cause they’re taking everybody out here.

As we already knew, Dragon Age: Inquisition’s story centers around the Veil being torn, and all the creatures of the Fade entering our world. What’s newly revealed, is that the player character, the Inquisitor, will have a closer connection to the Fade, being able to travel to and from. This isn’t restricted to classes either, where traditionally mages are the only ones with a natural connection to the Maker’s first world.

The trailer also shows the return of series staple characters Leiliana and the now ex-Templar Cullen, serving as the heads of the Inquisition’s shadow and military arms respectively. They won’t be available as party members, but their role with the Inquisitor plays heavily into Inquisition’s new War Table mechanic. While exact details aren’t being revealed, the War Table will allow the Inquisitor to send allies away on missions, similar to what Assassin’s Creed introduced with Brotherhood.

Finally, the trailer shows off more of the Inquisitors mounts, so if you’re hoping to live out a Shadowfax fantasy with your mage, here’s the chance. Unfortunately, EA has confirmed that wyverns will not be a mount option, so I guess my Qunari warrior won’t exactly be the beast mode Conan I dreamed of.

Dragon Age: Inquisition is scheduled to release on October 7, 2014 for Xbox 360, PlayStation 3, PlayStation 4, Xbox One, and PC. Those wishing to import decisions from last-gen systems should also check out Dragon Age Keep, a story editor tool that will let you recreate, or create new story data.