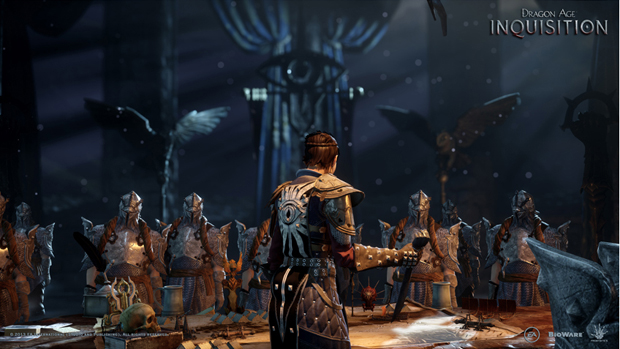 EA president Frank Gibeau recently talked with IGN about why BioWare dropped the “3” from the title of the upcoming Dragon Age: Inquisition. Gibeau said that they “just wanted to draw more attention to the fact that Inquisition is an all-new chapter inside of the Dragon Age universe, as opposed to people expecting a follow-on to Dragon Age 1 and 2 in a literal, linear sense.”

How silly of me to expect sequels to games with unfinished stories to be literal continuations of the story. I understand that they always wanted Dragon Age to be a universe, and not just one game, but hanging plot-lines don’t help create a backstory. BioWare could easily create a new story that ties together the first two games, but it’s not promising to hear them talk about this like it’s another reboot for the series. They tried that angle with DA2, and that didn’t work out too well.

A new screenshot has also emerged for Dragon Age: Inquisition, and it’s exactly what you would expect a Dragon Age game to look like. The new engine looks promising, and the gameplay could be really awesome. The story could be great as well — it’s just annoying that they aren’t planning on directly following up the events from the first game and trying to tie in what happened in Kirkwall. Seems like a huge missed opportunity to me.