While Darrah is right to point out that DA II maintains the Gygaxian foundation of Origins and tightens it, I hope “more of the same” doesn’t become the only message that fans take from the sequel. BioWare has perhaps been gun-shy about broadcasting the changes to the game, but they certainly exist: its new art direction and its fascinating new narrative structure are just two examples.

Dragon Age II is told through a “frame narrative,” that is to say, a story within a story. For example, the most straightforward timeline of DA II is pretty lame: a dwarf named Varric is interrogated by a seeker named Cassandra. He answers her questions, and the game ends. The real meat of the game, though, is in Varric’s re-telling of the story of Hawke, the Champion of Kirkwall.

“We knew what story we wanted to tell for DA II, but we were talking about how we wanted to tell it,” says David Gaider, the lead writer on the project. “Oftentimes, we do what’s called ‘the walk and talk’: you’re in every step that the player takes, talking to every person that the player talks to. A lot of RPGs do that, and we do it all the time. . . . But it also limits the types of stories you can tell.”

Instead of the “walk and talk,” Gaider and the rest of the DA II team settled on a more novelistic approach. “[The game] takes place over a time span where you’re looking at the most significant moments of a character or story,” he notes. “And [videogame developers] don’t do that.” 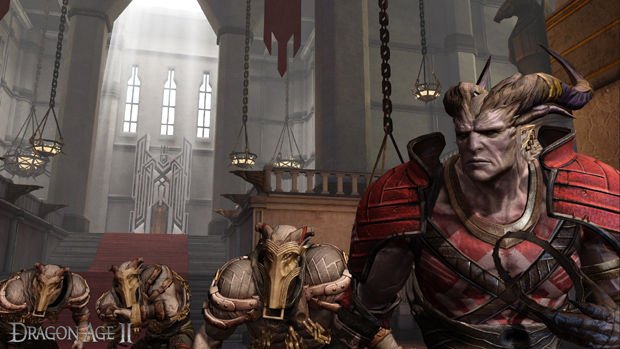 The idea of a frame narrative isn’t new at all — lead designer Mike Laidlaw mentions The Usual Suspects as an example of one, and Gaider points out that The Canterbury Tales featured over a dozen tightly-nestled stories — “but doing it in an RPG, at least for us, it’s nothing we’ve tried before,” says Gaider.

Given Dragon Age II‘s structure, it’s unsurprising that the game is more character-driven than its predecessor, Origins, trading Ferelden macro-politics for one person’s rise to power. The Blight is no longer a threat to Thedas, and Hawke lives — if not happily, then at least peacefully — in Kirkwall for some time. (That’s not to say, though, that Hawke is apolitical — don’t forget that the Chantry is after her.)

Even the surface-level changes suggest a strong narrative shift: Hawke is given a name, a voice, and a backstory — a far cry from Origins‘ Build-A-Bear Warden. “Where I think Dragon Age II kind of stands out is that we don’t do it with the impetus of the world needing to be saved again,” Laidlaw asserts. “There isn’t necessarily the Sword of Damocles hanging over your head, where failure will result in everyone’s death.

“And so, instead of ‘The World Needs to be Saved!,’ the world is going to change and I’m curious as to how,” he continues. “I’m drawn forward through a different kind of impetus all the way through the story. But your character is still growing; your character is moving from boy to man, but more importantly, moving from refugee to Champion.

“And that creates a really interesting growth arc because it’s driven in a different way than we normally would do.”

That growth arc seems particularly suited to role-playing games, whose mechanics prioritize a steady growth of power and skills. Laidlaw even describes Dragon Age II as a bildungsroman, a literary structure that charts the protagonist’s moral and psychological growth through time. “In terms of the character’s growth, what I think we do very clearly is establish what maturity means,” Laidlaw states. “What is the mature version of the character you’re currently playing?” 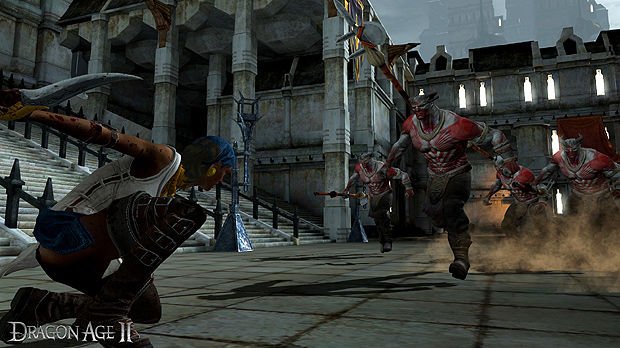 While Gaider and Laidlaw were excited about creating a lofty, ambitious narrative structure for DA II, the execution presented a unique challenge: how to fit the ten defining years of Hawke’s life into one game. “A videogame is a really big story,” Gaider explains. “You fit a lot of stuff into the amount of time you spend in a game.” The solution: Varric, who is telling the story, will skip over years of events in order to hit the next hallmark of Hawke’s life.

The time leaps were “just different enough that it added something interesting in the mix,” says Gaider. “Especially building relationships with followers over the years, and seeing the consequences for your actions more immediately than waiting for the epilogue at the end of the game.” Laidlaw takes a slightly different approach to the missing segments: “The key is, if you’re going to take away years of content . . . and move to the next interesting bit — the moments that really help define how you become the Champion — what we want to do is make sure there’s a payoff for that.”

Laidlaw describes that payoff as a chance to re-discover Kirkwall each time. “It’s a new game,” he says. “It gives you that [sense of discovery] multiple times. And what it really does is let you see that you made certain choices and how things played out.”

On the other hand, it’s a shame that some elements of DA II stay static, despite the time shifts. Art director Matt Goldman tells me, for example, that Hawke won’t age during the ten-year period that the game covers: “From a storytelling aspect, the other characters change [and] upgrade around you. The game is about wish fulfillment and player choice, so we didn’t want to change around the player character against your whims.” 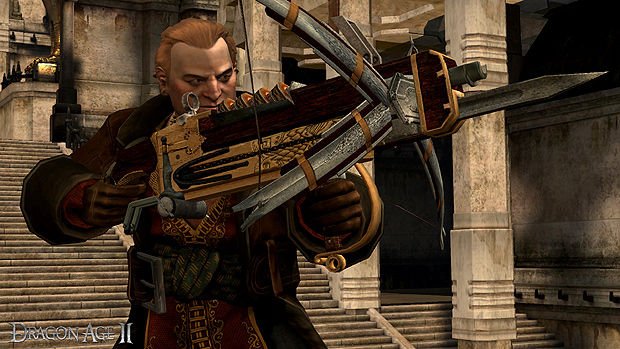 The breaks also create distance between the player and Hawke. After the first time jump in the game, a rune salesman greets Hawke as an old friend, even though the player has never seen him before. It’s a subtle reminder that Hawke and the player aren’t the same character, and that, in the background, Varric is the one in charge.

I try to see how deep down the rabbit hole goes, but Gaider cuts me off at the pass. “You don’t want to get too nebulous, though, to the point that the player suspects that everything he is doing is all a lie. That’s going too far,” he declares. “You want to give the player enough agency that they feel that they are the one telling the tale, not Varric.”

Eventually, though, Gaider concedes my point just a bit, admitting that the player’s choices reflect back to Varric’s story: “I think it’s fair to say that you’re the puppet master . . . it’s a different type of interactivity. Is it the same as feeling like you’re directly in that character’s shoes? I think it’s just as legitimate. It is role-playing. It has the potential of having more impact.”