It’s not uncommon for fans of upcoming games to go on media blackouts — actively avoiding screenshots, trailers, and previews so as not to spoil their initial impressions. So far, that hasn’t been difficult with Dragon Age II — if you weren’t at E3 or PAX this year, chances are you haven’t seen it in action. “Where’s my PC footage?” has become the battle cry, explains lead designer Mike Laidlaw.

As is (unfortunately) common in game fandom, people are assuming the worst, but Laidlaw’s taking it in stride. “I think the anger, such as it is, is that thusfar we’ve mostly talked about what’s different,” he says, admitting that they’ve been keeping a lot of the gameplay details close to the chest.

A bemused Laidlaw dismissed some of the most common complaints. When asked if Dragon Age II were an action game, he counters that there’s no reason RPGs need to be slow. Accused of pulling the voiced Shepherd from Mass Effect and turning him into DAII‘s Hawke, “Because apparently Mass Effect only has one defining characteristic,” is the retort.

And yet, Laidlaw finds a silver lining — all of these  complaints simply point to a wide fan base, especially on the PC. “And of course what you see when it comes to fans … Origins has a ton of PC fans, obviously. And of course, when you look for complaints, it’s rarely the guy with the Xbox 360 logging into forums to yell.”

Furthermore, he says he understands why they’re angry. “And then I think … essentially, [fans are saying]: ‘You’ve made consoles look better? But I’m a PC gamer. … You’re talking about things that seem to attack me because … in my mind consoles are somehow worse than PC games.’

“And anyone can screw up change,” Laidlaw continues. “Absolutely.” 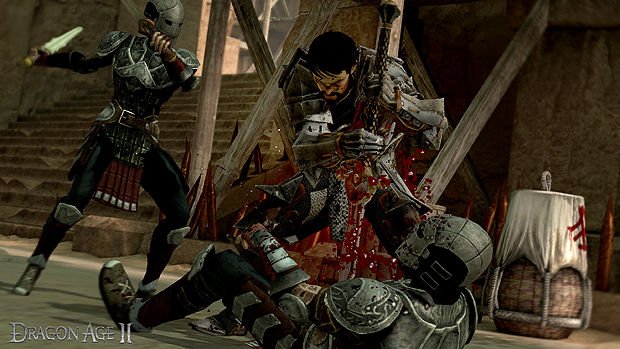 If he had a chance, he says he’d love to just be able to show the game to fans. “It takes a lot of the edge off.” And this is coming soon, he says, “now that we’re at a point that we’re happy and we can show the PC gameplay and the footage that we want to show, not the mid-stage development.”

“Because I don’t think the average fan is able to extrapolate what kind of change 140 people can do in four months. So what I want to do is show them … There’s still tactics, there’s still inventory, the dialogue still has your voice and has it in a cool way, and essentially … it’s still Dragon Age.”

At this point in our interview, Laidlaw had something of a zen moment: “And really, I think that’s the heart of it. ‘Have you changed everything? Because I really liked what you did last time.’ Which, honestly, it’s a compliment.”

Dragon Age II hits store shelves on March 8 in North America and three days later in Europe. You can check out a preview here.