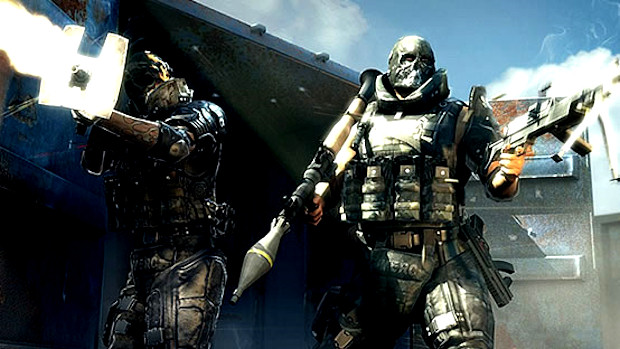 Videogames and comic books. Is there no greater marriage? Not according to the many publishers that want their upcoming game committed to ink for all eternity, in any case. The latest company to join the comic book craze is Eletronic Arts, announcing a deal with IDW to put Army of Two and Dragon Age: Origins down on paper.

Peter Milligan (X-Men, Batman, Hellblazer) will be penning Army of Two, due out in January 2010, and you’ll never guess who’s writing the Dragon Age book. It’s Orson Scott Card, the man who became the center of a big Shadow Complex debate a few weeks ago, when his anti-gay campaigning caused quite a stir among gamers. Looks like something for the boycotters to shun.

Anyway, if Card’s politics don’t bother you, or you simply hate gay people, you might want to check out that comic. You’ll probably want to skip Army of Two though, as that game always had a hint of the homoerotic about it.

REDWOOD CITY, Calif.–(BUSINESS WIRE)–Electronic Arts Inc. (NASDAQ:ERTS) announced today that it has signed a deal with IDW Publishing to expand two of its intellectual properties, Army of Two™ and Dragon Age™, into comics under a new EA™ Comics imprint with IDW beginning in January. EA and IDW will launch monthly, ongoing series for both Army of Two and Dragon Age. Each issue will be published in print and distributed nationally at comic book outlets, with digital versions released for iPhone™ and iPod® Touch and other emerging digital platforms.

“We’ve seen an increasing number of video game tie-ins with comics over the last few years. This marks another step in our strategy for extending EA’s wholly-owned game properties to new media. It is exhilarating to be working with the comic book creators directly,” said Mike Quigley, Group Vice President, Global Marketing, EA Games Label.

Under terms of the agreement, EA will fund and manage the creative aspect of the comic book series, while IDW will be responsible for printing and distribution. IDW is the leader in digital comic book distribution and the nation’s third largest comic book publisher overall.

“This is a great opportunity for IDW to work with a worldwide leader in video games,” said Greg Goldstein, chief operating officer for IDW. “We look forward to bringing a tremendous amount of great content into the comics market.”

Written by veteran comic book writer Peter Milligan (X-Men, Batman, Hellblazer), Army of Two is being published as a comic starting in January 2010. Rising star Chester Ocampo is the cover artist while the interior artist/penciler, Dexter Soy, is a ‘hot newcomer’ on the comic scene. Soy’s work suggests influences from well-known comic artists such as Whilce Portacio and Leinil Francis Yu. The first story arc, “Across the Border,” follows ex-Army Rangers Salem and Rios as they form their own Private Military Corporation: Trans World Operations. The story of the comic follow the events of the first Army of Two game but takes place before the deadly invasion of Shanghai by The 40th Day initiative in the videogame sequel. In the comic, Salem and Rios get more than they bargained for as they are unexpectedly caught in a brewing war between the Mexican Army, drug cartels, and The Maras – one of the most powerful street gangs in Mexico.

To sign up for the EA Comics mailing list, register at: https://www.eacomics.com. The site will have complete information on all the EA comic book series, as well as unique “behind the scenes” content, news, blogs and artwork. The site will feature weekly content updates to keep audiences apprised of the latest developments on current and upcoming projects.