And it all makes some kind of sense

“Dragomon Hunter is one of the games where we’ve made the most changes [to appeal to the western audience],” Aeria Games’ Product Marketing Manager Alexandre Bousquet tells me. That doesn’t mean shaving the points off of spiked hair tips for use as beard stubble or turning onigiri into jelly donuts. The anime-styled MMO is currently in open beta for France and the United States, two western territories that are down with Asian-influenced animation. Even the name, Dragomon Hunter, is meant to spark the heart of anime fans.

But, wait, why is a German company releasing an anime MMO in the USA and France? 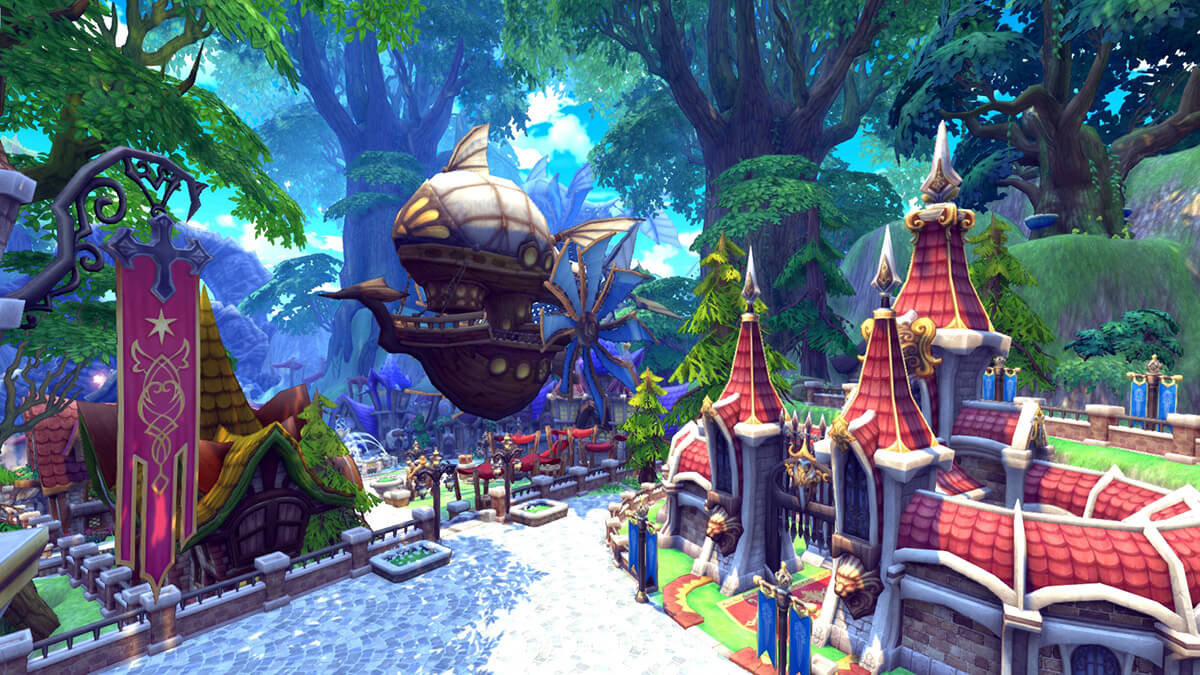 It doesn’t clear anything up, but Aeria Games actually started in Santa Clara, California almost a decade ago. It expanded globally, including into Berlin, as a a publisher and online portal (maybe you noticed the logo playing Tribes: Ascend) before being purchased by multi-billion-dollar German media conglomerate ProSiebenSat.1 Media in 2014. But even before getting Katamari’d up, Aeria boasted over “40 million players” and turned enough of them into paying players to finance continued publishing.

“They basically leave us alone,” Vice President, Global PC Games Business Tom Nichols said of his parent company. Of course, the advertising deals that affords alone are helpful. “The German market is much easier for us especially in regards to competition, it’s easier for us to be visible,” Bousquet said. “It doesn’t always means that its necessarily a success. There’s still a high dependence on the games and their mechanics and if they appeal to this audience. For instance, anime games, they work okay, but the two big markets are really the English and French markets. Germany’s not really into anime stuff.”

The extra advertising oomph, helpful in Germany when Aeria is peddling more regionally popular medieval fantasy is somewhat emblematic of Aeria’s strength, which is packaging something up for consumption by a new audience. As Nichols explained, “What Aeria does is take games that have been successful in Asia and brings them to the west.”

So the aforementioned “most changes [to appeal to the western audience]” for Dragomon Hunters are not for a general western audience, but knowingly for, “a much smaller audience…much more niche within anime MMOs,” and that is the ultra chibi style. It is for western anime fans. The Japanese Dragomon Hunter publisher — no, it’s not a Japanese game — brought on well-known anime voice actors (from the likes of Bleach and Naruto) and the western landing page has a link to a video excitedly pointing to, “the original Japanese voices” in this French and American localization by a German company of a game originally developed by Taiwanese developer X-Legend.

I chuckled about anime-game fans who threaten boycotts over digital-only releases or the lack of dual language audio. “It’s a very special audience,” Bousquet said.

The original title is Dragon Slayer. Bland, but much less of an obvious, broken-neck nod to Monster Hunter (the game is slightly more action oriented than many MMOs) and Pokemon (collecting). “We thought it didn’t fit the genre or didn’t communicate what the game was about,” Bousquet said. “Dragon Slayer sounds like a game title you’ve heard a hundred times. You have a basic idea of the setting, but you have no idea what the game is. We wanted a title that caught attention just from hearing it.” That’s one way to do it.

“I know some people, the first time they see it, they kind of interpret it as, ‘oh, this is a ripoff,’ but we feel it’s much more of a tribute and a nod [to Monster Hunter] than a ripoff. If you look at the game closer, there are some similarities and …. the idea of collecting materials from slain enemies and using them for crafting is not a new idea, but this is an MMORPG at its core. It’s not an action, skilled game. It takes cues from this existing game style, but takes very few elements from that.” 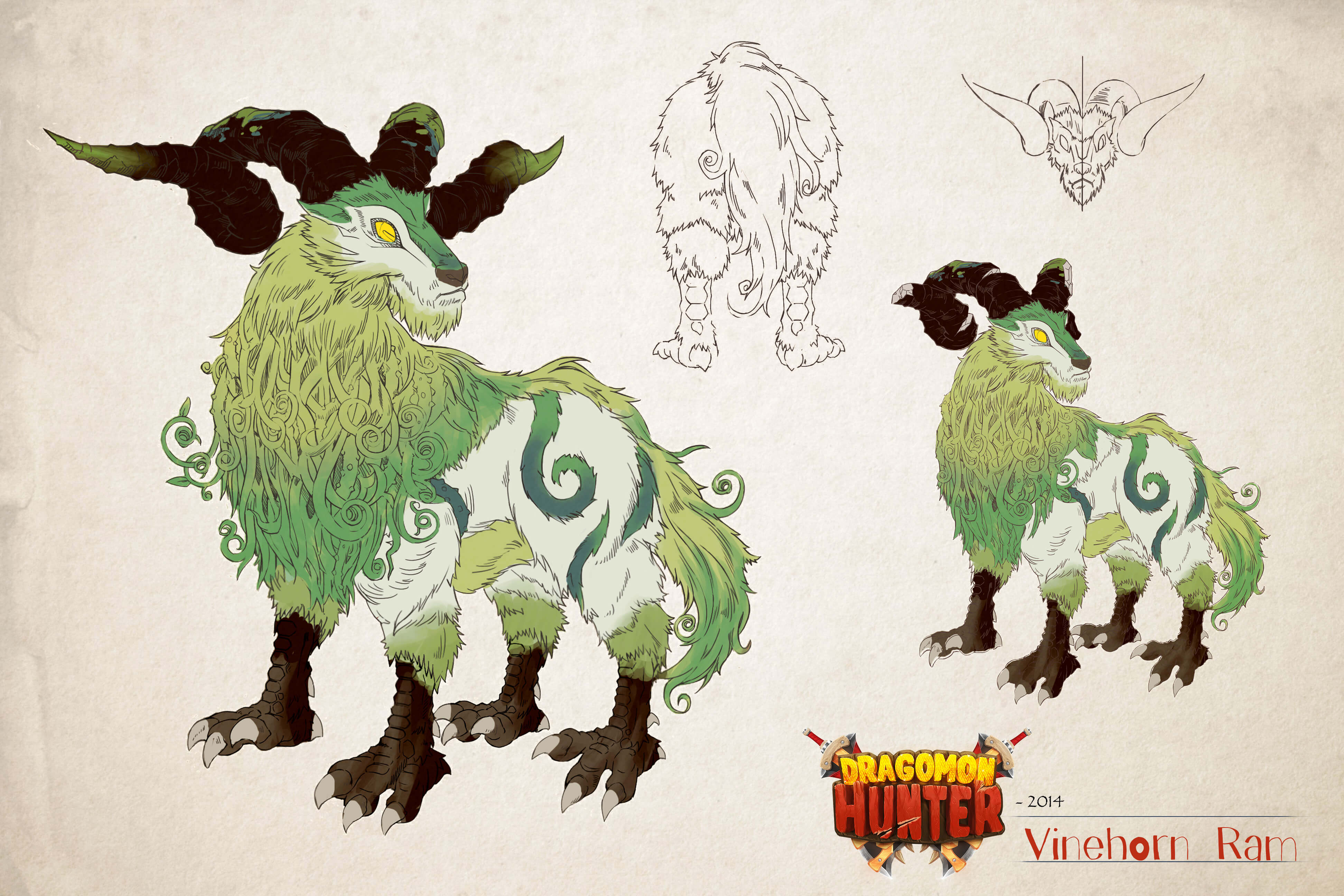 Playing up the [anime life]style isn’t restricted to the title. The translated script is reference filled for game and anime fans (the story is sparse, so it doesn’t necessarily come in at odds with a greater tone). “[Dragomon Hunter has been localized by anime and game fans for anime and game fans. We’re not shying away from being referential and doing a few nods here and there.”

But the biggest changes in Aeria’s fourth collaboration with developer X-Legend (you can still play the first, Grand Fantasia) have been on the gameplay side. “Most of the Asian RPGs are very grindy, like super hardcore grindy, which is something we try to get away from a little bit and be more action-player friendly.” There are “better drop rates” and everything can be bought with in-game currency (versus spending real money).

The tendency for Asian players in these types of games is to try out different classes and explore all the game’s options, whereas western audiences seek out of whatever’s figured to be the strongest class and work towards maxing levels and the like most efficiently. The archive system for the over 100 in-game mounts (all of the enemies have a chance at dropping an egg upon death, at which point you can use the monster as a means of transportation) doesn’t exist in the original, but was added because, “Americans and Europeans like to collect things.” Historically true! 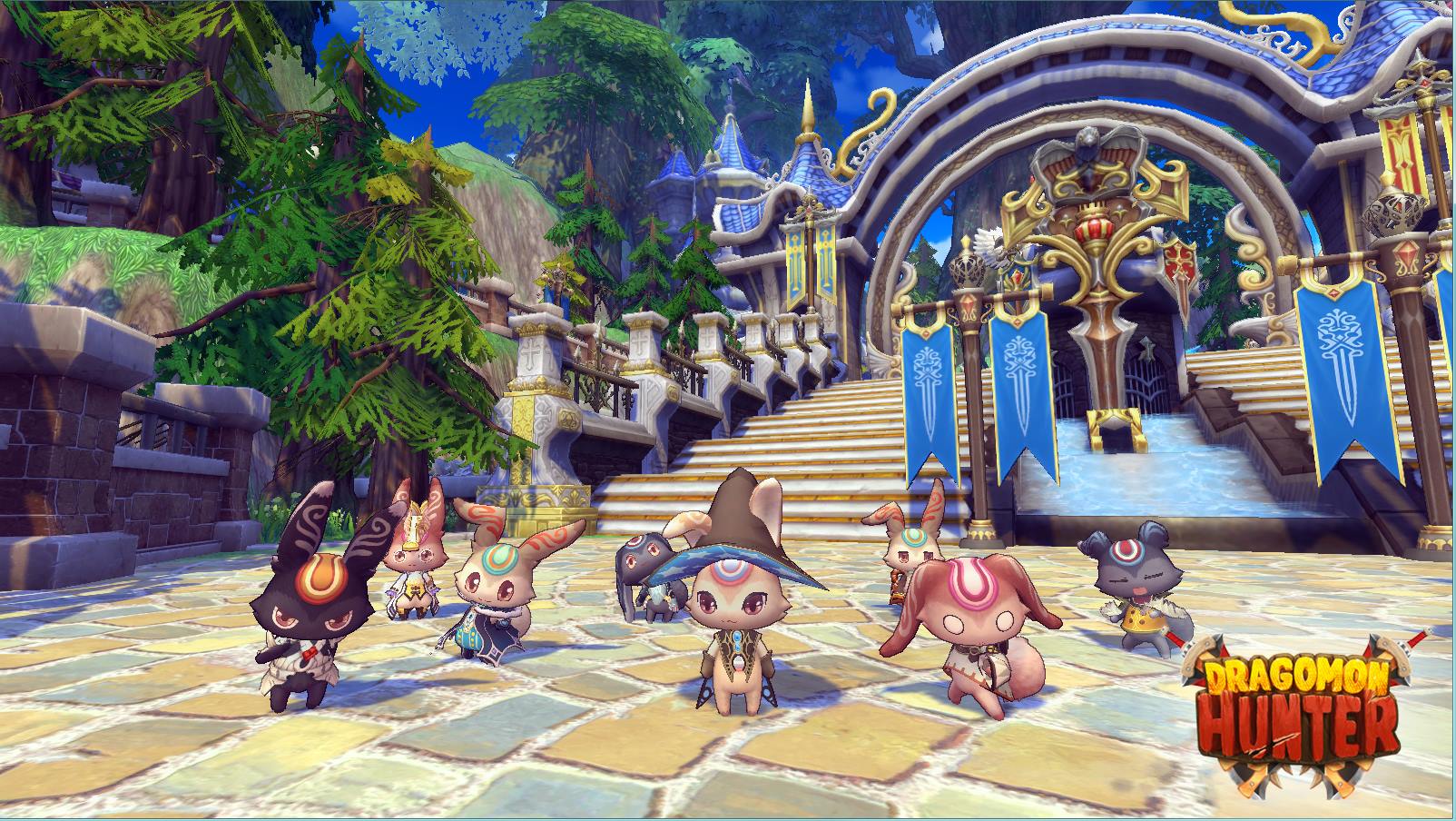 Dragomon Hunter also features controller support, something developer X-Legend neglected to mention because of how much of a non-feature it was in Asia, but that’s a bigger deal in the US. And while Dragomon Hunter doesn’t lean as far towards pure fighting game as something like Blade & Soul, movement is ostensibly important. I didn’t find it too necessary in the early goings, the few hours I played from level one, but watching some high-level co-op plays against much more imposing baddies and opting to steer clear of a big, incoming attack is a smart move. Otherwise there are classes to choose from, monsters to catch (or buy), and Hoppalongs, your companion rabbits you design at the onset after making your player avatar. They’re super cute and can be classes to balance and pair well with your character.

And of course there’s the need to preempt “pay-to-win” complaints that inevitably crop up around free-to-play properties in the west.”What most companies like ours were doing was looking at game monetizing and saying you know what, we have those whales — those few people who are spending crazy amounts of money and that’s enough, so let’s just focus on those people,” Bousquet explained.

“But that means it’s extremely difficult to get people into the game because you’re bringing in new people who are not going to have fun. They’re going to go in there and the paying players are going to have fun slaying them, and those [new] people are not going to stay. What we’re trying to do now is only focus demonetization on convenience and vanity…in those anime games it is very important and does resonate with an audience. If people want to buy their mounts, that’s up to them. If they want to hunt them down and get them as drops from the monsters that they slay, anyone can do that.” The aim is to reward “people coming in and logging into the game often enough and staying in the game,” versus just reward those who are “paying money up front.” 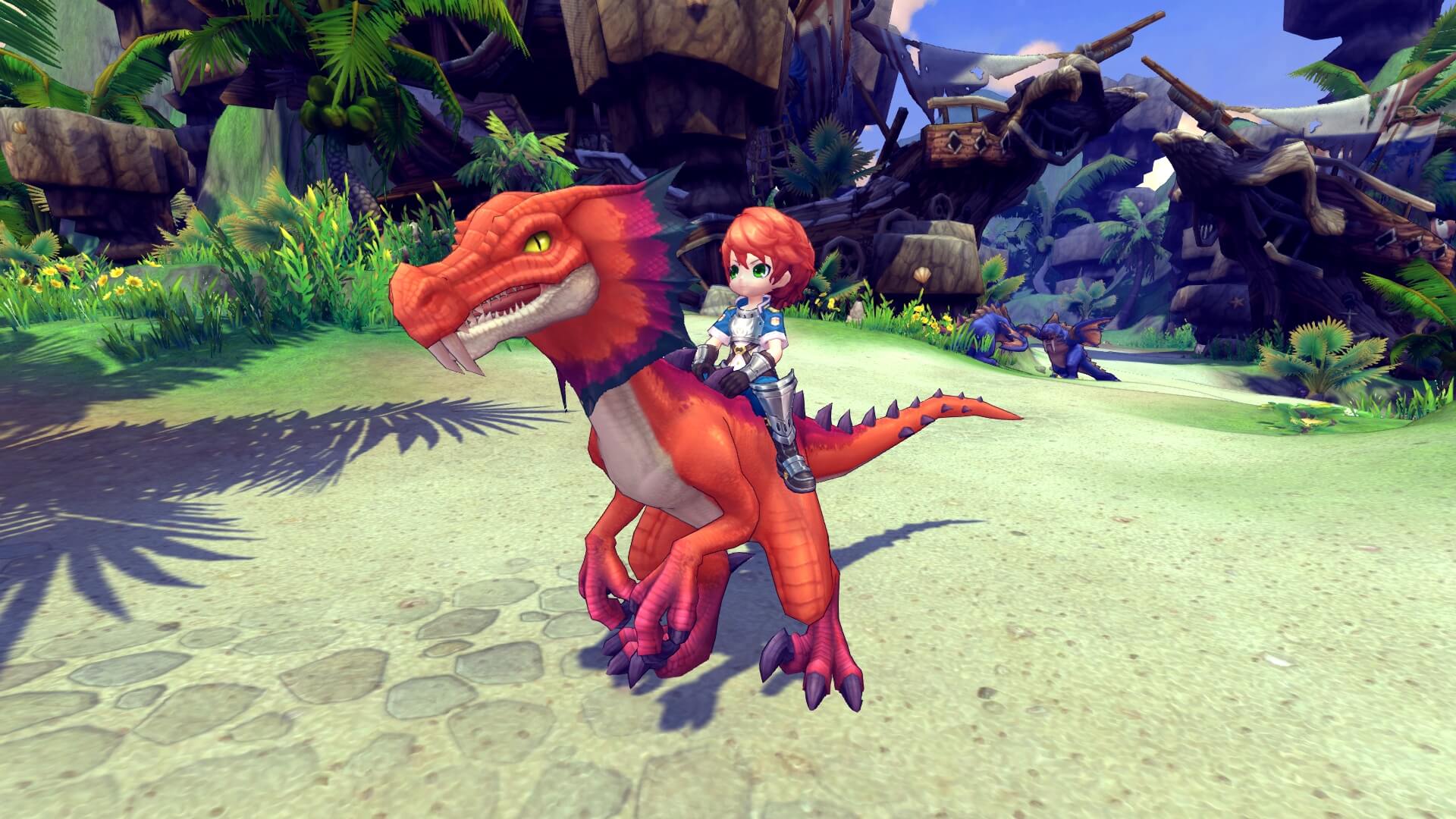 For a fun counterpoint to Dragomon Hunter, there’s the trading card game Immortalis Aeria published on mobile. It took a card game that was successful in Japan and replaced the art assets wholesale while keeping the original gameplay mechanics. The more western fantasy art style worked and the release has a big success for Aeria. The company has gotten good in predicting what will sell and how.

This year’s fantasy MMO Echo of Soul was the biggest launch yet. “There’s nothing about the game that makes it really stand out in terms of, ‘oh, this has an innovative feature,'” Nichols said. “The MMORPG genre is really crowded so it’s hard to come up with a new feature that nobody has done before, but EoS is just really polished and has all of the features an MMO gamer would want.”

Aeria seems to know what MMO gamers want; it’s a fair, mid-Mel-Gibson-era claim when you’re still running your first-published anime MMO six years later and simultaneously launching your fourth from the same developer. And Aeria is diverse, blending anime and fantasy MMOs with shooters and mobile development all while reaching interntional audiences. “The Turkish market loves shooters. They don’t spend a lot of money, but there’s a lot of players,” Nichols said. You can still play WolfTeam, a shooter that lets you transform into a powerful wolf (that aspect is most popular in Germany).

As for the future beyond Dragomon Hunter? Nichols sees, “fewer PC MMOs and shooters coming out of Asia” because of the mad dash towards mobile, “as a result, our PC business is kind of stable. We’re launching one or two games a year at this pace, whereas two years ago we were launching four games a year. The growth strategy for our business is coming from mobile. We have four games all set to launch early next year. Each one of those games was very successful in its native market in Asia. We’re optimistic that a game that can be successful in Asia will be successful in the West as long as we make the art and style of the game appropriate for the Western market.”

But mobile is getting full up, too. “We’re seeing some signs that some of the developers are shifting back to PC because the mobile market is so competitive,” Nichols said. “I thought, Capcom and Konami, they’re late, because they’ve been so focused on consoles.”

“Even huge companies like Supercell are doing TV advertising in Korea — that never happened before in Korea.” You might remember Supercell’s $9 million Clash of Clans commercial that aired during this year’s Super Bowl in the states, unless you mute commercials and use the time to thumb through your phone or grab a drink. “And all the Korean developers are like ‘what the hell is this,’ because they can’t spend that much money.”