[Promotions for last week’s Bloggers Wanted topic, Downloadables, begin today! With so much negativity over the last couple weeks, I wanted to do something happier. Every day from now until Friday, you’ll be seeing blogs from some of our community members on their favorite downloadable titles from XBLA and PSN. Our first promoted blog is from bbain, who wrote about Stacking and Costume Quest. Don’t forget to write a blog on this week’s topic, Motion Control! — JRo]

After their first two big budget console games, Psychonauts and Brütal Legend, met with only minor sales, Tim Schafer and his team at Double Fine decided to work on some shorter downloadable titles for the Playstation Network and Xbox Live Arcade. This was a wonderful idea on their part, as their team comes up with some of the most creative scenarios and designs in the video game industry, ideas which would have a very difficult time becoming a success in the big budget gaming market. Focusing on smaller downloadable productions, they could essentially make whatever game they dreamed of making, and it would work since production costs would be much lower and they have already accumulated a rather loyal fanbase who would buy almost anything they released.

Within a few months, Double Fine was able to release two stellar titles for the PSN and XBLA: the trick-or-treat adventure Costume Quest and the Russian nesting doll adventure Stacking. Both of these titles would have been a hard sell in the console gaming market, so the downloadable market was definitely the way to go.

Costume Quest is a Halloween-themed game centered around the best part of the holiday: costumes and candy! The main characters are twin brother and sister, and you can play as either twin. As you begin your night of trick-or-treating together, your twin is suddenly kidnapped by a monster who mistakes his or her candy corn costume for actual candy. Thus begins your quest to rescue your twin from the monsters.

Throughout the game, you will collect candy, meet new friends and battle monsters using different costumes. When you enter into a battle, your homemade costumes become actual realizations of what they’re supposed to represent, so you can battle as a heroic knight, a rocket-launching robot and more. Although the battles themselves seem a bit stale, the fact that your cardboard robot costume becomes an actual robot in battle really makes me happy. This is what a child’s imagination is all about, and why Halloween was always so much fun. As a kid, you weren’t just walking around with a sheet over your head or a cut-up cardboard box wrapped around your body, you were walking around pretending to be an actual ghost or robot and trying to scare or impress your friends. I thought they expressed this childlike imagination wonderfully in the game. 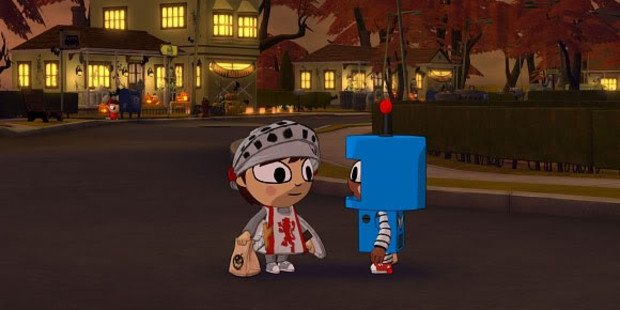 The Halloween atmosphere of the game was also very well done. The creepy music, autumn evening setting, and neighborhood filled with Halloween decorations and costumed children all fit perfectly together to capture the very spirit of the holiday that I always looked forward to as a kid. The game’s dialogue is also very witty and entertaining, which comes as no surprise being a Double Fine production. I also loved the family relationship and twin rivalry of the main characters and the interactions between the neighborhood kids. It all seemed very real and believable.

Unfortunately, I haven’t yet played the entirety of Costume Quest, only the demo. I somehow missed the game when it was first released, so I’m waiting until Halloween rolls around again this year so that I can play it in the proper frame of mind. I can’t wait for Halloween this year to play the rest of this game, and I fully intend on making it a tradition to play it around Halloween for years to come!

About four months after the release of Costume Quest, Double Fine quickly released Stacking, another top-notch downloadable title. Stacking took a very unique idea of creating a world inhabited by Matryoshka dolls and ran with it. I’ve always found Russian nesting dolls to be strangely fascinating for some reason, but I certainly never expected to see a video game based around them, and from one of my favorite developers no less. Needless to say, when I first heard about the game I was quite surprised and very excited to hear that such a game was actually going to exist.

In Stacking, you play as Charlie Blackmore, the tiniest nesting doll of a chimney sweeping family, in his quest to reunite his family by rescuing his brothers and sisters who have been forced into child labor by the evil industrialist, The Baron. The gameplay is rather innovative, centering on the stacking mechanic of the nesting dolls. Charlie has the ability to stack with any doll one size larger than him and can utilize each doll’s unique abilities to solve puzzles. Each puzzle has more than one solution, so it’s usually not too difficult to progress through the game, although trying to figure out every solution to each puzzle can provide a bit of a challenge. The solutions are often rather ridiculous and humorous, such as flatulating into an air vent to clear out a room or seducing a guard to get him to leave his post. 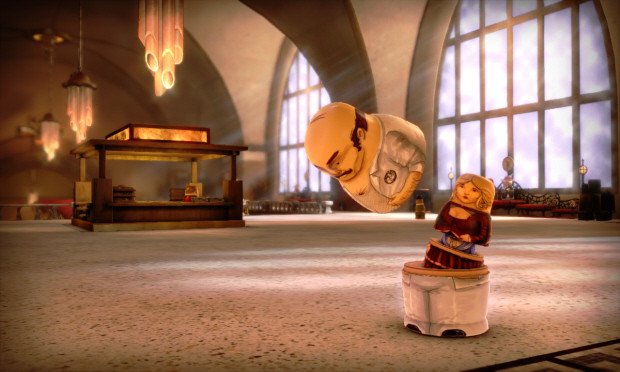 The game has several different tasks that can be completed for each level, providing a lot of fun for completionists or players looking to get more out of the game. Aside from finding all possible solutions to each puzzle, there are also unique dolls to find, matching sets of dolls which you must stack together, and hi-jinks to be discovered by using certain dolls’ abilities in specific situations, such as using the little girl to play tag or using the gentleman doll to slap other dolls with a white glove. I had loads of fun just wandering around and stacking all of the random dolls that I came across just to find out what they did.

Stacking has an interesting mix of different themes to go along with the Matryoshka dolls. The settings and plot seem to be inspired by the Great Depression or the Victorian era, while the levels also contain various oversized household objects to give it a doll house or diorama feel, kind of like LittleBigPlanet. The cut scenes take after the silent film and theatre traditions, with curtains opening to introduce the scenes and intertitles used to display dialogue which is being acted out, along with a lovely classical piano-driven soundtrack. Everything works very well together to create an excellent, one-of-a-kind game.

To keep things going on the downloadable front, Double Fine also released Trenched for the XBLA last month. It’s a third person shooter with giant mechs which looks interesting, although I haven’t gotten a chance to play it yet. Even though their games don’t usually sell very well, Double Fine has constantly developed critically successful games that tend to become cult favorites among fans. While games such as these don’t tend to find much success in the big budget console gaming market, they have luckily been able to thrive in the newly created downloadable market. I love being a gamer in this day and age when even the strangest and most unique niche titles have a place somewhere in the industry.