[Today’s promoted blog comes once again from AwesomeExMachina, who really, really likes Castle Crashers. Want to see your own blog on the front page next week? Make sure you get your Motion Control blog written before Monday. — JRo]

A friend and I sat down to play X-Men Arcade a few weeks ago with his younger brother. Despite his youth, he only once made a disparaging comment about the game having only three basic buttons. After a few rounds and a couple deaths, we burned through the meager amount of starting lives. It was then that he expressed confusion over the concept of a ‘continue.’ He asked me what it meant. I explained that it simply signified that we could continue playing with another chunk of lives. He asked me why the game just didn’t give us more lives, then. A good question. It took me a few minutes to explain a term he had never once heard. Quarter eater.

The concept of a proper arcade is completely foreign to those of an early generation of gamers. Lamentable as that is for a old hand like myself, there’s no need to drag him down to the nearest dying arcade so he can change a perfectly good ten dollar bill into poorly printed gold coins, just to get harassed by a scoreboard-hungry cashier from the local Arby’s. Arcades are all but defunct, but it would take more than a few foreclosures to force their impact out of today’s games and the passion for the retro insanity of those classic games out of today’s gamers.

Thanks to the eternal flame that is nostalgia, our current generation is blessed with a retro-revival. A renaissance of 2-D sidescrollers and two button masterpieces built with modern technology around a retro-heart. It’s a unique time, when we can recreate and relive our favorite arcade games in the mindset of contemporary gaming. Classic and new genre-faithful games can integrate themselves with leaderboards, co-operative technology, and updated graphics. And no game better represents this mayhem of item-hoarding, 2-D melee, and near epileptic levels of on-screen chaos than a popular little XBLA and PSN title known as Castle Crashers.

I don’t remember who first introduced me to Behemoth’s most successful title and that fact in itself is telling. One doesn’t need to be shown extensive trailers or watch pre-rendered footage to feel captivated by the game. You understand the controls just by glancing at it once, making the learning curve nearly non-existent like the arcade beat-em-ups that precede it. Even the humor is simplistic, yet amazing. I still always run behind the owl before it poos in the bush and pretend to act surprised. Every aspect is at the ground-level of understanding, but built on an engine of complexity. That’s the mantra of the arcade: simple in controls, eye-catching in visuals, and ruthless in execution. 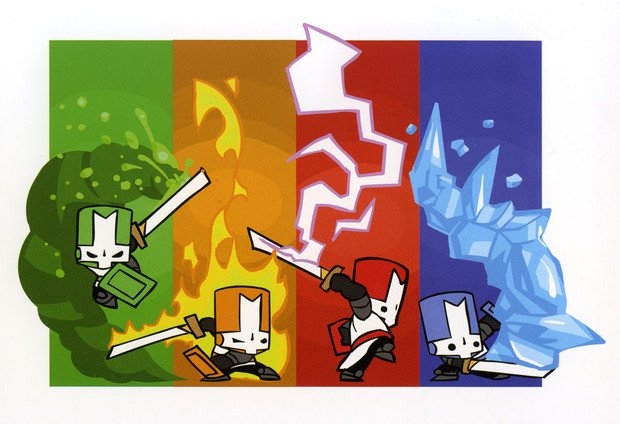 You can jump and attack, of course. But the true litmus test of legitimacy of classic sidescrollers from days gone past lies in the ability to jump and attack at the same time. We can all remember trying that combination and scoffing at any game that dare ignore it. Toss in the capacity to cast varying levels of magic spells in conjunction with all these existing moves and you’ve got yourself a healthy combat layout worthy of the days of Double Dragon or Streets of Rage. In fact, it’s even grander when combined with a level-up mechanic that can put you on your own customized path of move-sets and strengths.

The graphics are something classic retro games couldn’t master, crafted with a cartoonish hand-painted-style with a modern, glossy sheen. Like classic titles, it too exudes disjointed insanity, as if co-designed separately by seven programmers and artists who never conversed or one really, really schizophrenic one. Cat-fish bosses the size of the screen, lava people, orb-shaped animals that give you powers, shitting bears, painted unicorn enemies, a chicken sword. The list goes on.

But Castle Crashers borrows something else from days gone by. A relentless, unabashed ruthlessness to the player. It’s not hard to perish in any of the brutal levels and it will happen frequently. There’s no chance to pause to select and use your items or any chances to slow down combat at all. There is no AI sidekick or disembodied commander voice to point you towards the weak-points of boss characters. That’s on you and your friends to figure out. Rare swords appear for only one player to snag, unless you have time for a rodeo swap-session. Which you often don’t.

Other, even more rare items are cruelly hidden and nothing in the game belies their location. It’s luck and blind chance that will find you some swords. But it’s this perfect alignment of secrets that awakens something in gamers. That moment where you’ve peeled back a layer of game without being guided by in-game clues or Internet intervention. A true, legitimate find worthy of calling up a friend to brag about. You become, once again, the first kid on the block to find the World Warp or faced the green ninja in Mortal Kombat’s Pit Stage. 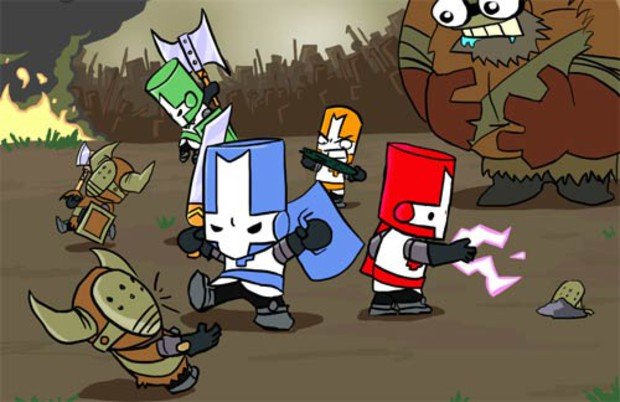 In fact, the gentlemen at Behemoth may have brought back more than they even intended with Castle Crashers by attaching one last crucial element from the classic days of beat-em-ups and arcade titles. Loss. As if channeling the days of cracked N64 cases and dusty cartridge ports, an unfortunate glitch with the initial release of the game corrupted save data seemingly at random. I myself turned on my Xbox, friends gathered on the couch, and fired up the title screen only to discover every single unlocked character, sword, animal orb, and save file had been completely, irrevocably erased.

Crushed, I began anew and leveled meagerly back towards my original success with the help of some friends. Exploiting a few glitches to recover from my errant loss, we were able to close back in on my previous levels, character unlocks, and items. Until it happened again.

A second loss was followed by a third, which was the final straw and the end of my patience. Castle Crashers was not fired up in my house for a few months until a patch would come to relive me and the other beleaguered casualties of saved files around the world. But, it’s an impressive compliment that I withstood all that punishment and loss and even returned. Had Assassin’s Creed or Bioshock given me that kind of grief, erasing hours of progress even just once, I would have tossed the disc aside with a scoff, unworthy of my time. I’d write a nasty letter to the designer or publisher and return the game to the store within the hour. Even though Castle Crashers hails from the modern era, I still gave it the same room for error and occasional programming hiccup as I did any classic title.

This is why Castle Crashers is such a love song to gamers from classic arcade days. Meticulously sculpted levels, unique art, compelling universes, and inadvertent punishment all intermixed to create blistering, unrelenting fun. It reflects on a category of retro-enthusiasts that are tougher than your average player. Gamers who are less likely to ostracize a game for a slight graphical tear or stylistic choice and roll their eyes at lengthy, hand-holding tutorials. Players that prefer making their own discoveries and sifting through playthroughs to find truly hidden secrets.

Castle Crashers is a faithful grandchild of a time when simplicity was bliss. Fun was the solution to an equation that was nothing more than guys to kill + cool moves to do it with. Thanks to modern innovation, the title was able to merge it with an item system, a robust level-up mechanic, online play, beautiful visuals, and competitive combat. It’s even more evidence that gamers are patrons of a media like no other. We don’t simply idolize our great games of past days, but lovingly re-release them for a modern audience. Even more impressively, we create spiritual successors to classic titles, harkening back to a time of joysticks and pixels. Castle Crashers is the proof that gamers don’t forget their roots, they reinvent them. 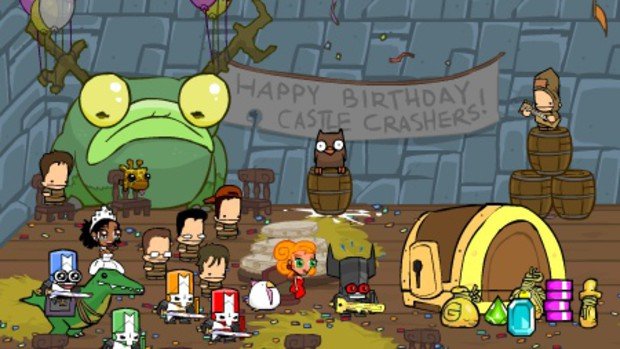