[Today’s promoted blog comes from Cadtalfryn, who tells us why he enjoyed Bit.Trip Flux. Downloadables promotions will continue all week — make sure you get your Motion Control blogs posted before the deadline next Monday! — JRo]

Nintendo’s WiiWare service is an often overlooked downloadable platform. Mismanaged, plagued by shovelware, and outcompeted by XBLA and PSN, the Wii’s online store limps forward delivering a game or two a week to the Nintendo faithful. Once in a blue moon something compelling will land on the service, only to go largely ignored and underappreciated by an audience that either doesn’t know it’s there or simply doesn’t care.

Over two years ago I happened upon a colorful Pong-inspired rhythm game that would soon spawn a series of its own. The distinctive retro aesthetic and catchy chiptune-inspired soundtrack won my heart almost immediately, while the challenging gameplay kept me hooked. Just a few months ago Gaijin Games completed that series with the release of Bit.Trip Flux. It’s tragic that few outside a hardcore following have heard of the game, as it’s one of the best games on the system if not the entire generation. 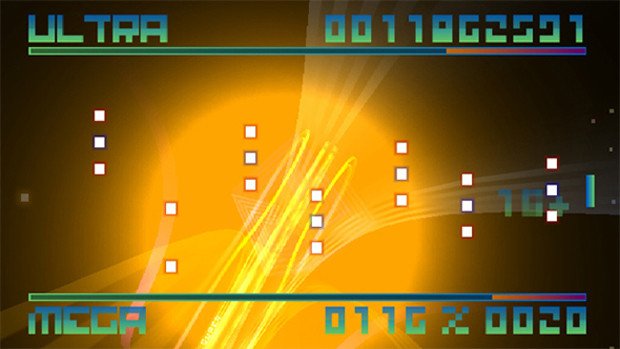 To the casual observer, Bit.Trip Flux appears to be Bit.Trip Beat in reverse. While that is correct to some extent, it’s also a massive oversimplification. Flux and Beat both share rhythm-based Pong-inspired gameplay in which players must repel waves of blocks with a paddle. As with the other titles in the series, success in the game will correspond to changes in the game’s music and visuals.

The core gameplay is still as addictive as the day I first bought Bit.Trip Beat on WiiWare over two years ago. So addictive that, much like how I spent the night prior to Bit.Trip Core’s release determined to defeat Beat’s final level, I played Bit.Trip Flux’s final level for eight hours straight, glued to my couch until I achieved victory. After spending such an extensive time about the game I began to realize what Bit.Trip Flux actually was. Upon deeper examination, I found something much more intricate than a rehash of Bit.Trip Beat in reverse.

Behind the retro visuals and chiptune soundtrack Gaijin Games has woven a subtle narrative surrounding series protagonist, Commander Video. The plot is ethereal in nature, laid on so thin that only players actually looking for the story behind the games will be able to find it. Commander Video, having died in Bit.Trip Fate, now looks back on everything that has happened, everything he’s done, everything we have experienced in the Bit.Trip series. Bit.Trip Flux is but a moment, the time between life and what lies beyond. All that Command Video has ever done is condensed into a matter of moments as he slips away from this world, a time for reflection of the entire journey.

Bit.Trip Beat symbolized the time before birth, a time when Commander Video having his entire life to look forward to. The tables have turned, explaining exactly why Bit.Trip Flux is Bit.Trip Beat in reverse. Now in death, Commander Video has nothing left to look forward to, no life left to live, only memories of the past. It is fitting then that Bit.Trip Flux does nothing particularly new, instead acting as more of a highlight reel or “Greatest Hits” of the series 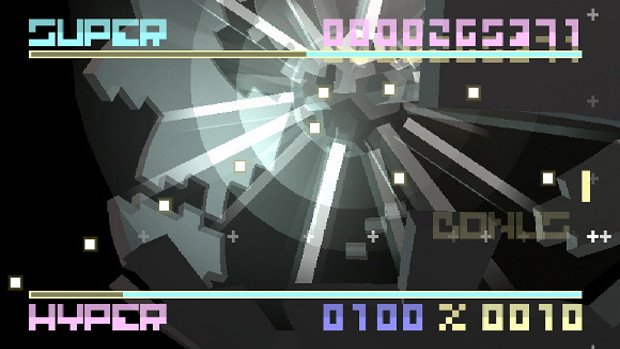 While Bit.Trip Flux most closely resembles Bit.Trip Beat, in truth all of its predecessors play a role in shaping the experience. Whether it was a dash of bullet hell gameplay or even just simple things like checkpoints, playing the game for the first time there were a thousand “A ha!” moments as I recognized something from a previous game that was blended seamlessly into the Beat formula.

In its entirety, the Bit.Trip series has one of the best soundtracks in recent memory. Even separate from the game they’re something I frequently enjoy, allowing me to relive Commander Video’s journey even when I’m away from my Wii. The fact that the Bit.Trip games feature such strong soundtracks has been a main draw for the series, but no title more so than the series’ epic conclusion.

In that “Greatest Hits” fashion, Bit.Trip Flux’s soundtrack is composed of remixed, beautifully blended versions of Gaijin Games and their chiptune artist companions’ previous work. It’s an incredible thing to hear a few measures of a song only to get a rush of nostalgia for a game that is barely a couple years old. Being able to experience the Bit.Trip series all over again in a single package is Bit.Trip Flux’s main draw. The title is so wonderfully familiar, yet completely unique at the same time. It’s this beautifully reflective narrative and self referential fan service that hardcore Gaijin enthusiasts will absolutely eat up, endearing the game and the series as a whole into our hearts.