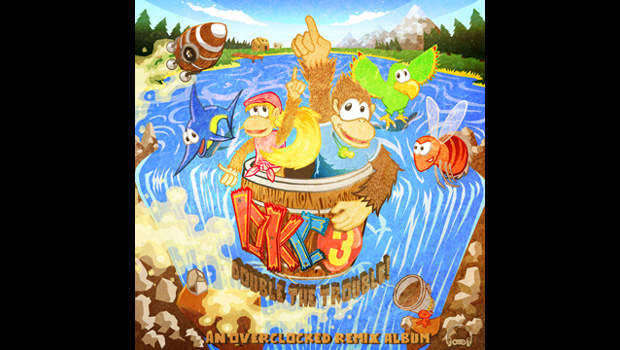 Largest OCR album yet, covers both SNES and GBA OSTs

I remember when OverClocked ReMix started producing full arrange albums nearly a decade ago. The second official release was 2004’s Kong in Concert, a tribute to the SNES classic Donkey Kong Country. It clearly shows it’s age, and all the contributing artists have since honed their skills immensely. Still, it remains on my music rotation to this day.

Now the trilogy is complete. Donkey Kong Country 3: Double the Trouble! is manages to dethrone Maverick Rising as the biggest OCR album to date, clocking in at 77 tracks from 69 artists across five discs at five-and-a-half hours in length. It covers not only the Super Nintendo tunes but also the radically different Game Boy Advance soundtrack. Even series composers David Wise and Robin Beanland offer up an arrangement of their own!

The time is “ripe.” Get it? Don’t look at me like that. Just… just go download the damn thing, foo’.