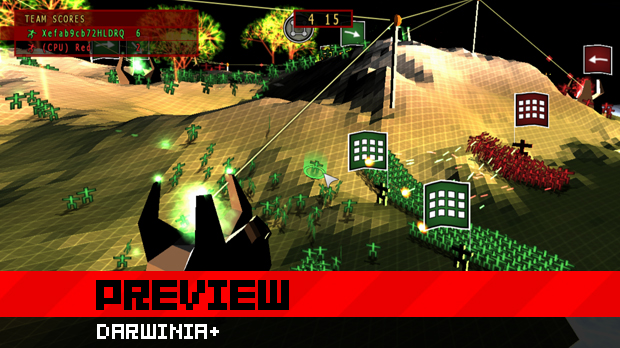 The life and times of an indie developer can be a tough one. For every celebrated and commercial success from the indie sphere, there are developers who slave and toil over their creation, well aware of the risk they are taking.

That, arguably, has been the case with developer Introversion Software. The London-based creators of the well-received Darwinia were on cloud nine with the 2005 release of that game. Offered a chance to port the game to XBLA, they figured it would be a quick and painless process to make the transition, taking only a year. Unfortunately, that proved to not be the case, and four years later, that promised port, Darwinia+, is almost ready to make it to XBLA. Having been shown the game, it’s obvious that blood, sweat and tears laid the foundation for Darwinia+, and to finally see it ready for release is good to find. Now how does it play? Follow to find out.

Darwinia+ is actually two games in one: Darwinia and Multiwinia. While both games can be downloaded today on Steam, they have been updated to better suit the needs of an XBLA title. The tutorial has been beefed up to better introduce new players to the game, some units that were formerly point-controlled are now directly controlled, and the overall game has been tightened for XBLA. There are some neat graphical effects at play besides the bizarre retro style, such as ZX Spectrum-style loading screens and other intentional graphical “bugs.” It’s purposely designed to look like an ’80s game, and in that respect, it succeeds. More on that later.

Darwina+, in both of its modes, can be simply reduced to the RTS genre. Players will be ordering units around, such as the Death Squads and the Darwinians themselves, to deal with the encroaching virus (or in Multiwinia, each other). There is not really a question on whether the gameplay of Darwinia+ is good or bad, as the plethora of awards for the game speaks to its quality. However, I am a little interested in how the control stick method, over a computer mouse, will stand up. From what I was shown, however, it doesn’t look to be a problem.

The story of the Darwinia side of Darwinia+ is about an evil scientist named Dr. Sepulveda, and his creation: a computer that has built little entities called Darwinians that live with souls and self-awareness. Sentient Digital Lifeforms, he calls them. Sepulveda attempts to guard them, but unfortunately, the Darwinians have been decimated by computer viruses. It is up to the player to use their directly controlled “Death Squads” to retrieve and salvage the Darwinian people.

By playing the game, players will be introduced to the religious zeal of the Darwinians and the post-mortem resting place of their souls. The Darwinia side of Darwinia+ is decidedly…spiritual, and the creators of the game, Chris Delay, John Knottenbelt and Mark Morris, have designed it that way. Everything has a symbolic meaning, and every death of these flat, people-shaped blocks is treated as a serious tragedy.

Multiwinia, in contrast, is the multiplayer element of the game. The history behind Multiwinia is in itself a story, as it is the by-product of porting Darwinia for the Xbox 360. While working on porting Darwinia, the developers wanted to make a multiplayer mode, and having completed this element, released it as a sequel to Darwinia in 2008.

Now that it is united in one game with its single-player partner, Multiwinia is thematically different. Taking place generations after the original Darwinia, Multiwinia is about a militarized population of these flat little guys, and the gameplay is now much more aggressive and faster. With up to four teams, leader units, resource points, and power-ups, Multiwinia is much more of an RTS game than its partner.

There are six different modes in multiplayer. Capture the Statue is a mode in which the teams compete to capture statues (often with references to other games and retro elements, such as a companion cube) and bring them back to the base. King of the Hill requires players to take control of certain points for a certain amount of time, and Rocket Race is a competition to control solar panels to electrify pumps that will force fuel into a rocket to allow the Darwinians to escape.

Blitzkrieg is a mode where you capture flags and steal enemy flags, Domination has teams fighting over spawn points, and Assault is a mode where one team defends a bomb and the other strive to destroy it. Yeah, they are all pretty standard with regards to RTS games, but why mess with what works?

The most striking element of the game has to be the graphics. Like I said, it’s designed to look like an old-school 3D game, and this goes all the way to the vector lines. I wouldn’t go so far as to say the game is pretty, but that’s not the point. Graphically, it’s designed to evoke a retro feeling that is very stylized. It’s not going to appeal to everyone, but I’ll let the screenshots do the talking.

Darwinia+ is also one of the newest XBLA games to support avatar awards, with t-shirts for your avatar once you complete objectives.

It’s been a long time coming, but Darwinia+ is finally about to make it. What it looks like our friends at Introversion Software have created is a much more polished and accessible version of their flagship title. With a solid amount of features, and gameplay that is arguably worth two games, it’s nice to see this Director’s Cut title coming to Xbox Live.