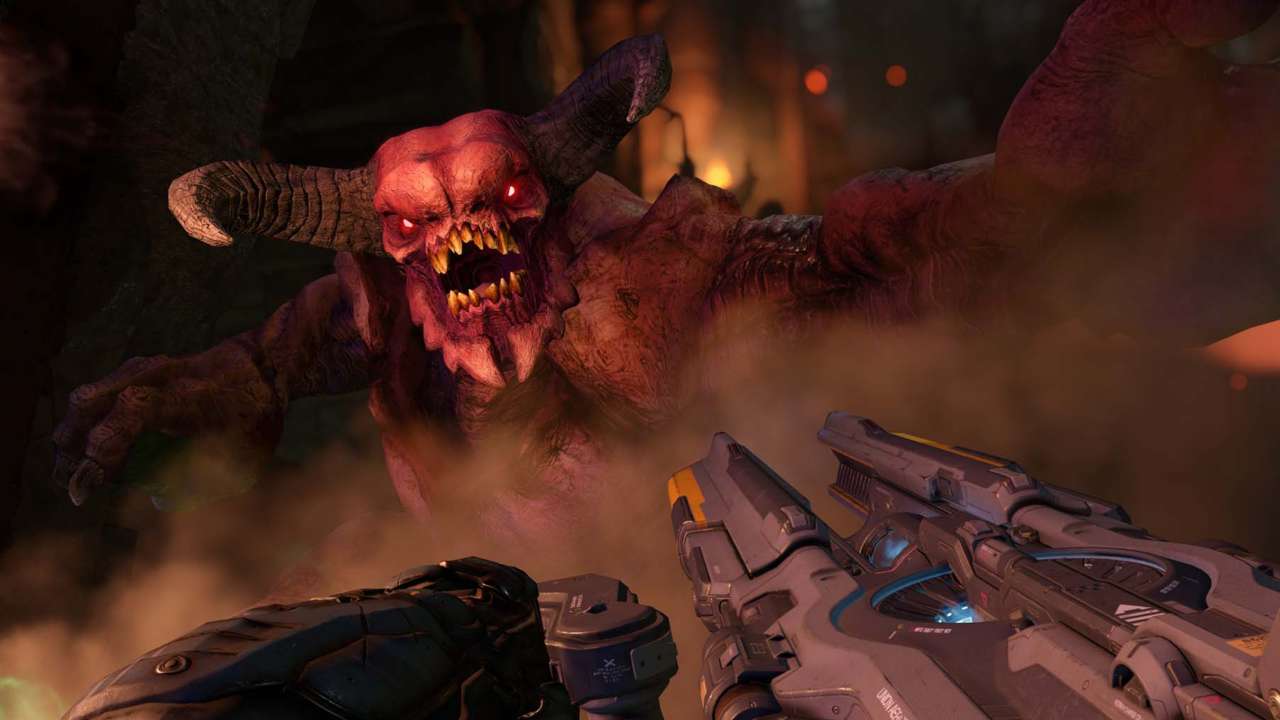 Rip and Tear without limits!

Doom is a really solid shooter. It evokes old-school level design with an emphasis on all-out action and not a lot in the way of fluff. The story definitely draws too much attention towards the end, but the game has a breakneck pace that hasn’t been seen in a lot of modern games, shooter or not.

The recent update to Doom fixes one of my main complaints with the main campaign, namely that you don’t need to find upgrades. Now, I understand that searching the environment for any manner of secrets isn’t a required option, but Doom went out of its way to make those collectibles important.

Challenges were tied to upgrade points, hidden spots contained armor, health, and ammo upgrades, and getting every bobble head gave you even more upgrade points, letting you max out your weapons in an insanely fast manner. Even the relic challenges, which were cool in a God of War kind of bonus way, were hidden somewhere in each level. It was a bit exhausting.

I could explain how detrimental those extra items ended up being for me, but a video by YouTuber Super Bunnyhop encapsulates exactly what I felt while playing through Doom. I wish I could shut my brain off and just focus on the action, but the idea of getting my ass kicked for reasons beyond my control makes me anxious.

Thankfully, the new Arcade Mode update does away with any needless padding or secret finding. The story still rears its ugly head, but now you can just blast through enemies and the game rewards you for quickly dispatching foes. You start each level with your weapons fully upgraded and all of the runes unlocked.

Now, your main focus is navigating to each objective and focusing purely on the combat. It gets right to the good bit of Doom while skipping most of the negative aspects of the game’s design. I mean, I enjoyed trekking through every nook and cranny finding tangible upgrades, but the original Doom never focused on the secrets.

Those secrets had a short-term benefit and made the player feel good, but they weren’t necessary to finishing any part of the level. Since the HUD in 2016’s Doom puts an emphasis on the hidden objects, they don’t feel like goodies for more spatially aware players; they end up becoming the game.

So color me surprised, but going through the Arcade Mode, I found out that the level design is actually non-linear. In the third level, you can tackle the objectives in any order you want and each area loops back around to a sort of central hub. It becomes a believable playground that doesn’t needlessly guide the player like a modern Call of Duty campaign.

Giving out medals for specific kills that the player can do also has you experimenting with different weapon mods and glory kills instead of just falling back on reliable methods of disposing of enemies. Not drawing out each encounter with secret searching improves the experience by zeroing in on all of the best aspects of Doom.

I’m almost inclined to tell any new players to just skip the regular campaign and go straight for Arcade Mode, but since both modes represent Doom in totally different lights, it’s nice to look at the campaign as a bonus with Arcade showcasing how to do a Serious Sam-style game with modern production values.

Whatever you choose to do, playing Doom is a reward in and of itself. Missing out on this game if you have any kind of interest in it is criminal. This is exactly the kind of thing that old-school gamers have been pining for. It also reminds me of an idea I had with some of my older friends, which we called, “Shut Up and Die!”

After finishing the main campaign from the original release, SnapMap added a lot of variety by allowing gamers to create their own levels. It wasn’t the most robust editor around (or even the easiest), but having a limitless supply of levels of varying genres and being shared between platforms is awesome.

While none of the user-published levels will exhibit the level of polish that the campaign features, they give you another excuse to shoot things in different environments. There are even guns that are exclusive to SnapMap and emulate things from Quake and Halo. Heck, I played through a remake of Halo’s first level while checking out this update. With the Arcade update, SnapMap got a bit better.

Arcade Mode added pieces from classic Doom, so now you can get to remaking the entirety of Doom or Doom II within Doom; Doomception, I guess. Id Software has even created a mini campaign within SnapMap that features reworked versions of Doom’s first three levels. The purist in me was aggravated at the corridors not being exact copies, but all of the classic sound effects are carried over and the weapons feel more like their classic counterparts than the new game’s take on them.

Having the option to make mini campaigns for custom levels is also something I wanted to see from SnapMap’s inception. When I get on a roll with level editors, I tend to craft out entire villages or multilayered playgrounds that all connect to each other. Now that I can emulate something similar to Half-Life, I might just spend time with SnapMap.

About the only downside to the Arcade Mode update is that the Trophies/Achievements are ridiculously easy. You’d think with a system that has Gold medals as the maximum reward, tasking players with getting all Gold would be on the docket. Instead, you can fire up one of the later campaign levels and bang out the three Achievements in 15 minutes.

As for the multiplayer updates, does that even matter? I never purchased the previous DLC pack, but I was struggling to find online matches that weren’t team deathmatch before this update. Now, the free-for-all mode seems to be the new king. I guess that is fine, but Doom’s multiplayer misses the point of the campaign.

Still, as a free update to a modern classic, Arcade Mode is definitely worth playing. I think it is the ideal way to experience Doom, but having it as a bonus feature in an already feature-dense game just makes the whole package that much more enticing. Now, ripping and tearing is even more cathartic.