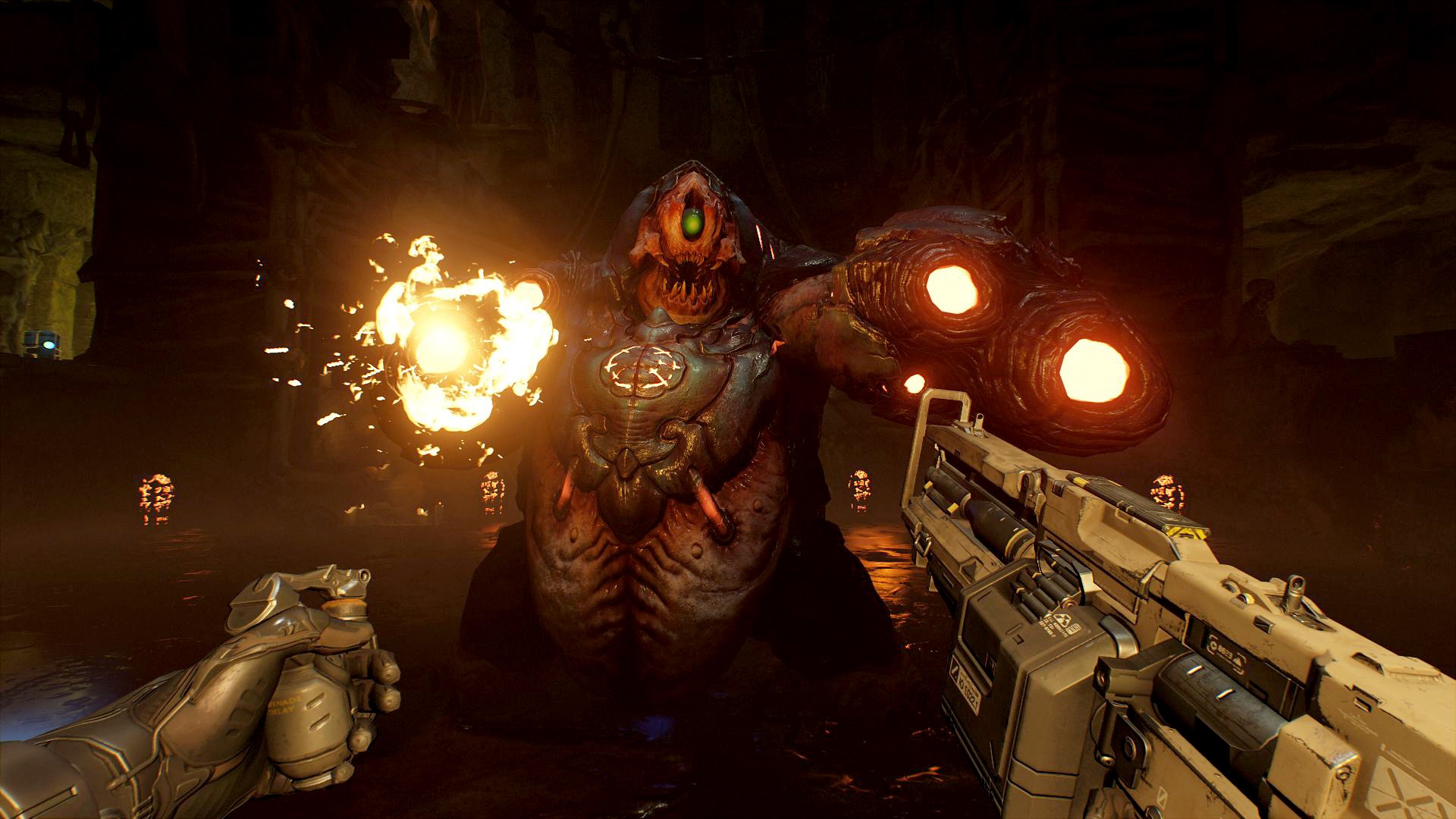 I like to gush about how good I think Doom 2016 is. Some naysayers on the sidelines like to point out its flaws, and I respect that; nothing is perfect, and I could write a doctorate on the fundamental differences between new and old Doom and why I still believe the original is a superior game. But sitting down with a remake/sequel/whatever decades after the original came out and saying aloud, “holy shit, they didn’t fuck this up” is as remarkable achievement as any, and I’ll be playing it long after people have forgotten it exists – if the developers let us forget, since it will likely be re-released eight hundred times, a trend which is already apparently beginning.

Being a bit of a VR advocate and loving Doom meant I was pretty excited to see how Doom VFR would turn out. So it’s utterly disappointing to me that I have to be writing this now with borderline annoyed negativity, because for me personally, Doom VFR is a let down. There may be a decent experience there. It might be as good a transition to VR as is possible. But for the first time ever playing a game on the HTC Vive, I experienced all of the negative effects people complain about – including crippling, shock-like nausea which cut my total play time down to under a single miserable, unplayable hour.

Now keep in mind, I tried to play Doom two different ways. One by moving around with the traditional controller setup, and one by ignoring the full locomotion functionality altogether and simply teleporting and dashing around the map. I recognize that full locomotion can cause problems, thus the teleport mechanic existing in the first place, but even fully embracing that made my stomach turn.

This is of course extremely subjective, and if you are particularly resistant to fast motion in VR, I wouldn’t worry about it – you can ignore what I say about this particular element of my experience altogether. I could not personally find a configuration for the game that didn’t send a hot tingle up my spine and make me feel like I was going to pass out, and my friend who loaned me his Vive for the experience reported a similar level of discomfort. But I am seeing a lot of reviews and impressions where people were perfectly fine with it.

All that being said, my limited time in the Doom VFR world brought a couple of issues up to the forefront, the main one being that this just doesn’t feel like a Doom game to me, at least initially. The trappings are there; the familiar environments and enemies which look beautiful rendered on a 1080 Ti video card regardless of tiny Vive screens. They didn’t feel quite to scale in a way I can’t properly describe. I have played other games on the Vive where enemies felt gigantic, as though they were in the room with me, and were incredibly intimidating to behold. The first time a bull demon ran in my general direction I jumped a bit, and that was officially the end of my terror for the duration of the rest of my play. It’s weird that your in-game hands feel connected to your fucking mouth like the pinchers of a beetle.

This isn’t a major complaint or anything. The appeal of Doom has never been pants-shitting fear for me, and frankly I was glad I felt at least a tad disconnected with the world. My heart still jumps when playing the original and a Baron of Hell greets me with a howl despite the otherwise now-primitive look of Doom, so I don’t have a strong heart for video game fear. The new one doesn’t give you any time for it anyways; you need to be constantly on the move and in the face of your enemy to survive. While Doom VFR recognizes this, the wind is taken out of its sails a bit during the boring tutorial portion which removes the subversive commentary of middle finger to typical narratives in favor of a more user-friendly and familiar initial hand-holding session.

I recognize that a tutorial really needs to be here in order to learn the ropes, but it cheapens the simplicity of Doom and lends it an immediately awkward tone that dissipates quickly in favor of a more straightforward campaign. I still really despise the teleportation thing. I get the need for it, especially after forgetting to bring my barf bag to Doom VFR, but I don’t think I’ll ever feel comfortable with the frustrating, limiting static nature of it. Whatever I liked about Doom 2016 is not accurately represented here, and I was questioning why anyone would ever prefer playing Doom VFR over its predecessor despite the novelty of VR which, if this is all the technology is going to have to offer in the future, has quickly diminishing returns for me personally insofar as how it has been dealt with up to this point.

Anything that has you in the cockpit of a vehicle works great on the Vive. Point-and-click adventure style games work beautifully. The sorts of games where you can look around and take in virtual vistas, or hear pounding visual mind-fucks such as Polybius. I think VR has massive merit among particular genres and styles of gameplay, but as a forever Doom fan and supporter of VR, I don’t think the technology is refined enough yet to deal with more or less direct translations of the current sorts of popular experiences most gamers are accustomed to.

But you know what they say, opinions are like Joel Petersons; they’re assholes. So if you had interest in it, don’t let me stop you. It was a flaccid experience for me that I couldn’t enjoy since I was so busy trying to prevent my intestines from shooting out of my mouth, but I still have faith in the potential of VR for now, and am trying to remain optimistic for the future. However, Doom VFR did little else but to make me sick about the whole experience.

I’m frustrated having to write this, because I have imagined playing a game like this in VR my whole life. And it tells me that VR either isn’t working to its full potential yet, or that I am a defective man-baby.

I mean the latter is true regardless, I guess. I’m just pissed that I didn’t have a good time ripping and tearing into Doom VFR. Better luck next time.