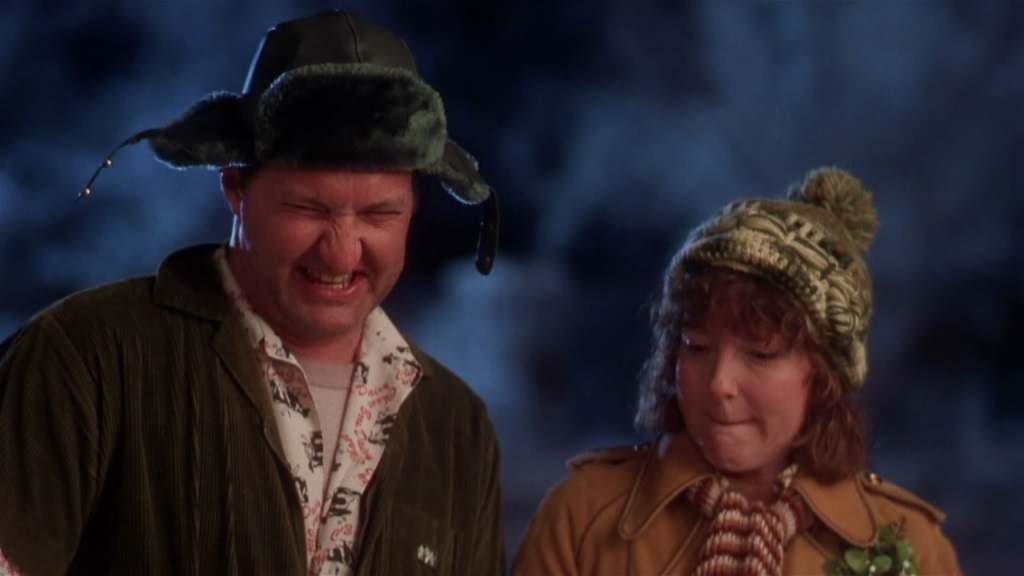 Out of nowhere, a three hundred pound man in an Avengers t-shirt barrels through the crowd, stomping on a child who falls to the ground clutching a Steam gift card between rigor-mortis frozen fingers.

An old man is pushed violently under a shelf, and is torn to pieces by the starving hordes who mercilessly tear apart a skid of Hatchimals, one proudly standing atop the scattered remains of his body, letting out a hellish warcry while holding his skull and spine, still connected. In the washroom, a man buries his head in a urinal and sobs while three more gang beat a teen in the bathroom stall for blu-ray collector set of the Star Wars prequels. A woman uses a broken GTA V disc to slice the throat of her best friend who was reaching for the last Google Home.

Her eyes are filled with hatred as she falls to the ground and bleeds out before being quietly shuffled into a corner. A solemn woman with pronounced cheekbones and dark circles beneath her eyes, a strand of greasy black hair hanging in front of her face, stands atop a check out counter, a bible held betwixt sweating hands, and screams psalms from at the top of her lungs, as the gathering masses bow to a burning effigy of Razer gaming mice, facing North at the front of the store while chanting “WUBBALUBBADUBDUB”.

The holidays are upon us. The end of reason is nigh. The madness of the retail hellscape cometh, and very soon on a boxing day morning, Nietzsche’s cry of “God is dead” will echo in our collective memories as reluctant, pained Best Buy employees everywhere are forced to clap in unison as the desperate, teeming, hate filled masses storm the bloody gates to try and get good deals on video games and video game accessories. 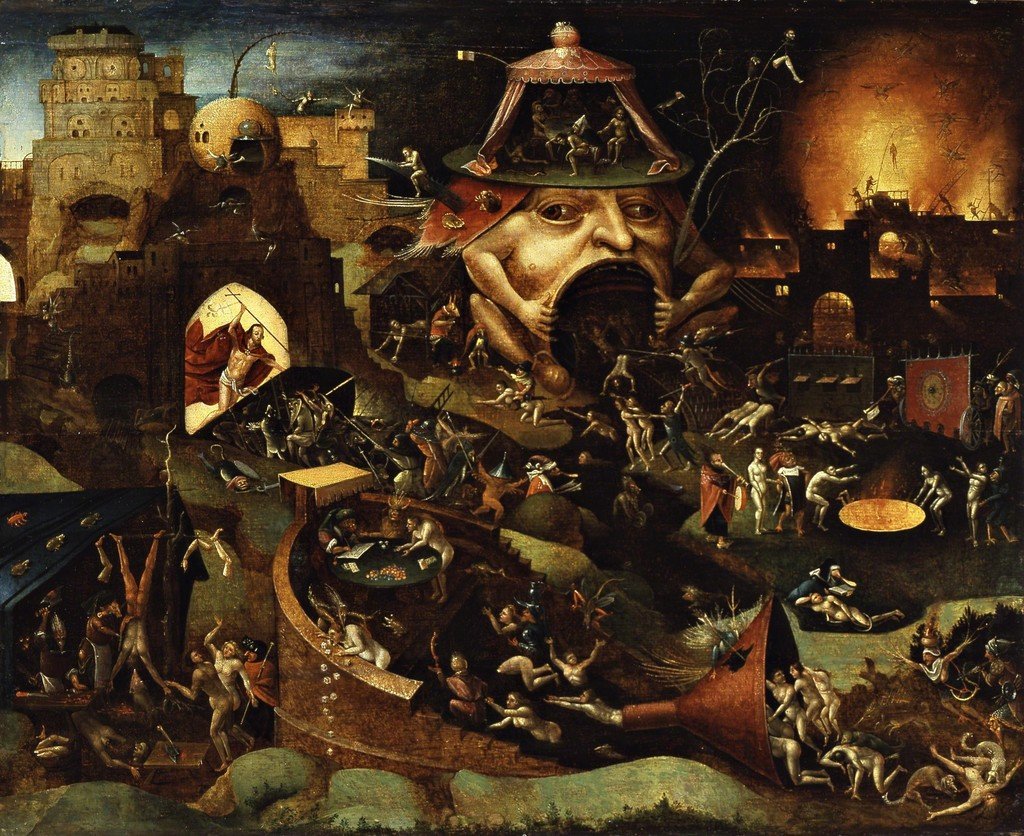 But there is no need for all of this. Because the best game ever to be made has already come. You don’t need to go out there. This game has come, had its time, and is now experiencing new life on the Nintendo Switch. Stay home this holiday; nothing else needs to be said. Beethoven has already written the finest symphonies to ever be composed. And id Software has already made the beginning and the end of all video games; the alpha and omega, the proverbial magnum opus of the medium.

Doom 2016 exists. So why the fuck bother? Why do anything else ever again, go anywhere, or see anyone?

Now look, I am not here to stir up controversy, ruffle feathers, get under anyone’s skin, or crawl up the trunk of the elephant and tickle it with a feather until it snorts so hard that I am inside of it, forever. Inside of it and looking at its stomach walls, so warm and red and comforting. Oh no, I wouldn’t ever want to do that. I am a far more subtle man. And I don’t like to judge people. It just isn’t in my nature.

But Doom is obviously the best video game and if anyone disagrees they are not only wrong factually, but also ethically. I don’t want to say that they are committing a felony; but I mean, look into it. Find their names. Check out their background. Because you never know.

It wouldn’t be surprising, that’s all I’m saying here. 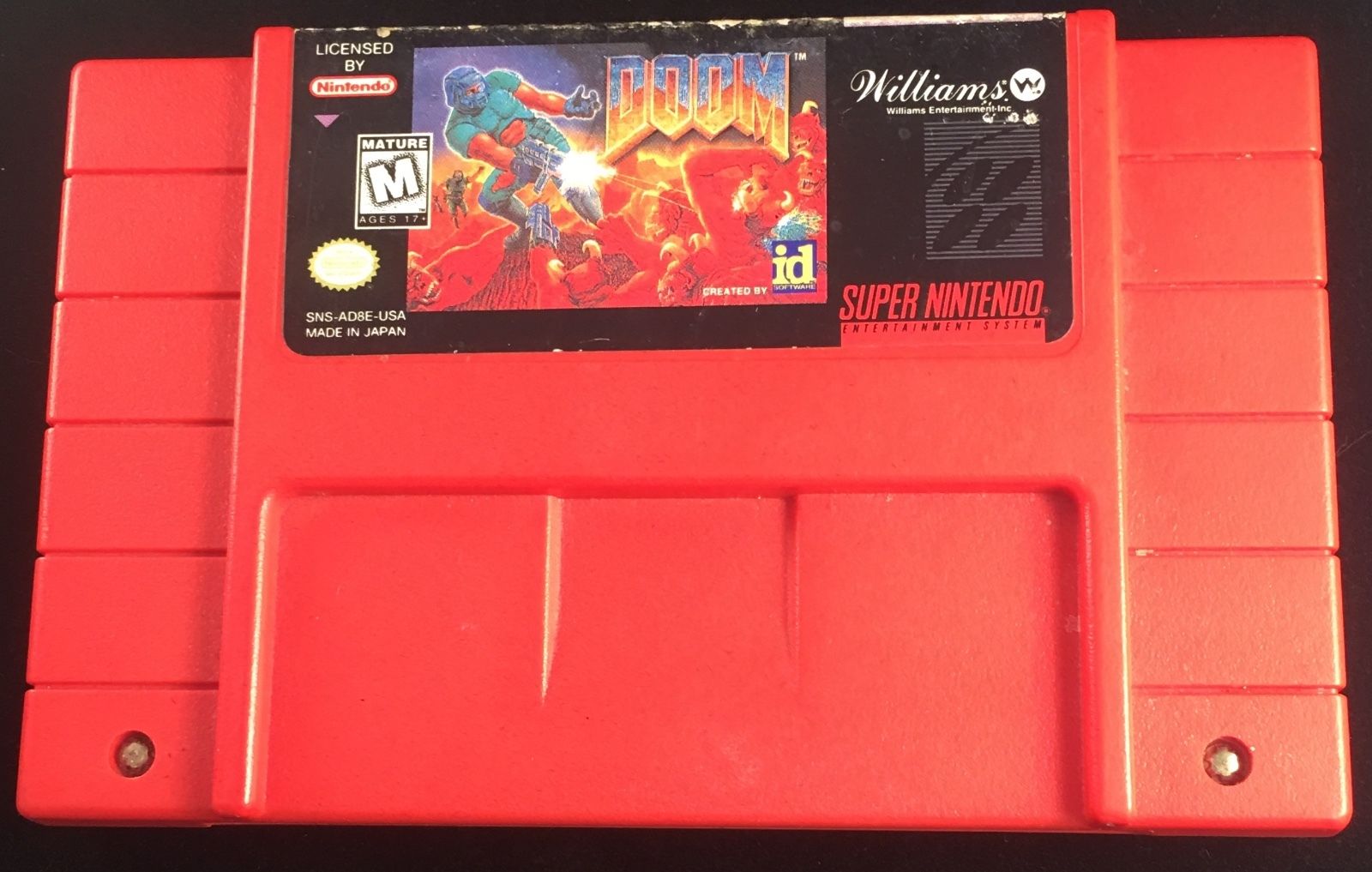 I guess you could say that I am a fan of the Doom series as a whole. Go ahead, say it. Try it on for size. Feels right doesn’t it? It should because it’s true. I even liked the third one. I nearly shit my pants playing it the first time (fear and burritos), and had to wait until Xbox before I got a chance to get through it proper, but it was a treat. I play the first one frequently still to this day.

And one harrowing, dismal morning, I nearly beat the entire thing on the Super Nintendo at my cousin’s place. Everyone wanted to vomit and kill themselves by the end. but not me. I merely wanted to inflict egregious, eventually fatal self-harm at its horribly pixelated, sluggish interpretation of the original. And I did, and I am dead now, and writing to you…from beyond the grave.

At first I was very sceptical of new Doom. It looked like a big monster arena shit show, and I was nervous. I wanted wacky level design, big open areas, clever enemy placement. I did not get most of those things in the way I had envisioned, but still walked away from the Doom 2016 experience feeling elated. What the fuck just happened? Did I really just play a new, good Doom game at the very end of the fall of western civilization? Where are my keys? Why do I have a missed message on my phone? Dad, is mom okay?

It raised a lot of questions. Unquestionably, the game was a rather large departure from the horror elements Doom 3 was pushing, but also didn’t feel like an emulation of the original. All throughout my play of the campaign I was criticizing and dissecting it. But of course that didn’t stop me from blowing through it all in a couple of days and have a lot of fun doing it. 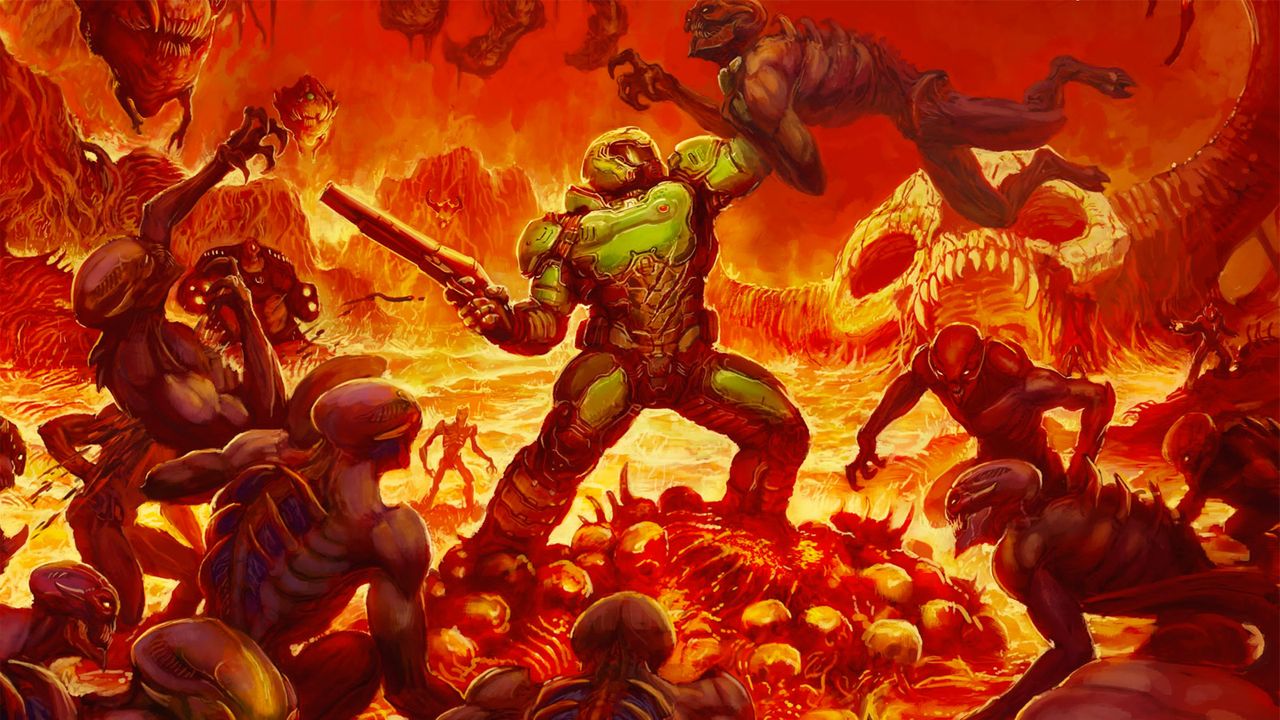 The multiplayer initially felt pretty tacked on. I do play it occasionally because why not? I dig that it’s so simple. In a climate where online games are becoming increasingly more complex (and for the better in a lot of ways) it is nice to have the option to run around a map like a fucking dork with a rocket launcher and mindlessly blow up other nobodies playing Doom instead of something better. But the real draw was the single player campaign, which is a set of words I hate using in the body of an article about Doom because it shouldn’t even have to be stated – that IS Doom, that is the only part of Doom that they really needed to get right to satisfy most fans, and they did a great job, with some minor caveats.

The community for the original Doom and Doom II is absolutely dripping with custom content made over the last twenty five years. It is what keeps the blood flowing to those games today and still makes them worth a look even if you have already dominated all the original content. SnapMap was an admirable effort to put control into the hands of players, but it would have been a real treat if we could have seen original development tools released to the public.

There is some crazy shit out there to be found, including full conversion mods to completely change the Doom experience. Games feel like such a disposable experience much of the time. Once the DLC content and season pass stuff is over, most games are effectively in limbo. I say, when it gets to that point, why not open things up a bit for curious modders to explore?

It’s a good thing Doom was so damn good. And the fact that it’s been over a year and I’m still enjoying it, have run through it several times, and don’t find it getting long in the tooth is impressive for a game was completely hesitant about to begin with. If they do a sequel, when they do a sequel, I want to see them ramp things up in the way ID originally did for Doom II. 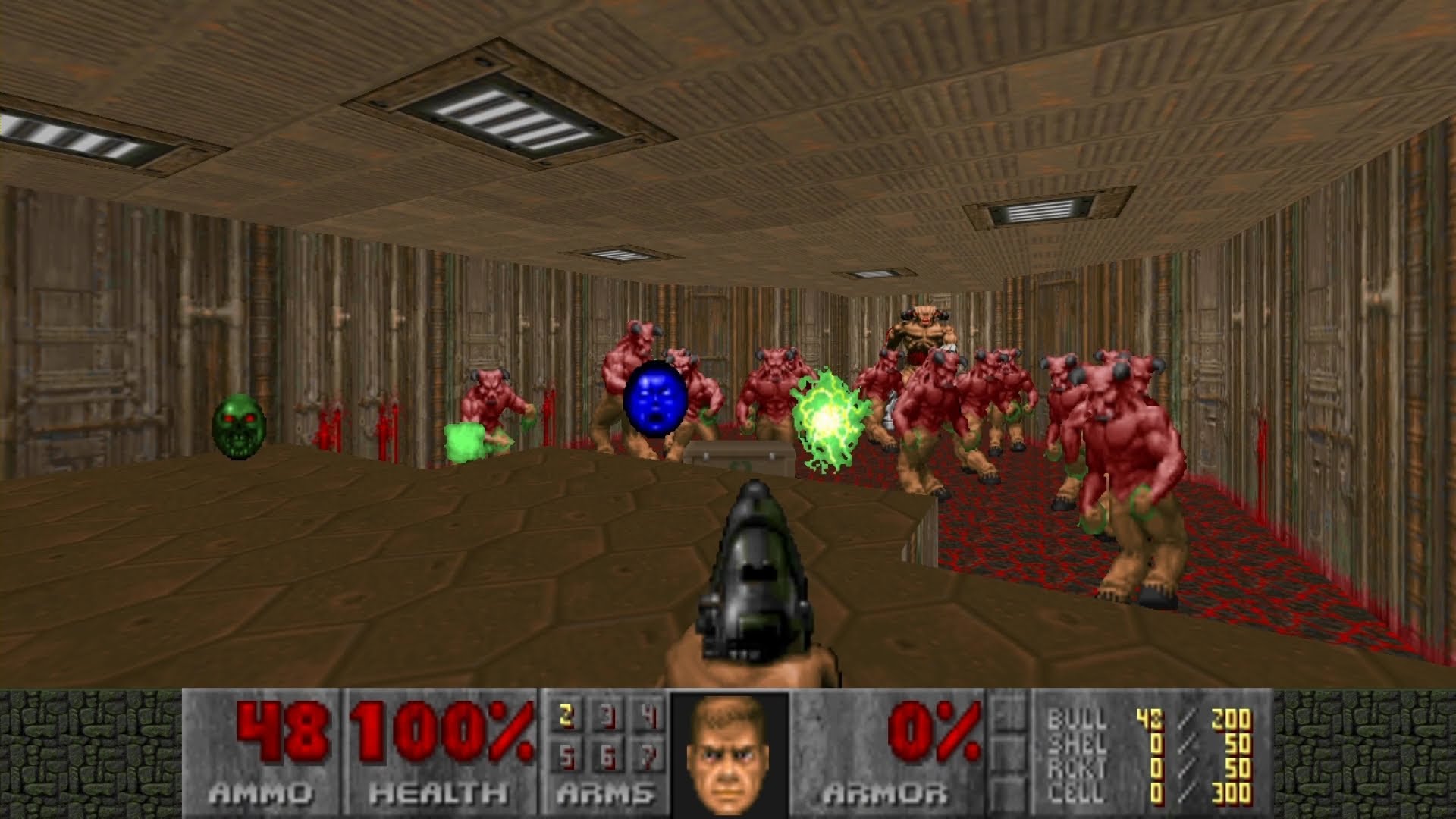 Bring us apeshit level design, boss monsters as regular enemies, a venerable shitshow of a fragfest sandbox we can play around in to our hearts content. The subversive way they treated the story as being disposable in Doom 2016 was perfect, with the Doomslayer outright not giving a fuck about anything but kicking demon ass. Play with that concept, send the Doomslayer to a demented, backwards, demon impregnated Earth where anything is possible. And give us more puzzles, traps, and complex unique levels to work through.

The personality is there. The industrial metal soundtrack, the quirky and fun demons and death animations who feel like characters all their own and not just generic fodder to be put to rest, the vibrant color palette, the speed and the chaos of it all, and of course an extremely satisfying arsenal of punchy weapons to get the job done. I just want to see the level design evolve a bit more. I don’t want to be lost for decades in a level looking for a hidden door or key, but a little challenge for the old chrome dome would be nice.

But all that said, even if we get a banal sequel that treads the same path of its predecessor, I can stand proudly and say, “In 2016, I only shit my pants one time when I had the flu. But I also played one of the best games made in a decade, from a “AAA” developer no less which managed to take what I like about the original and amplify every element of it. And if it’s the last “AAA” game I ever buy, I will be satisfied.”

A year and a half later, and Doom is still one of the greatest experiences I’ve had where probably half the other games I have bought or tried were quickly forgotten. It is an impressive achievement, and even though I can’t wait to see what they manage next, Doom remains the gift that keeps on giving.