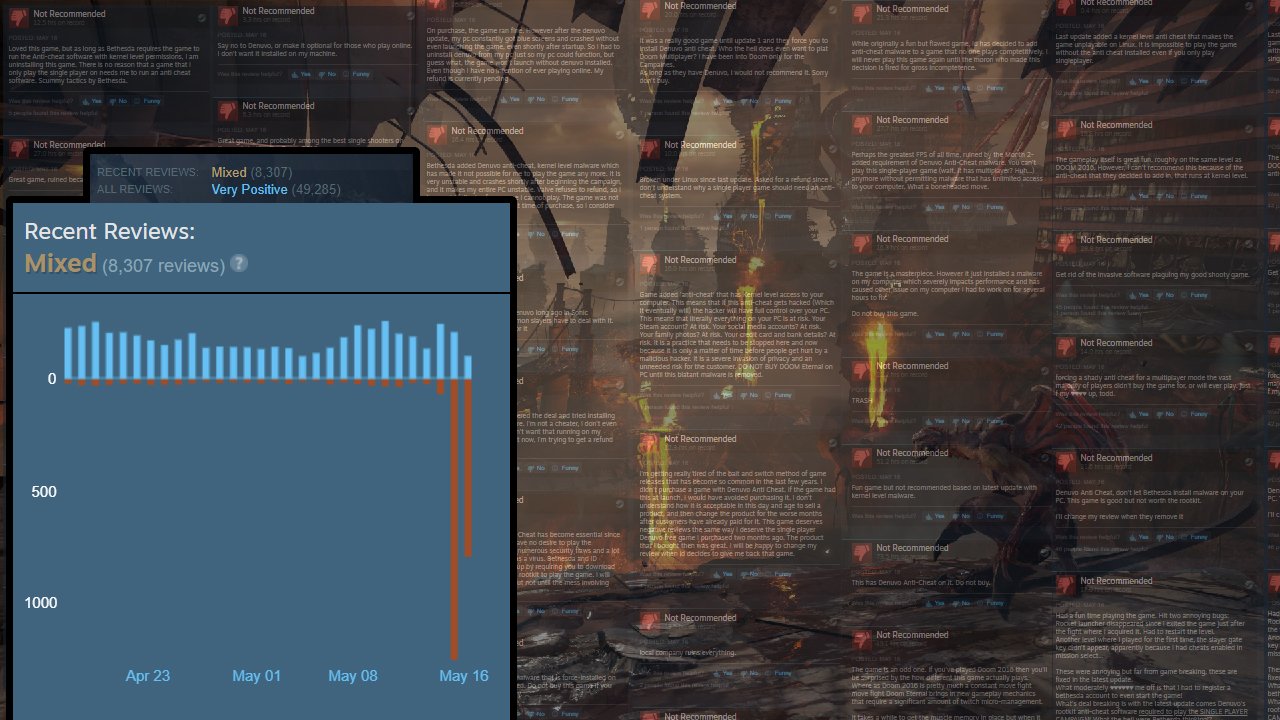 How to lose players and alienate your fans

[Update: I reached out to Denuvo, and a representative confirmed an update is in the works to allow the game “to be launched for singleplayer offline play without requiring installation of Denuvo Anti-Cheat.” They were unable to provide a timeline for this patch, as it is not in their direct control. The full response is provided at the end of this story.]

Doom Eternal is a great game. Having played through it recently myself, I’ve been considering going back for some Ultra Nightmare runs and maybe (but probably not) playing more of the weird asymmetrical multiplayer mode.

Well, now I’m not so sure either of those will happen.

In what is listed as a “feature” on the official website, and described further in this wonderfully tone-deaf news post, Doom Eternal now boasts everyone’s favorite addition to a primarily-singleplayer experience: Denuvo Anti-Cheat. This third-party kernel-mode driver will start up and close with the Doom application, and can also be uninstalled at any point. But, according to users online, the game forces players to re-install it when booting up — even just to play the singleplayer campaign.

Doom Eternal‘s rating on Steam currently sits at “Mixed” for its recent reviews, while the rating for all reviews still stands at “Very Positive.” A cursory scan of all of the recent reviews shows almost all of them mentioning Denuvo by name, many even praising the game but mentioning that this recent update caused them to uninstall the game until the Anti-Cheat system is removed.

I also jumped over the Metacritic’s website, but it seems like that might be losing favor among players these days, as there are only 16 reviews of a zero or one since the Denuvo patch launched as of now. I’m sure that will catch up over time.

For those who have not played the game, other than the stellar singleplayer campaign, Doom Eternal features a multiplayer “Battlemode,” which pits one player as the Doomguy against two player-controlled monsters. All things considered it’s not the worst multiplayer mode I’ve ever played, but it also didn’t hold the attention of my friends and I for more than a few rounds when we played.

I don’t know how rampant cheating was in this mode, but clearly id and Bethesda have chosen poorly with the direction they chose to pursue here. It could also have to do with the fact that everything is tied to a weird battlepass thing that unlocks skins for guns, demons, and Doomguy that probably no one asked for. So if people are cheating in multiplayer and farming experience, that breaks the whole forced “progression” aspect that feels so out of place in a Doom game to begin with.

It will be interesting to see how (or if?) the developers and/or publisher respond here. Doom Eternal has story DLC in the works, and my guess is this update is not exactly going to boost player excitement.

Here is the response from Denuvo:

“The team is working on allowing DOOM: Eternal to be launched for singleplayer offline play without requiring installation of Denuvo Anti-Cheat. Our motivation is to support users of Valve’s Proton and gamers playing on platforms without administrative access to their machines, such as at work or school. This feature would also be an excellent tool for putting rumors to rest that Denuvo Anti-Cheat has any measurable, let alone perceivable, performance impact via A/B benchmarking.

I’m unable to provide a timeline as it is beyond our control.”