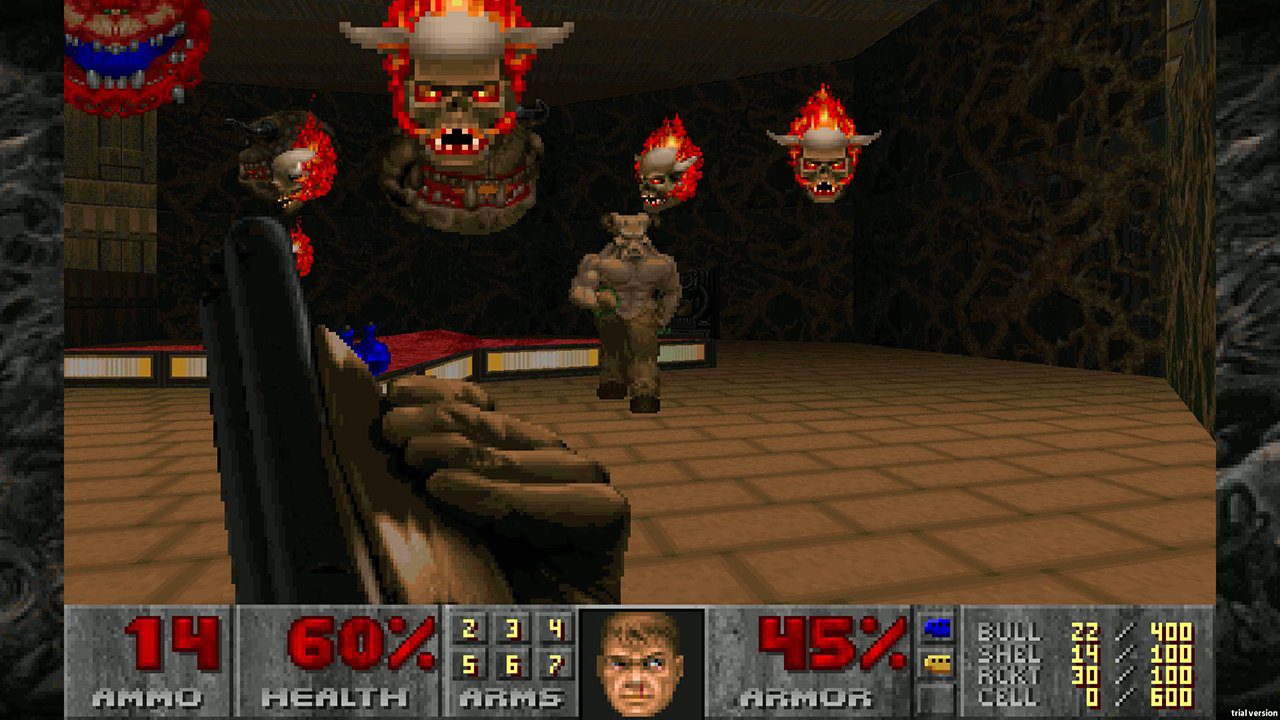 Another win for options

While the trio of Doom games were in rough shape on Switch when they first arrived (yikes, Bethesda logins!), that lunacy has been patched out, and Bethesda has continued to patch the series. This time around, we’re getting a hefty update for Doom and Doom II.

All versions now have access to the community mod BTSX Episodes 1 and 2, Nightmare mode “has been restored” to make enemies twice as fast, widescreen rendering support is in, a crosshair can be enabled for more precise aiming, just like the original and a ton of bugs have been squashed.

In an interesting turn of events, the iOS port is getting a new touch scheme and controller support, but more importantly, the PC/Switch/PS4 editions are getting gyro aiming. Bethesda calls it an “additional amount of precision,” and you can either set it to the controller’s pitch or yaw. Or, you can turn it off. Bethesda notes that on PC, the only way to currently use gyro aiming is to hook up a DualShock 4.

For the first time in an official port, the original DOOM renderer has been modified to natively render 16:9 without any letterboxing. The FOV has been increased to reveal more image on the side instead of chopping off the top and bottom. All new 16:9 versions of the titlescreen, intermission, and ending screens have been added. Many of our Add-Ons have also had widescreen support added, so download the latest version from the Add-Ons listing to check it out!

The engine now can load DeHackEd patches, a popular tool for the original release that modified the game in order to support more advanced behavior. Add-Ons can now use new weapons, change enemy behavior, and more!

Split screen deathmatch has been changed to what is commonly known in the community as “Deathmatch 3.0.” Weapons will stay in the world after being picked up in order to account for the extreme lethality of DOOM’s weapons, and the weakness of the starting pistol, while all items and ammo respawn on a 30 second timer. Invulnerability and Invisibility will never respawn after being picked up for the first time.

A crosshair, which can be disabled in Gameplay Options, will also change colors when targeting an enemy. This means less guessing if firing a rocket is going to aim at the enemy above you, or fire directly into your face, bringing about an untimely death. Enabling the crosshair may also help reduce motion sickness by giving you a fixed point to focus on.

Gyro Aim, enabled by default, allows you to look left and right by either turning the controller, or rolling the controller left or right. This allows for an additional amount of precision by enabling fine corrections to turning in order to track moving enemies, while still using the right analog stick for large turning movements. Gyro Aim can be set to either use the controller’s yaw, or pitch, or disabled entirely, along with a separate sensitivity slider. Please note: On the PC version, Gyro Aiming is only supported when using a DualShock 4 controller.

A new, more precise touch control scheme has been implemented. The previous system that required gestures and double tapping has been changed in favor of onscreen buttons. Looking around while holding down the fire button lets you track enemies and fire during protracted encounters, while momentum on turning has been disabled for better precision and more predictable turns. A fire button has been added to both sides of the screen allowing you to better react to being unexpectedly hit from behind.

If touch controls aren’t your thing, we now support MFi controllers fully. PS4 and Xbox One controllers that are supported by iOS 13 will also now work for input and have the same controller mappings as all the other platforms.

A millisecond accurate timer has been added to the minimap, and to the end of level intermission, for anyone looking to speedrun levels.

iddqd, idkfa, idclip, and all of their friends can now be entered from the keyboard, in addition to the Cheats menu, as in the original 1993 release.

A message and notification is now displayed when you enter into a secret area for the first time.

Ultra-Violence+ is a twist on our existing Ultra-Violence skill level. Deathmatch/Co-op only weapons will spawn in, and enemies are fast like in Nightmare mode. In DOOM II, this means you get the BFG and Rocket Launcher right from the start, but in Final DOOM: Plutonia you’ll have a Spider Mastermind staring you down as soon as you spawn in on the first level. It cuts both ways.