This all feels so familiar. I’ve been here before but I can’t quite put my finger on it. Maybe if I look around a bit –really focus and think hard and try to shake the cobwebs off my brain — it’ll all come rushing back.

Oh yeah, I’ve seen this before just by a different name. First it was Max. Then Chloe. Then the Diaz brothers. I’m playing a Life is Strange game, but with a pulpier feel and less import given to teenage relationships. There’s no mistaking the Dontnod DNA though.

Twin Mirror will be instantly recognizable to Dontnod veterans. It’s a slick and natural evolution of the Life is Strange formula, but without the episodic structure to string things along. The plodding walking, the pull to examine absolutely everything, the stilted interactions and friendships forged — it’s all stuff that Twin Mirror excels at even though this is a murder mystery first and foremost.

Sam Higgs, a socially-cocooned investigative journalist, has come back to his West Virginia hometown (SHENANDOAH RIVER) to pay respects to his recently deceased friend and former coworker. It doesn’t go well. Higgs was run out of town after running a piece that led to the coal mine getting shut down. Mining towns aren’t good for much if they don’t have a mine. There aren’t a lot of smiling faces greeting Sam’s return to Basswood. One guy punches him in the face. 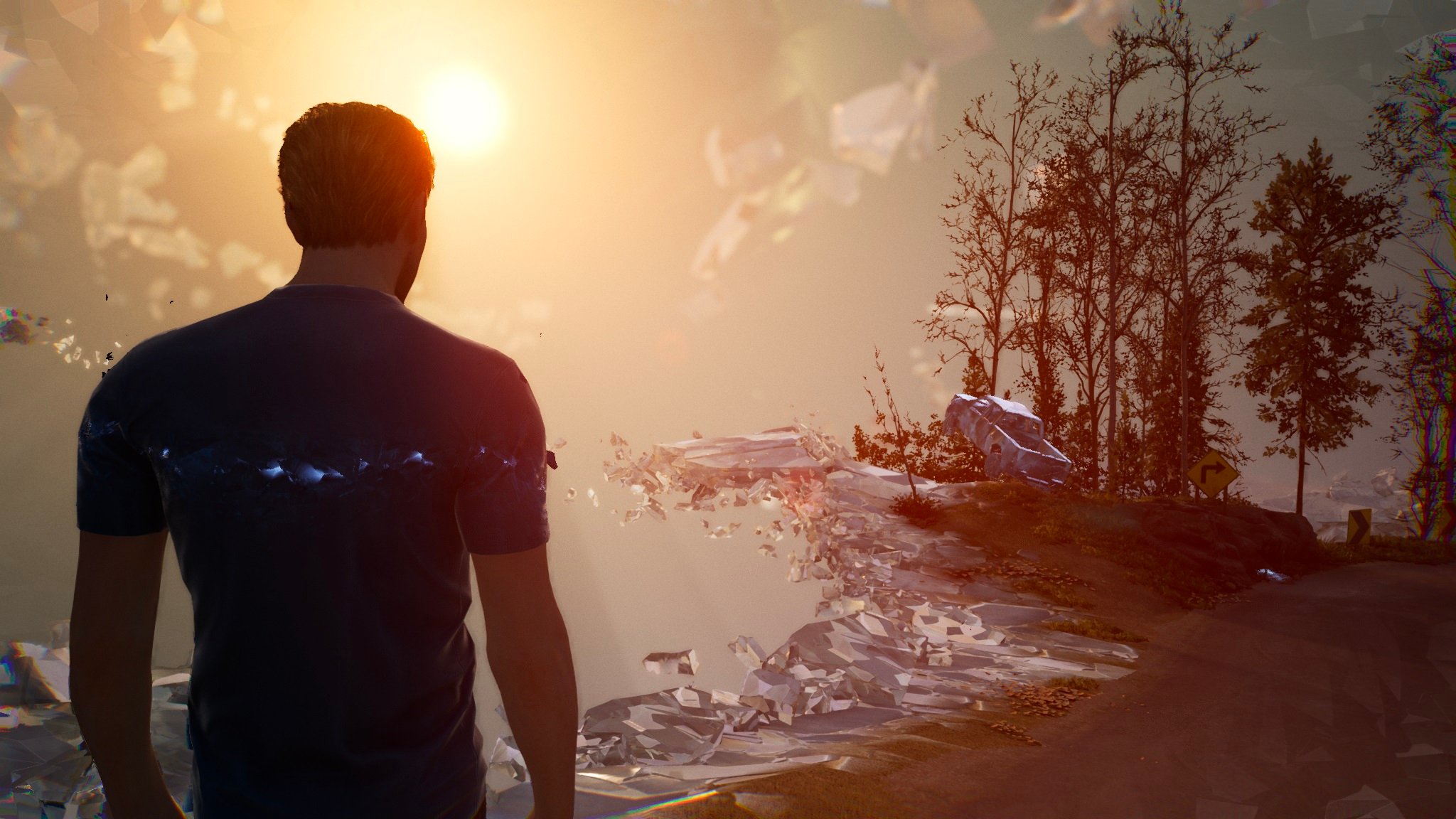 Things go further awry in Basswood. After a memorial wake gone drunkenly wrong, Sam awakens in the morning with a killer headache and a lot of blood on his shirt. He traces it back to the bar he where he blacked out and uses his investigative prowess to figure out that he got in a fight.

This is Twin Mirror‘s biggest hook. Sam goes to a place called his Mind Palace where he puts his analytical skills to work. It’s useful for mentally recreating crime scenes and figuring out exactly what happened. Think Will Graham in the Hannibal TV series or Willem Dafoe in Boondock Saints. (“THERE WAS A FIREFIGHT!“)

It’s a neat touch gathering clues and applying them to the case in real-time. Twin Mirror uses a hologram-like visual filter to aid in Sam’s recreation. When you see each step physically play out, it’s easy to piece together how that bar fight progressed from bellied-up squabbling, through a table, into a pillar, and eventually knocking over the memorial decorations. It’s also an evolution of the puzzle-solving and action in Life is Strange while still fitting within the same kind of framework. 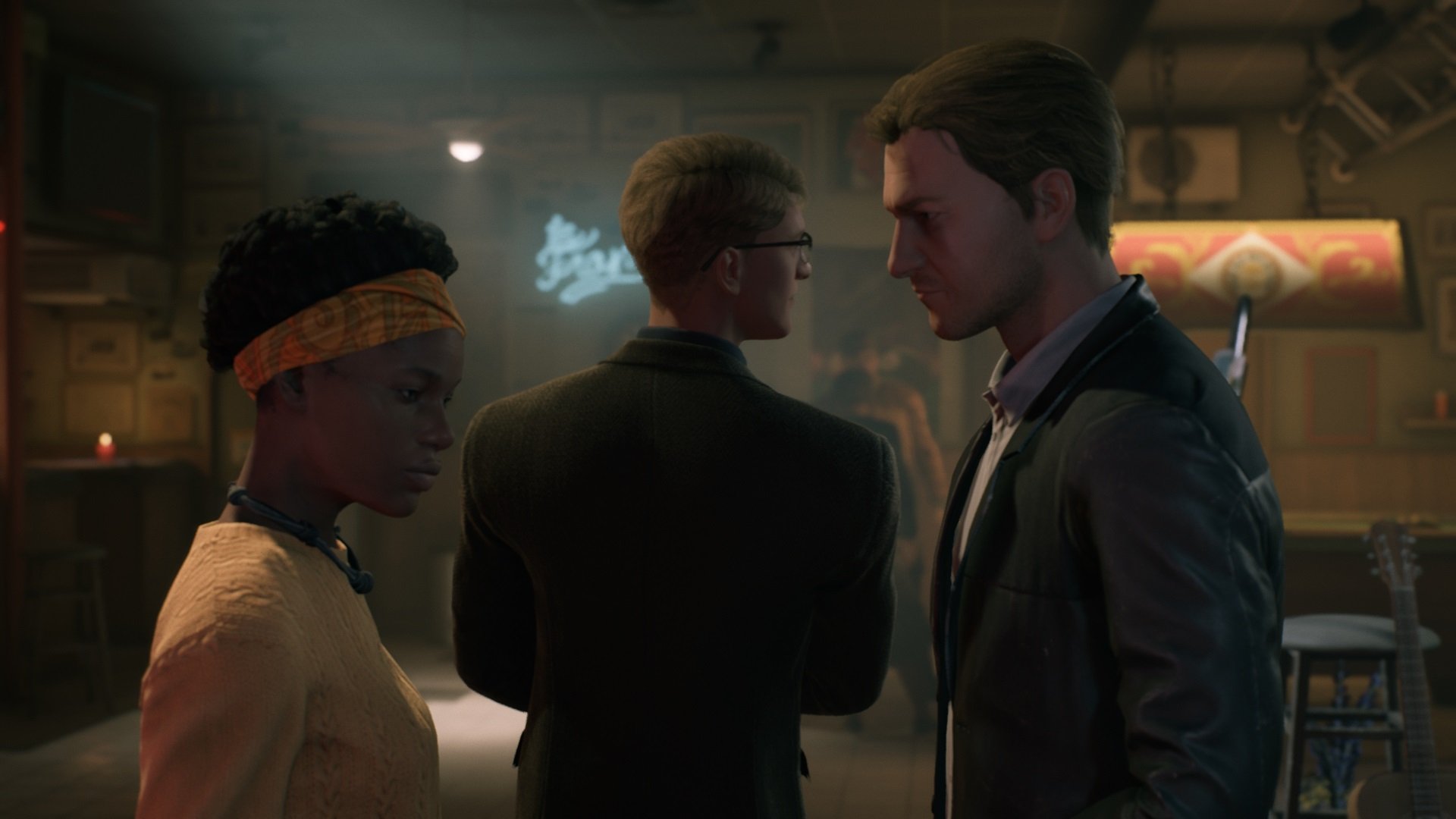 But most of Twin Mirror doesn’t seem like it’ll be that — at least judging by the two-hour demo I played. It’s going to be more Life is Strange than Sherlock Holmes. There’s a lot of leisurely exploration of limited-size spaces, chatting up anyone and everyone in hopes of building a world, and making friends and enemies in equal measure.

The opening hours do a hell of a job of setting the stage. The demo ended on a big ol’ cliffhanger, and I want to see this murder investigation through. However, it’s not the flashy violent stuff that most has my attention. I want to see how Sam’s failed relationships and his standing in Basswood shake out. I want to see how he influences the life of his grief-stricken goddaughter. I want to see if he gets his shit together. Like Life is Strange, Twin Mirror is best at making you care about the problems on the periphery of the biggest plot beats.

I’ve been here before. I just needed a little bit of time to piece it all together. Sam would be proud that I figured it out.

[Disclaimer: This preview is based on a PC preview build of the game provided by the publisher.]