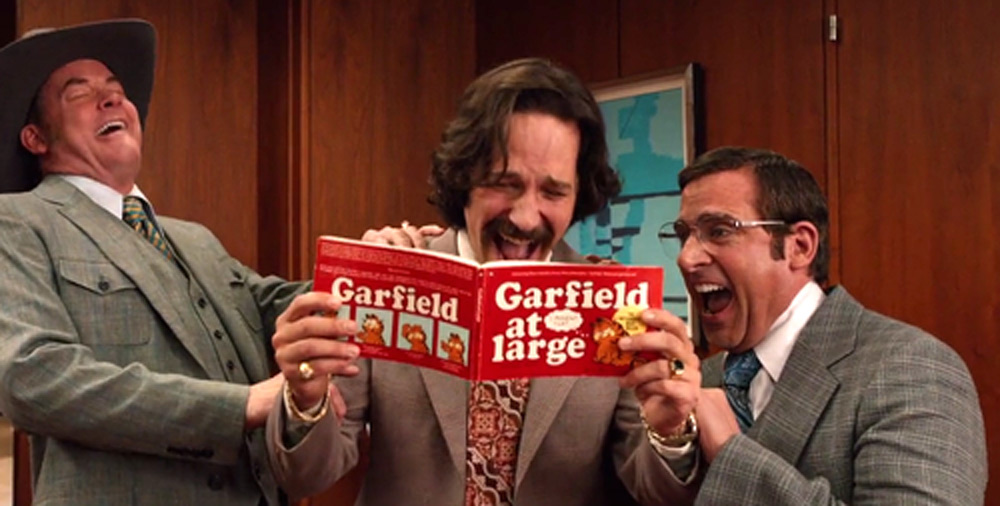 There was a time, eons ago, where the comic strip known as Garfield was okay. Nay, it was good. Back in the late ’70s and ’80s, the daily dalliances of Garfield, Odie, Jon, and, for a brief time, Lyman was decent shit in the funny pages of this nation’s newspapers, becoming the most widely syndicated comic strip in history. Suck on that, corpse of Charles M. Schulz.

Side note: if you are too young to know what a newspaper is, ask an older person, preferably one who drives around elementary schools in a panel van.

It wasn’t long before the cat leapt off the pages of the Sunday funnies and into the car windows of the nation’s mini-vans. Creator Jim Davis told the Washington Post in 1982 Garfield was created to be a marketable character. It wasn’t about being particularly funny nor relevant to the zeitgeist and social events, it was about making money. Bill Watterson, creator of Calvin & Hobbes, called another Davis creation, U.S. Acres, an abomination, saying Davis’ whole process is “an insult to the intelligence.” Garfield merch has brought in more than one billion dollars to Paws, Inc., the company tasked with licensing out the original Grumpy Cat. For fuck’s sake, Davis has been inducted into the Licensing Merchandiser’s Hall of Fame, as if that’s a hall that should even exist.

It all makes sense, knowing this cat’s history, that Garfield is present in so many awful mobile games. Actually, they’re not all awful. Some are worse but others are merely mediocre games that ape the success of another app with a cold, slimy slathering of that Garfield “charm.” Hop on Google Play and you can find Garfield Defense, Garfield’s Diner, Garfield Escape, Garfield Pet Hospital, Garfield: Survival of the Fattest, and more. All of these, some with download counts in the millions, are just poorer, Garfield-fied versions of games like Simpson’s Tapped Out, Canabalt, and The Battle Cats. Joining those games as of this past E3 is Garfield Go.

If for some reason you’re too dumb to figure it out from the name, Garfield Go is Pokemon Go but with Garfield. Instead of hunting down and trying to capture 151 of gaming’s most recognizable slave fighters, you’re looking for coins. Bringing up the map, an eyesore compared to the simple elegance of that found in Pokemon Go, will alert you to the many or extremely few coins around you that you must venture to. It completely misses the point of Niantic’s blockbuster app, the thrill of venturing out and honest-to-goodness discovery. In Garfield Go, you simply need only journey from point A to B if you want to feed the cat. Yes, you are not capturing Garfield, keeping him inside a tiny ball, and forcing him to fight for your amusement. No, you, armed with a donut, pizza slice, cake, or lasagna, are trying to feed him.

Pressing down on one of these coins, rare near my house in the east bay area but quite abundant in downtown San Francisco, brings up the feeding screen. Similar to the game it so shamelessly rips, you flick your food at the cat as the barely audible and frankly quite sad voice of Lorenzo Music emerges from your speakers, repeating the same, tired lines from television specials two decades old. The goal is to land the food in his bowl, which is easier said than done. When trying to feed him in AR, Garfield has a tendency to move around making some shots impossible. This food bounces, even flying through the body of orange tabby as if he wasn’t even there, so lazy he didn’t even bother showing up to his own game.

Succeed within three shots and the spoils of victory are yours. You can revel in such grandeur as a single panel from a “rare” comic strip that is freely available online, a new hat for Garfield, one of countless and pointless collectibles, or, if you’re lucky, a piece of a real gift card. I am 1/5th of the way to getting myself a $5 Amazon.com gift card and I will always only be 1/5th of the way of doing so.

There are no gyms here, because [insert unfunny joke about exercise from Garfield comic strip here]. Instead, you have Bistros, home to an extremely simple game of Simon that can net you an additional piece of food depending on how well you do. Food quickly becomes rare and my coins earned from successfully feeding this flabby feline soon dried up.

The game reminds you, because we as humans are fucking dumb, to be aware of your surroundings. Not just for traffic and potential hazards, but to make sure nobody sees you are playing Garfield fucking Go. I was originally going to end this piece commenting how this game and every other Garfield monstrosity on mobile fails to capture the essence of Garfield, opting to be a simple cash-in rather than something truly special. But you know what, these shallow, pointless, and offensively inoffensive games capture exactly what Garfield is.