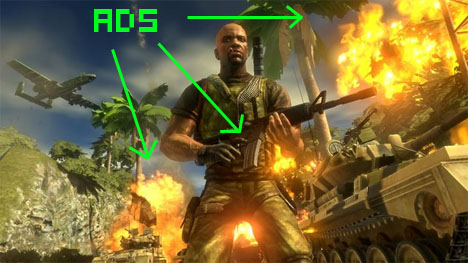 I don’t really have a problem with advertisements and product placements showing up in something like a free, browser-based game. I only tend to play them a few times anyway, so the ads don’t normally have a chance to get on my nerves. Ads in full retail games, on the other hand, are a totally different matter — especially after I already paid $50-$60 for it. Having my immersion repeatedly ruined by a bunch of Army recruitment billboards and Pepsi posters strewn wily nily about the environment can really tick me off.

Therefore, my first reaction upon hearing that Pandemic’s Mercenaries 2: World in Flames will have dynamic ad containing billboards was one of insurmountable rage. And I’d just gotten so hyped up over the recent footage. Bummer.

Lead designer Scott Warner was quick to explain that, while Mercenaries 2 will have ads, they will at least be implemented with some manner of creativity (if you consider explosions to be creative that is).

“There’s a faction in the game that actually doesn’t like the fact that the first world is coming in and plastering their cities with advertising, so they’ll actually pay you to blow up billboards. So if you’re like, “goddamn it, the Mercs guys put advertising in the game,” you can just blow it up.”