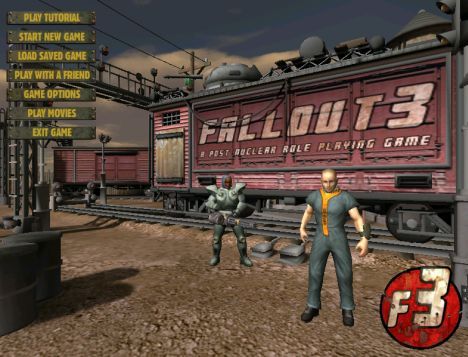 A demo getting released before a teaser? “Surely you are mistaken,” you must think. Well, we aren’t. Sort of.

It appears that No Mutants Allowed, the premiere Fallout fansite on the Internet, was not content to simply show us what project Van Buren (aka Fallout 3, back when Black Isles was still working on it) looked like. They’ve provided a download link for the tech demo shown in the aforementioned video, and it is, indeed, fully playable. Granted, it’s a demo to a game that was abandoned years ago and will never actually come to fruition, but it’s a demo nonetheless.

Meanwhile, on the official Bethesda Fallout 3 site (which, in case you didn’t realize, is completely unrelated to the above tech demo — the above was abandoned years ago, and now Bethesda is producing the “real” sequel), a timer has appeared. It is cryptic. It is brief. It is pants-wettingly surprising. It says the following:

We could actually get a Fallout 3 teaser by the end of June? I dunno about you, but I’m bookmarking this site and checking it everyday just to make sure my eyes haven’t decieved me.

Oh, and hit the jump for impressions on the demo.

The Van Buren demo is like sex, except I’m having it.

Granted, the combat doesn’t work, it’s buggy as hell, the graphics suck, and there are only two areas, but godDAMN — it’s Fallout. And that’s enough. Seeing the empty control chair of a Vault Overseer inside the demo has a strange, almost religious irony to it: the vault is missing its leader, just as the gaming community is missing the third entry in one of the single greatest RPG franchises of all time.

It’s eerie, seeing Fallout in 3D: it made me realize all the things I took for granted that were so special and specific to Fallout: the spear-style action cursor. The Mad Max-esque leather armor. The consider the way the protagonist never actually does an “open door” animation or “repair bot” animation, but instead relies on the same “extend arms, move hands alternately up and down as if milking a cow” motion for every single non-combat physical act. It’s one thing to see things like this in a dated, 2D RPG from the 90’s. To see it today, in realtime 3D, is nothing short of surreal.

NMA also has a guide for the demo, in case you get stuck (unlikely), or if you want to know more about its context (much more likely).

That being said, all the magic and mystery of the video Nex posted yesterday will be gone, should you download this demo. You’ll know exactly what we were missing when Van Buren died in development. You’ll no longer be able to wonder, hopeful, struggling to keep back tears as you recall fond memories of visiting The Glow and dying of radiation sickness.