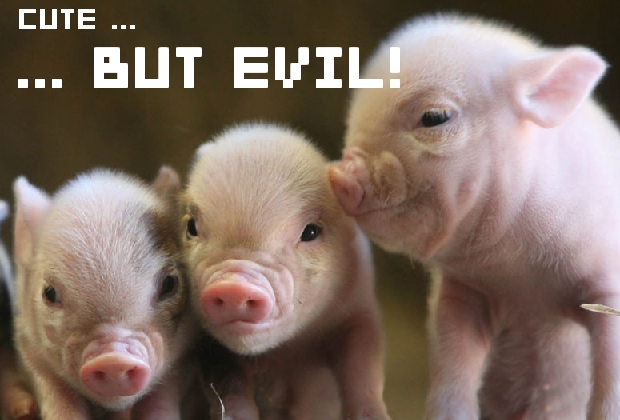 Sorry, I don’t mean to sound insensitive. The recent swine flu outbreak is a scary thing and it is awful that people have lost their lives because of it. But in the world of videogames, pigs have done a lot worse than just threatening humanity with a high fever and fits of coughing.

So if you want to be scared, don’t be scared of something that can be cured with some powerful antibiotics. Be scared of what the pigs of the world have the potential to do. If videogames over the years are any indication, swine have the power to accomplish things much more menacing.

Take off that surgical mask and hit the jump for a list of villainous pigs you should really fear. Oh, the (curly-tailed) horror!

As an original member of the Star Wolf team, Pigma was good friends with Star Fox’s father James McCloud until he betrayed him and left him for dead to join the evil Andross. In Star Fox 64 for the Nintendo 64, Pigma plots to kill Star Fox and friends to further his greedy intentions.

Reason to live in fear: Pigma will not only kill you, he will steal all your money and have sex with your girlfriend. In front of you!

Be prepared!: Just make sure the Arwing parked in your garage is powered up with two laser upgrades.

Like serial killer Jigsaw in the Saw movies, Piggsy is a deranged maniac that wears a pig head as a mask and stalks main character James Earl Cash in the super violent Manhunt for the PlayStation 2. While he is not an actual pig, Piggsy conjures up a terrifying image of what it would be like if pigs of the world could walk on two legs and terrorize us all with giant chainsaws. You know, as it is written in the Bible.

Reason to live in fear: Um … it’s a pig mask-wearing, chainsaw-wielding maniac. RUN FOR YOUR LIFE!

Be prepared!: Fight fire with fire. Turn off the lights, hide in the corner, and have a revved up chainsaw ready to strike when his back is turned.

The three little pigs featured in early Atari 2600 game Oink! aren’t really all that evil. In fact, they play victims, as they hurriedly try to repair the houses the Big Bad Wolf is slowly trying to destroy. But it’s hard to love these cute, pixellated pigs when the game they star in is so mind-numbingly awful.

The pigs themselves might not be villains, but Oink! is certainly criminal.

Reason to live in fear: After five minutes of running back and forth across the screen and doing the exact same thing you will either want to a) punch someone in the face or b) kill yourself.

Be prepared!: Just make a pact to only play videogames with good graphics and solid gameplay and you are all set.

After emerging victorious in all of the car, hovercraft, and plane races on his home world, the evil Wizpig from Nintendo 64 hit Diddy Kong Racing decides to journey to the peaceful Timber’s Island to compete in more races there.

While his motivations are odd to say the least, that doesn’t make villain Wizpig any less intimidating. Not only is Wizpig a killer behind the wheel of the game’s three vehicles, he uses his magic powers to turn the innocent creatures of Timber’s Island against Diddy Kong and all his friends! It’s kind of like if Paul Walker in Fast & Furious turned into a pig wizard and made Vin Diesel shoot Michelle Rodriguez in the face. Yeah, just like that.

Reason to live in fear: Worst road rage EVER!

Be prepared!: Pray your car has an “A” button. If not, get one installed and get ready to tap the heck out of it!

In the wacky Duke Nukem 3D for the PC (as well as many other platforms), the title character battles many different enemies in a post-apocalyptic Los Angeles in order to free Earth from a race of ruthless aliens. While the action game parody is filled with many humorous moments (and a lot of half-naked women), the Pig Cops — the main enemies in the game — offer quite a challenge as they do anything in their power to capture and/or kill the one-liner spewing Duke Nukem.

Be prepared!: A wide variety of weapons can bring the Pig Cops down. Even better, a bunch of these weapons can be made at home (pipe bombs!).

The Pigmask Army in Mother 3 for the Game Boy Advance is composed of a wide variety of soldiers that wear pig-like gas masks. At the beginning of the game, the Pigmask Army invades the peaceful Nowhere Islands. In addition to performing horrible experiments on the islands’ animals and plant life, the Pigmasks also introduce the people to advanced technology, turning the islanders into mindless zombies.

Reason to live in fear: Unless you are afraid of technology, there is no reason at all to fear the Pigmask Army. FREE PLASMA TELEVISIONS IN EVERY HOUSE! Well, I guess there is the whole “brothers are forced to turn against each other” thing. Yeah, maybe you should fear that.

Be prepared!: It might be easier to dust off your childhood baseball bat, but if you can learn PSI, that’s your best bet.

In the first Tomba! For the original PlayStation, the odd caveman hero had his over-sized hands full holding back a giant army of Evil Pigs that threatened to take over the world. In the sequel (also released on the PlayStation), the Evil Swine return and this time make things a little more personal by kidnapping Tomba’s girlfriend! Using a wide variety of weapons and traps, the Evil Swine try their darnedest to seek revenge on the unlikely hero that previously defeated them.

Reason to live in fear: The Evil Swine are more annoying than anything. If kidnapping a loved one is not bad enough, the pig nuisances will have no problem burning down your village. Or jumping on top of you with their giant bellies. Or building a giant contraption to steal your only water supply. Persistent little buggers.

Be prepared!: Just go to your local circus, give the ring leader 30 pieces of ice candy, and he will reward you with the perfect weapon to defend yourself against the Evil Swine: a Pig Ball!

Obviously inspired by classic fairytale The Three Little Pigs, the three boss pigs at the end of the Mario Zone in Super Mario Land 2: 6 Golden Coins for the original Game Boy ruthlessly attack with three different special attacks in order to bring Mario down. Each of the Three Little Pigheads waits in a different house (straw, wood, and brick) and take turns pounding on the agile plumber

Reason to live in fear: They are the destroyer of childhood memories! What was once a cute story about three pigs hiding from a scary wolf has turned into three monsters trying to murder a helpless plumber. What’s next? Prince Charming raping your electrician?

Be prepared!: Buy a pair of cleats and practice your jumping skills.

Ganon (The Legend of Zelda)

The ultimate pig antagonist. Ganon, the iconic videogame villain, made his debut in The Legend of the Zelda for the Nintendo Entertainment System, and has been kidnapping Princess Zelda and terrorizing hero Link for years since.

Starting off as the shady human Ganondorf, the Gerudo thief does not reveal his true power until he morphs into the pig-like Ganon, the possessor of the Triforce of Power. Once Ganondorf becomes Ganon, his sneaky and manipulative ways are replaced with the strength and power of a giant beast. A giant, seriously evil beast.

Extra evil bonus points for having one of the best and most memorable videogame laughs of all time (see: the Game Over screen from sequel The Adventure of Link).

Reason to live in fear: Oh, I don’t know, maybe the fact that Ganon will violently kill you and then turn the entire world into a desolate wasteland, destroying everything you have ever loved?

Be prepared!: I have no idea where to buy them, but stock up on silver arrows. Home Depot, maybe? Target?

As you can see, the pigs of the world could do a lot worse than the swine flu. The next time you freak out after a harmless sneeze, just think about what could have been: a world full of kidnapping, arson, betrayal, murder, BAD GRAPHICS! It is all too upsetting to even type.

Let’s just all be thankful that the adorable pigs of the world aren’t even half as notorious as the swine featured in videogames.

Bring it on, swine flu. We are no longer afraid of you!