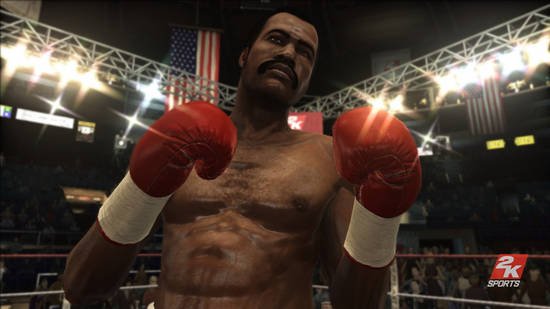 This afternoon, 2K Games blew up my inbox with the official Xbox 360 box art for their upcoming title Don King Presents: Prizefighters. The look is minimal, with a boxer’s silhouette (that’s you!) taking up most of the space and a creepy little Don King sketch highlighting it all.

2K Sports’ official press site also had a little batch of new Prizefighter screens, most of which I believe are new. What’s particular funny about the set of screens is that one is simply a photo of Don King. Not an in-game render, mind you, just a photo. This is likely from the game’s documentary-style cut-scenes — the game will follow the career and rise to stardom of your very own boxer. Still, I’m amused, because that’s what happens when I see Don King.

Honestly, I’m looking forward to getting my hands on this one. I’ve always had a soft spot in my heart for boxing videogames, ever since I imported Evander Holyfield’s Real Deal Boxing for the Mega Drive when I was a kid. I think it cost me $70, but it was worth every lawn mowed,* God damn it.

Don King Presents: Prizefighter for the Xbox 360 will be available this June.

* Truth be told, I don’t think I’ve ever mowed a lawn in my life, so I have no clue how I was able to afford the import. I shudder to think I was able to convince my parents to shell out that kind of dough for Real Deal Boxing, of all things …