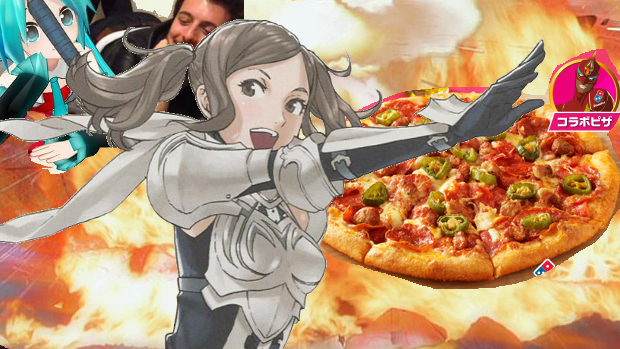 Domino’s “pizza” is terrible junk I wouldn’t eat if I’d ingested a poison for which the only cure was the exact blend of possum endocrine system and Nickelback sweat found in Domino’s pizza.

That said, Domino’s Japan is at least fun. Last year they had an amazing campaign with my good friend Hatsune Miku. Now they’ve got something called the “Fire Emblem” pizza. “Girls love hot boys,” the pizza description reads. “Same with pizza. Try this pizza, the zingy heat of the jalapenos will surely get you hooked.”

Unfortunately, it’s named after a Tiger & Bunny character and not based on the Nintendo property. What happened to considering licensing options, Nintendo? Pick it up. You went the entire first year of Luigi without a Luigi’s Pizza. Don’t make that mistake again in this, the second year of Luigi. How about Donkey Kong sponsor a banana eating contest? Or a Kirby sex toy? Don’t make me think of everything.