It’s about emotions and stuff

Doki-Doki Universe is a simple game to grasp but a hard one to describe at first. Basically, you play as a robot named QT377665 (or QT3 for short), who’s just discovered that its entire line has become obsolete thanks to their lack of humanity. An alien named Alien Jeff then tasks you to help humans all across the galaxy in order to learn about humanity.

Weird, but the concept makes sense once you realize that the creator of ToeJam & Earl, Greg Johnson, is behind this. Even more interesting is that a large portion of the game will be completely free for you to play on the PlayStation 3, PlayStation 4, and PlayStation Vita.

The free portion of Doki-Doki Universe allows you to freely travel across the game’s universe atop various mounts you discover, such as a flying poo with little bird-like wings that is both cute and disgusting at the same time. You can also take personality quizzes that are quirky in their own way.

Quizzes are multiple choice, and you’re not really supposed to think too hard about them. The one I took asked me what side was I on: ice cream or utensils. I selected ice cream, which meant that I’m adventurous. Odd, but I was told there’s real science behind these quizzes.

Completing quizzes also gives you objects based on your personality, which will go toward decorating your home planet. Every player can create their own custom planet that your friends can then visit. 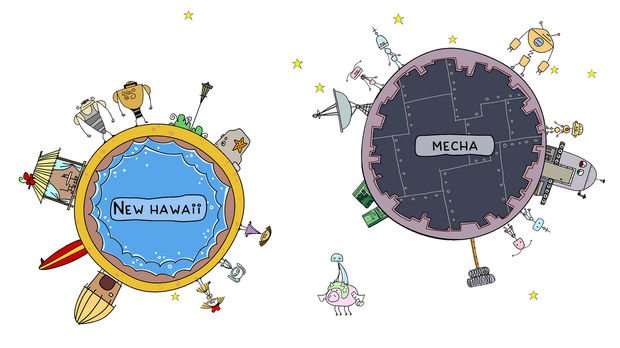 The universe is filled with planets to visit, but you can’t actually touch down on them unless you purchase the full game. Once you do have the full game, you can land on the different worlds in order to assist QT3 in his quest for humanity.

The planet I saw was about human love and devotion, a concept that QT3 believes is akin to constipation. I came across a girl who thought her boyfriend didn’t love her anymore, but unbeknownst to her, the boyfriend died and is actually right next to her as a ghost. QT3 can see the ghost, and you’ll have to find a way to help the two out through various means.

There are over 100 characters for you to interact with across a bunch of different open worlds, and you’re able to take on dozens of tasks at a time. Their stories will change and evolve over the course of your game, so you’ll have reason to revisit locations. Exploration is a big part of the game as well, and things you find in the worlds will all benefit you in some way.

It’s a good think Doki-Doki will offer part of itself for free. It’s really one of those things where you’re going to have to play for a little bit before knowing whether you like it or not. I’m definitely interested, as the art, world, and writing are all very charming, and the whole aspect of discovering humanity is very unique for a videogame.