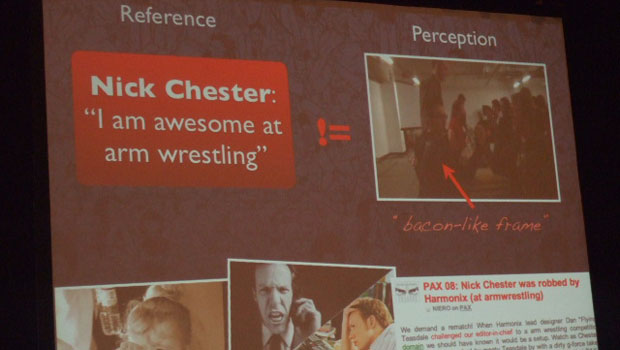 Not long ago, we laughed at the rumors of LEGO Rock Band. The idea was simply too absurd to consider. Or is it?

When GDC producer Think Services posted up an early version of Dan Teasdale’s GDC presentation slides, the Harmonix designer probably didn’t realize that also included a slide that made mention of a LEGO title. On one slide which showed a flowchart of upcoming titles, the word “LEGO” is snuggled between talk of the PlayStation Portable title Rock Band Unplugged and the forthcoming The Beatles Rock Band. Any reference of this was removed from the presentation we attended at GDC.

A few things could be happening here. One, Harmonix and MTV Games could have planned to announce said game prior to GDC; when it was not, Teasdale was asked to remove the reference in his presentation. The other theory (and this is mine out of sheer hope, because the idea of LEGO Rock Band sounds terrifyingly stupid) is that Teasdale added it to his slide as a sarcastic wink-nudge to the rumors that had been floating around. Perhaps Harmonix PR thought even a joking slide would snowball into something bigger, and asked him to pull it. (Case in point: all of the stories about this slide floating around the Internet.)

The latter is not completely out of the question, considering Teasdale also dedicated three slides talking about how he beat me in an arm wrestling match (shown above). This, of course, is completely untrue; most of what Teasdale said in his GDC presentation can’t be trusted. He cheated when we arm wrestled. There’s even video proof somewhere. Cheater.