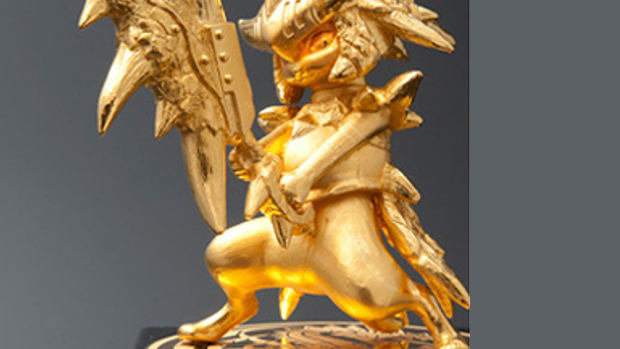 Does it have a dick, though? We at the Destructoid virtual office thought it might. “does it…does it have a lil dick?” I asked.

I looked up other Otomo Airou for reference. For a moment, I thought I’d figured it out. In the gallery below, there’s a non-solid-gold Otomo Airou that had similar armor and weaponry. There, a flourish on the sword looked like a lil dick. Yet, if you look closely on the gold figure, the sword hilt is different, abridged, coming in at the belly for support. It looks top heavy. Though the hands-apart grip in the non-gold figure probably gives more balance than the baseball bat grip of the gold figure. Regardless, it isn’t the scabbard causing a trick dick here.

Had Capcom provided clearer, larger images, we could perhaps search Schrödingers’ cat’s dick for penile spines. Human penises have since lost their penile spines — hard tissue barbs that pricked through the outside of the male sex organ — but cats still have penile spines. Unfortunately, this is currently inconclusive thanks to the photo quality (have you tried to look at your cats’ penile spines? It’s tough).

There is a chance that this possible penis, this could-be cock, is actually the result of forced perspective and symmetry. Both provided images share perspective. If you look towards the bottom right (the cat’s left hip), there appears to be a two-pronged  flowing pelt or ceremonial armor flourish. Should it be symmetrical, it could be that one prong on the other side (the cat’s right hip) is being obscured by the haunch and the other forcing the perspective of penile presence.